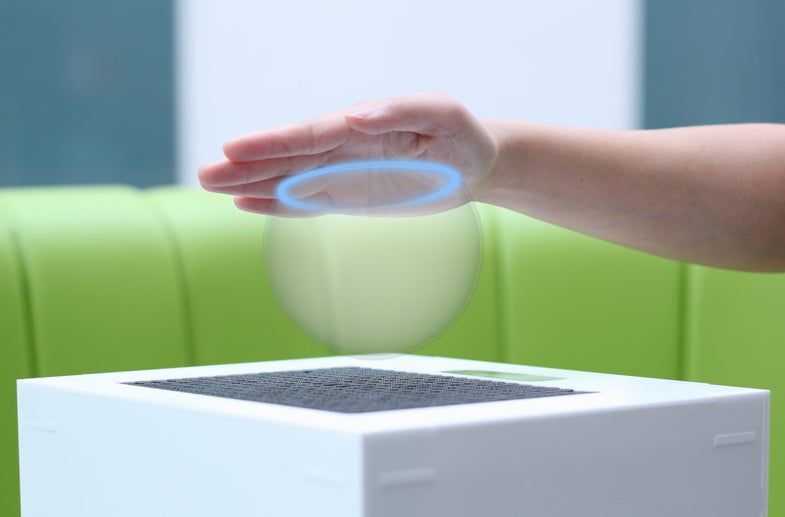 It used to be the case that if you wanted to reach out and touch someone, you had to use your hands. But thanks to scientists in the U.K., you might some day be able to use technology–and no, we’re not talking the telephone–to transmit the emotions you experience to someone else via touch.

A study conducted by Dr. Marianna Obrist at the University of Sussex has established that touches to certain parts of the hand tend to be interpreted as specific emotions. For example, contact to the outer part of the hand is generally seen as negative; unhappy emotions are triggered by touches to the area around the pinky, while tactile sensations in the index figure are more positive. (Obrist’s study did not, however, show a physiological reaction from the touches.)

Obrist used a system to test the emotional impact of the study’s participants called Ultrahaptics, which uses directed bursts of air to trigger those emotions via haptic–or touch-based–feedback. Though the UltraHaptics device is bulky and sits on a desk, the researchers envision a day when the same end result could be accomplished by a bracelet worn on one’s wrist.

It’s hardly a far-fetched idea, especially given the current intense interest around both haptics and wearable technology. Take the soon-to-debut Apple Watch, which uses a specialized Taptic Engine to deliver silent notifications that feel like someone is tapping you on the wrist. The Watch can also be used to send one’s heartbeat to a friend or loved one, which they then experience as a series of taps on the wrist. Granted, in many cases that might seem too intimate, and it potentially conveys fewer distinct emotions than Obrist’s system.

Beyond just the ability to communicate emotions between two people, the Sussex researchers also propose the idea of a one-to-many relationship where, say, a performer could ‘send’ emotions to audience members who raise their hands into the air (though probably not like they just don’t care).