I Played The ‘Star Wars Battlefront’ Beta, And Died Repeatedly 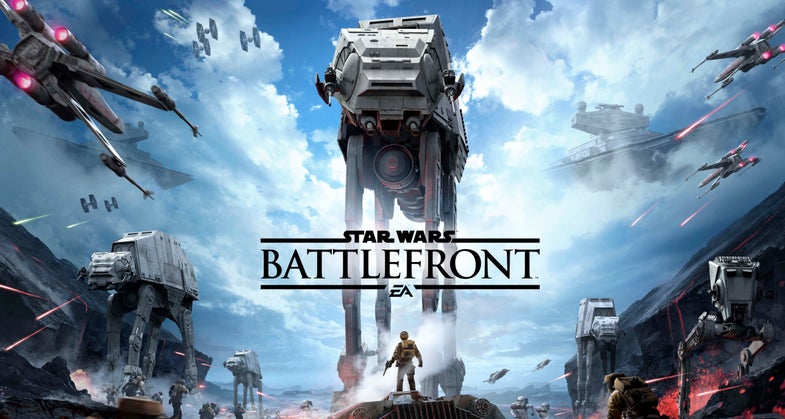 Another chapter in the year of Star Wars begins today, with the launch of Dice’s Star Wars: Battlefront open beta. The beta is more like a demo, with limited game modes: there’s a survival mode where you play against a horde of enemies, an 8-player vs 8-player firefight mode called “Drop Zone,” and the Battle of Hoth. If you’re like me and sat in a basement playing the Battle of Hoth repeatedly in the original Battlefront, then all we’ve been dreaming of is riding a Tauntaun again for the past 11 years.

I loaded up Battlefront on my PC (~10GB download) and booted it up. Hoth was the only thing on my mind. You know what they say: If you can’t handle the Hoth, stay out of the kitchen. And as a relatively bad gamer, let me tell you—I should have stayed out. Hoth proved to be a brutal, unforgiving planet for the Rebels, and an altogether easy target for the Imperial fleet.

Battlefront‘s controls are much like other first-person shooters. Standard movement, aiming, and usable items. Teams can have up to 20 players on each side in the Hoth game mode, which leads to mass mayhem, especially in large, open battles. Most vehicles are primarily mouse-controlled on the PC, with different weapons mapped to number keys.

My first game, I was an Imperial Stormtrooper, ready to stamp out the wretched Rebel resistance. In the game, you can spawn on a randomized point, or off another teammate. I do not have the tactical know-how to make either of those really work for me, so I would arbitrarily pick whichever one brought me closer to the action. When your reticle is on an enemy, it turns red, and the enemy’s name and health appears. Health in Battlefront is a bar out of 100, which regenerates if you step out of battle for a few moments. In my experience, enemy players seem to have an unlimited amount of health, while you are killed in one shot. My teammates’ kill/death ratios point towards everyone on each team having equal health, however.

One of the most fun aspects of Hoth are the vehicles. Little TIE fighter and AT-AT icons hover randomly around the map, and if you step in them and press “4” (and don’t die), you’re removed from the map and put into a vehicle. There are more options for Stormtroopers than Rebels. The Imperial army commands AT-ATs (big, four legs), AT-STs (smaller, two legs, susceptible to Ewoks), and TIE fighters. The Rebels have A-wings and X-wings, which are great for aerial battles, but tough to use against ground troops. I never saw a Y-wing icon, but saw them flying around. The aerial vehicles are difficult to fly, in my opinion, with wide swings to turn. If someone gets behind you, you’re pretty much done. (Then again, I went 1-22 in my last game.) And to my ultimate anguish, there was not one Tauntaun. I want my Tauntaun.

However, there’s no better feeling in this game than stomping through your enemies in an AT-AT. The firepower superiority is unreal, as you are ostensibly invincible and have unlimited heavy ammunition. There are times when the AT-AT’s shields are deactivated, but after playing at least 6 games, I never saw one of the two on the map get below a quarter health. (I even tried divebombing an A-wing into one without shields, to little avail.) Rides in the AT-AT last one minute, so savor every second.

Heroes, like Luke Skywalker and Darth Vader, are also playable characters. I was almost Darth Vader, but someone shot me as I was activating the item. However, I did get killed by Luke Skywalker as a Stormtrooper, and it was terrifying. He just ran up and sliced me in half. I had no defense. When I was a Rebel, I was with about four other players, and Darth Vader was walking up to us. We all fired, and he used his lightsaber to deflect every single shot. He killed us all. Heroes are powerful.

All in all, the Star Wars: Battlefront beta by EA and Dice is 90 percent of everything I wanted it to be. It’s fun, easy to get into, and even one level has total replay level. If you have a PC, XBox One, or PS4, you can download and play the beta right now. I recommend doing just that.