Physicists Figure Out Why Honey Falls In Twists 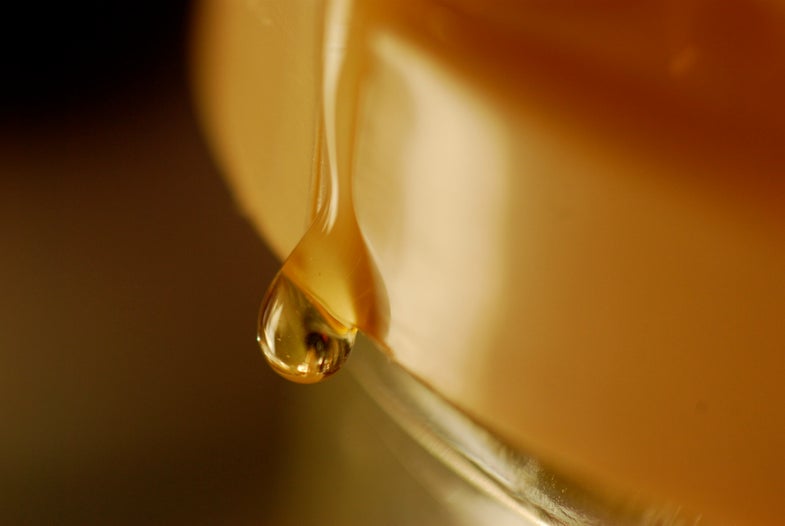 A stream of honey falls onto a freshly baked buttermilk biscuit. Before you devour this breakfast treat, you might notice that the honey you poured formed a wavy pattern on the biscuit’s surface, an unintentional decoration for your morning snack.

Most people might think ‘huh, that’s weird’ and then eat the biscuit and move on with their lives. But some physicists who noticed the weird twists and turns of honey have taken it upon themselves to figure out why honey and other viscous liquids (and even rope or threads) sometimes take such a strange and winding road towards a moving surface. In this case, the moving surface is the biscuit–you didn’t want your honey to be pooled in one spot, so you drizzled it across the entire thing. In a new paper published in Physical Review Letters some scientists think they’ve figured out why honey behaves this way.

To get a better idea of what the physicists were looking at, check out the video below showing honey being deposited on a conveyor belt. As the conveyer belt slows down, the honey begins to waver, forming waves, and then neat coils on the conveyor belt.

If the honey was being drizzled straight down it would also form coils, kind of like a spring. But these scientists were particularly interested in why honey and other viscous (thick or sticky) liquids formed curly patterns on a moving surface. They found that two things primarily determined how the honey would fall; the point where the honey hits the moving surface and the angle between the stream of honey and the surface at that point.

It might seem like a weird thing to study, but knowing why waves and coils form could be very helpful to engineers trying to lay undersea cables (which can behave like ropes, very similar to streams of honey) or people working with 3D printers, which often use a viscous liquid to build their designs.