Despite best intentions, a toxic legacy roars back to life in Colorado 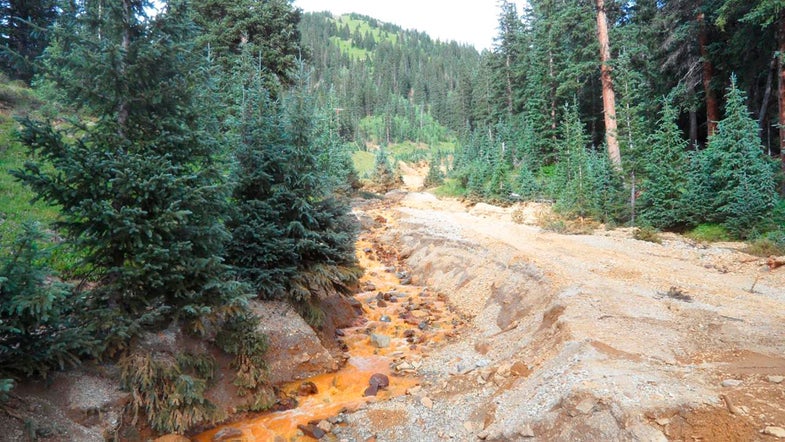 Yellow mine waste from the Gold King Mine is seen in the river waters near San Juan County, Colorado, in an EPA photo captured on August 7, 2015. REUTERS/EPA Handout
SHARE

They say no good deed goes unpunished, and the recent [Gold King Mine][1] spill in Colorado is a case in point. Earlier this month, on August 5, workers under EPA supervision were investigating the mine as part of a broader plan to prevent contaminated water from reaching Cement Creek, a tributary of the Animas River near the town of Silverton. Instead, the activity touched-off a spill of approximately 3 million gallons of mine water, colored bright orange by dissolved metals and other contaminants.

The spill sparked a media firestorm in anticipation of an ongoing environmental disaster at the hands of a much-maligned federal agency, but little more than a week later the worst of the crisis has faded.

Though metals settling into the sediment on the river bed remain a concern, the initial “pulse” of contamination [dissipated in about an hour][2]. By August 10, the EPA was reporting that the plume of orange was [no longer visible downstream][3].

In an early-morning [press release][4] on August 13, the EPA stated that its analysis showed that water samples collected earlier in the week in the Silverton area had returned to “pre-event conditions,” and later that evening announced that downstream conditions were also “trending” to previous levels.

In addition, containment ponds hastily constructed by EPA are, providing partial treatment to the “normal” runoff from Gold King. Mine water from Gold King now flowing into Cement Creek is [less contaminated][5] than before the accident occurred.

As for those “pre-event” conditions and that “normal” runoff, therein lies the real story.

Gold King is just one of hundreds of abandoned mines dating back to the 1850s in the Silverton area, known to EPA as the [Upper Animas Mining District][6]. Generations of unregulated discharges in the area have left Cement Creek, and the upper Animas River, largely devoid of fish and other aquatic life.

Since the 1990s, a number of these sites have been the object of remediation efforts aimed at improving water quality in the Animas. Those efforts coincided with the 1991 closure of the Sunnyside Mine, the largest and last remaining “major” operation in the area.

Local and mine industry stakeholders successfully lobbied EPA to keep the area off the Superfund National Priorities List, partly out of concern for the region’s tourist industry. Instead, cleanup efforts have been coordinated by a volunteer consortium called ARSG, the [Animas River Stakeholders Group][7].

The seeds of trouble for Gold King were sown in 1996, when Sunnyside was permitted to shut down its treatment plant— an effective but expensive way to stop pollution from mine discharges — and switch to the less costly method of simply plugging the mine works with concrete.

According to Mark Williams, Professor of Geology at the University of Colorado – Boulder, the results were predictable. “The current state of the art for mine discharges is to collect the water and pipe it to a treatment plant,” explains Williams, a seasoned expert in mountain range research and a Fellow of the American Geophysical Union. “It’s expensive and it’s permanent — as soon as you stop doing it, everything goes to hell.”

The work on Sunnyside took place between 1998 and 2002, but while the plug solved problems at there, it apparently kicked off a classic case of whack-a-mole.

In 2002, [ARSG reported][7] that the nearby Gold King mine was beginning to discharge “significant amounts of acid mine drainage.” The current rate is [213 gallons per minute][5].

EPA notes that two other nearby sites — the [Red and Bonita Mine][8], and the Mogul Mine — also experienced “significant increases” in discharge, coincident with the Sunnyside work. 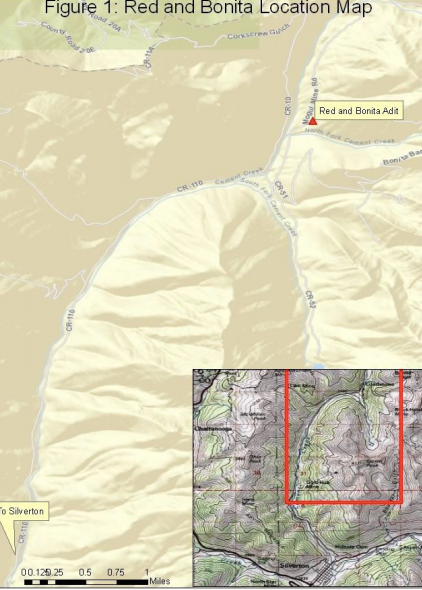 EPA Map of Red and Bonita Mine region near Animus River

Meanwhile, according to the EPA’s current information, water quality in the Animas stopped improving after 2005 and has “declined significantly” for a stretch of at least 20 miles below the river’s confluence with Cement Creek.

To Williams, the results of the Sunnyside mine plug were predictable.

He suggests thinking of the mountain occupied by Sunnyside and the three other mines as a multistory building, with Sunnyside on the first floor. As Williams describes it, rain and snow fall on the roof and trickle down to the first floor, and run out the door. When the door is plugged, the water has nowhere to go and it will continue to rise floor by floor, from Sunnyside to Red and Bonita, Gold King and Mogul.

While hazardous conditions in Red and Bonita have prevented efforts to determine exactly how the water could rise from one mine to another, natural fractures and uncharted mine shafts are the likely culprits.

According to Williams, the EPA had warned state officials of this very potential before the Sunnyside work began.

That is not to say that mines should never be plugged. The lesson is that such work should be undertaken with a Plan B prepared in case of unintended consequences, namely, discharges from other potentially connected mines.

Evidently, ARSG had no Plan B. That left the EPA to play catchup.

Remediating the increased discharge at Red and Bonita became a priority, and that brings the story back around to Gold King.

The future is murky

The work at Gold King was designed to monitor and prepare for unintended effects of the Red and Bonita remediation. The project — which, like Sunnyside, involves a cement plug — was on track for this year. However, those plans are now most likely on hold.

On August 12, EPA Chief Gina McCarthy announced a moratorium on virtually all mine remediation work nationwide until the cause of the Gold King blowout can be determined. Which means, once again, it looks like a long road is ahead for fixing the Animas River once and for all.