The fastest way to chill your beer

For an icy drink in under 10 minutes 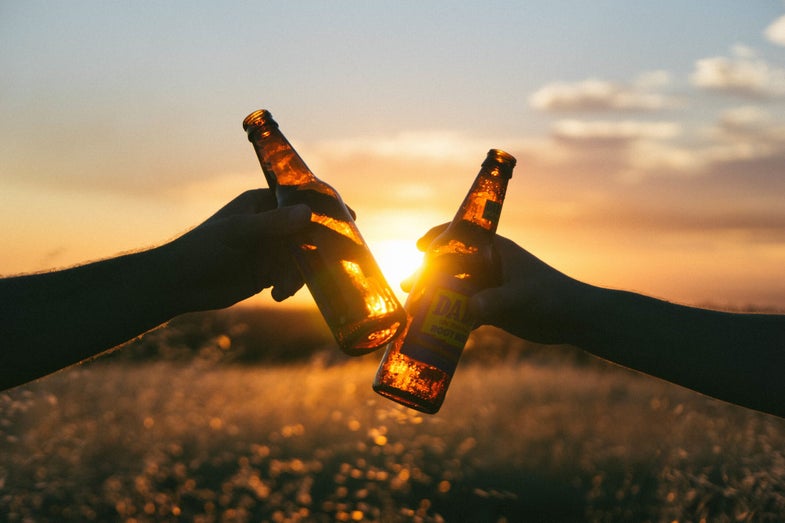 You always forget to chill the booze. Somehow the burgers get prepped and the decorations get hung, but fifteen minutes before the cookout begins, you’re stuck with lukewarm beer.

Well, not anymore. Because if there’s one thing science can help us with, it’s thermodynamics. And that’s really all this problem is—how do you lower the temperature of a liquid inside a metal can (or glass bottle) as quickly as possible?

This is the most basic and practical way to cool drinks, because virtually everyone has the materials to do it. The process is simple:

Why salt water works so well

Plain water freezes at 32°F. Salt water can get much colder than that and still remain a liquid. You might remember this from your high school chemistry class—it’s called “freezing point depression,” and it happens because dissolving salt in water lowers the liquid’s freezing point. Table salt breaks down into sodium and chloride ions, which physically interfere with water molecules’ ability to form the crystalline structure we call ice. This means the solution has to be colder than normal in order to freeze.

Now, back to beer chilling.

If you put your beer in an ice-water bath, it will cool the beer fairly effectively because liquid conducts heat well: The icy water pulls heat from the beer; the beers gets cooler. But no matter how much ice you add to a standard water bath, it will only ever reach temperatures just above 32°F. If it got any colder than that, you’d just end up with more ice. Even if you keep your ice at 0°F, the standard temperature for freezers, once it melts into ice water, the liquid won’t get any colder than that 32°F sticking point.

So what happens when you add salt to the bath? Because salt lowers the melting point of water, if you add salt to ice, the ice will melt. You might assume that, because the ice is melting faster, the salt has somehow heated up the ice faster than normal. But that’s not what’s happening—the salt isn’t raising the temperature of the ice; it’s converting ice into salt water of the same temperature.

Salty ice water can get much colder than regular water, though. While salty 0°F ice will still melt, its temperature won’t increase to 32°F like it would in regular water. Instead, the salt will turn it into 0°F water. Combined with the rest of the water in the bath, you suddenly have a watery, salty slurry that’s well below 32°F. And because the water bath is colder, your beer will chill faster.

But what if you spin the bottles?

In case five minutes is too long to wait, there is one more thing you can do to speed the cooling process along: Spin it! (Pull it! Bop it!)

Water is already a great heat conductor, but it still takes time for heat to transfer from the beverage inside the bottle or can to the bath outside it. Inside the container, the beer along the edges will be slightly colder than the fluid at the center. Likewise, on the outside of the container, the water closest to the beverage will be slightly warmer. You can alleviate some of that unevenness by spinning the bottles (gently, so as not to shake them up). This will speed up the heat redistribution from beer to water.

One company seems to sell a device explicitly for this purpose, though if you haven’t thought to chill your beer yet, it’s unlikely that you thought to buy a special gadget to do so. In a pinch, you could rig up a spinning device from a can of compressed air. Or hook up a bottle to a power drill—just remember to remove the drill bit so you don’t put a hole through the can.

Alternatively, just wait the five minutes for the salt bath to work. It’s not worth interrupting your celebration for a trip to the emergency room.