Pop some science with Pop Sci 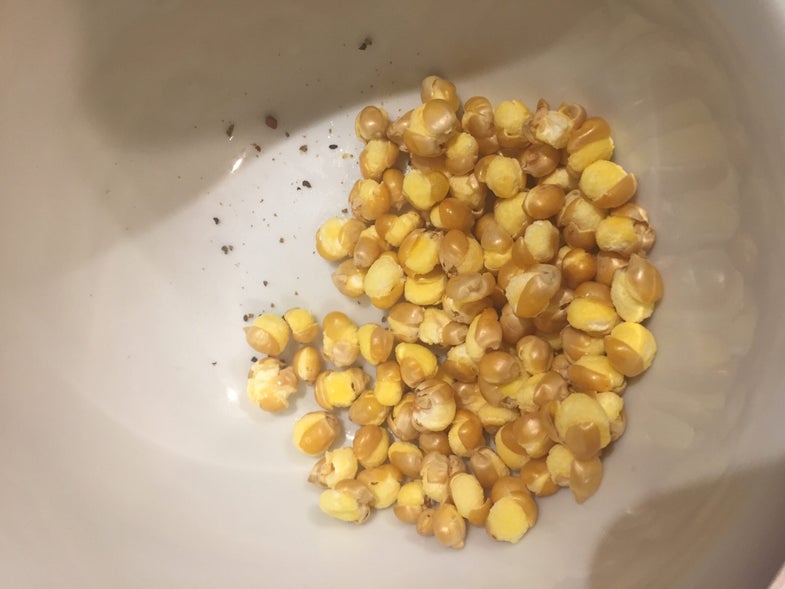 I’m obsessed with the little half-popped “old maids” at the bottom of the popcorn bag. I love the blast of intense popcorn flavor paired with a tough crunch. I routinely ate unpopped popcorn kernels as a kid just in case one would have the texture I craved. I first had Halfpops-brand half-popped popcorn at a snack convention five or so years ago, and I know exactly which kiosks at the airport have them so I can stock up whenever I fly.

Here at Popular Science, we got an unsolicited shipment of Halfpops last week as a part of a promotion for a bizarre coding contest where hackers solve coding puzzles, and then receive Halfpops in exchange for promising to protect the Halfpops staff in the event of an artificial intelligence apocalypse. Work stopped while the perplexed staff snacked on the partially popped popcorn kernels like the ones you find in the bottom of a microwaved bag, crunchy like corn nuts but with a popcorny flavor and a healthy dose of hulls that got stuck in our teeth.

While the patent is available online, Halfpops by no means has a monopoly. So I decided to join the club and make them myself, and you can too.

Popcorn kernels have an outer shell called the pericarp and a meaty, starchy inside called the endosperm. Their moisture content is around 14 percent. The kernel pops when it’s heated because the moisture turns into steam. The hull cracks when the steam’s pressure builds up too high, causing the mass to explode. Meanwhile, the endosperm gets riddled with tiny bubbles from the steam. When the pericarp cracks, the pressure inside is abruptly released, which causes the endosperm to explosively decompress, and puff out into a starchy foam: the fluffy snack you’re used to.

The pressure required for the steam to breach the hull is around nine times the pressure of our own atmosphere, according to an article on the Carolina Science Supplies company website. That’s about the same amount of pressure that’s inside slightly overinflated road bike tires.

The Halfpops folks raise the moisture content in the kernels prior to popping to around 30 percent by boiling them first. Boiling weakens the hull, decreasing the amount of pressure required for the little explosion. The excess moisture also changes the conditions inside the endosperm, preventing the foam from forming into an airy corn cloud, instead creating a small, dense, crunchy-and-chewy snack.

If you want to make your own half-popped kernels, start with your favorite popcorn kernels and a pot of water. Once the water is boiling, drop the kernels in for around 30 minutes.

The outer shells of the boiled kernels need to be dry before you start popping them. I just patted them down with a paper towel, but my editor Paul recommends drying them thoroughly in a low oven first.

The actual popping comes next. I popped them in all of the regular ways: with an air popper, in the microwave and in oil on the stove. I just turned up the heat and waited until the kernels stopped popping, except for the stovetop popcorn. I turned the stove off when oil started shooting everywhere because I used the wrong pan.

The microwave only popped half of the kernels, creating small, puffy egg-shaped popcorn-tasting pieces, probably closer to three-quarters-popped than half-popped. The air-popped kernels had the right shape, but tasted bland and had a rubbery consistency. The stovetop oil-popped kernels were crunchy and tasted almost identical to the Halfpops we got in the office.

Aside from taking around an hour and almost burning my house down, I was satisfied with the stovetop half-popped results. But I was more satisfied when I came into work today and got to eat a bag of the professionally made cheese-dusted ones.