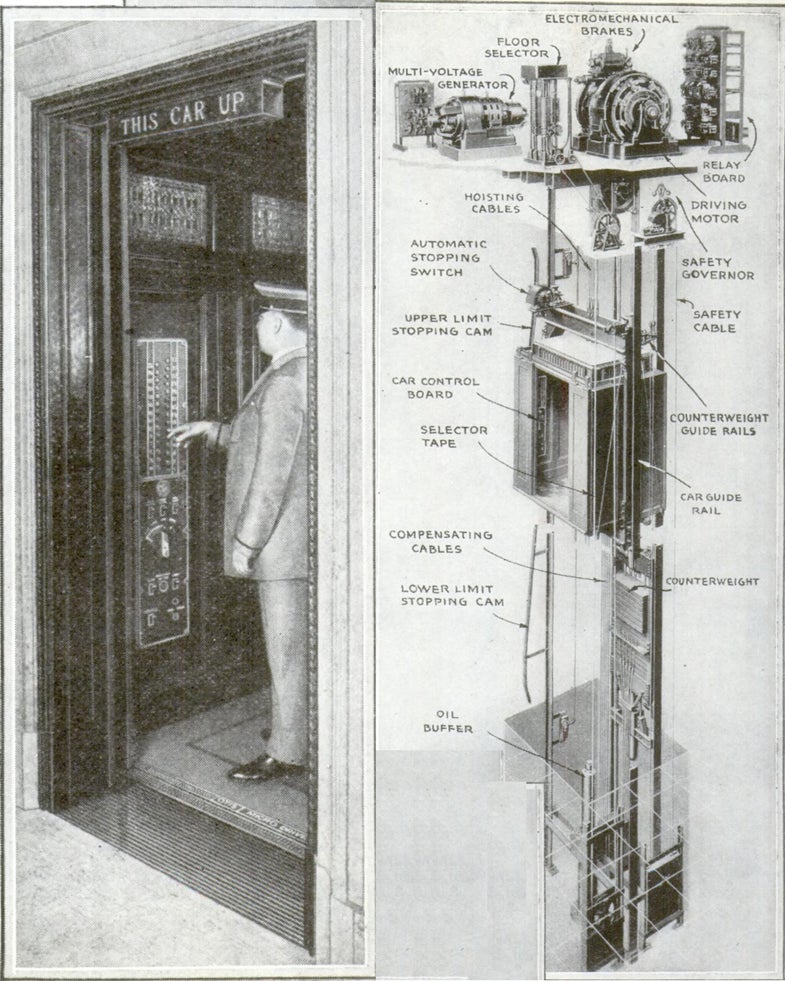 When in a few weeks the doors of New York City’s Empire State Building are opened to admit the public, fifty-eight electrical robots will be standing at attention, awaiting merely the pushing of buttons to begin the distribution of a daily population almost equal to the combined population of the famous summer resorts Newport, R. I., and Atlantic City, N. J.

Governed by complex electrical brains, through miles of copper-wire nerves, this fleet of automatic elevators is expected to handle an unprecedented traffic with a smoothness, swiftness, and safety that could not be approached under ordinary human control.

No railroad has required more careful planning than this greatest of vertical transportation systems. The offices on the eighty-six floors were designed to accommodate some 25,000 workers. If statistics of other large office buildings could be relied upon, about 60,000 transients, in addition, could be expected every day.

Not only would it be necessary to transport this army of 85,000 persons to the desired parts of the building and down again, but all the floors would have to be served with nearly equal speed and comfort. If the value of office space is not to decrease with height, the eightieth floor will have to be as easily accessible as the tenth or the twentieth.

Besides, there loomed the highly concentrated traffic of rush hours. Figures gave evidence that in the minutes between 5 and 5:30 p.m., for instance, about 15,000 persons would have to be brought to the ground floor.

Engineers and architects worked together over the problem, leaving no detail out of consideration. It was finally decided that fifty-eight elevators with automatic starting, stopping, level- ing, and door opening and closing devices could most efficiently handle the bulk of the work. Nine additional elevators, with various degrees of self-operation, were decided upon for use in the top seven stories, the tower, and for freight service. The entire elevator installation, including such related work as the preparation of hatchways, cost about $4,000,000.

The job of the construction gangs, electricians, and engineers in their many months’ work on this contract has not been simple. As the steelwork of the building rose higher and higher, the elevator men had to maintain satisfactory elevator service; steel-workers, masons, plasterers, plumbers had to be supplied continuously with materials. A delay of minutes would have cost hundreds of dollars. Every few days the machines for these temporary elevators had to be raised. To save expense, several elevators that had been salvaged from the old Waldorf-Astoria Hotel were drafted for temporary service.

For the permanent elevator installation, a number of innovations were necessary. Because eleven of the cars were to rise higher than any previously installed, larger hoisting motors had to be designed and built. Ordinarily plumb lines are sufficiently accurate to align the rails that guide the cars and counterweights.

However, fearing that air currents might deflect the lines in some of the tremendous shafts of the Empire State Building, the rails were aligned by sighting thiough mine transits—surveyors’ instruments adapted by mining engineers for determining the straightness of mine shafts.

A larger construction crew was required than on probably any earlier installation. Through one period over 300 elevator men were working simultaneously.

For many years the Otis Elevator Company, which has the contract for the present installation, has been developing what it calls “signal-control” elevators. These machines were originally developed for slow-speed, operator-less, foolproof service in apartment houses. When tall buildings made high-speed elevator operation essential, the necessity for automatic control became clear at once and development took a new direction. The first signal-control elevators in New York City were installed in the Standard Oil Building, about six years ago. Since that time many improvements have been made. The installation in use in the Chrysler Building, and the still greater one soon to be in operation in the Empire State Building, represent the most advanced systems of vertical transportation in the world.

We can best get an idea of automatic elevator magic by taking an imaginary ride. For an example let us enter the Empire State Building with the purpose of ascending to the seventy-ninth floor, seven stories below the top. We do not have to search long among the elevator corridors for the correct bank, which is indicated by an electric sign that announces: 66th to 80th floors.

A light above one of the cars indicates that this car is the next one to leave. We step in. In a jiffy a jewel flashes on the attendant’s control panel. He gives a slight throw to a lever. The doors of the shaftway and of the car silently and swiftly close, and the car automatically begins its smooth and fast leap skyward.

“Sixty-eight,” “seventy,” “seventy-nine,” the passengers announce their floors to the attendant, who merely presses a button on the control panel for each number called. He need worry no more. Once the doors are closed the car is under the care of invisible supervisors—cams, cables, governors, generators, motors, brakes, switches, rheostats, relays that are quicker, more sensitive, and more positive in action, than he.

The car continues to speed upward for about a minute (this time will later be cut almost in half), then suddenly numbers begin to flash on a panel above the door. 66, 67. Almost imperceptibly, the speed of the car is retarded.

As 68 flashes, it stops, the doors automatically glide open, and we discover that the car has leveled itself perfectly with the landing. There has been no under- or overshooting of the mark, no breath-taking acceleration or retardation, no wrestling with the doors. A gang of electromechanical geniuses, hidden about the car, in the shaftway, and in the motor room, have done away with all that.

After two of the passengers have stepped out, the attendant again gives a slight throw to the lever, which initiates the closing of the doors, and the car proceeds. For every button that has been pressed, the elevator automatically makes the same sort of gentle, swift, and accurate stop. Not only does it stop in response to buttons on the operator’s panel, but to buttons pressed by passengers waiting at hall landings. In which case the stop is made entirely without the attendant’s knowledge.

To economize to the utmost in waiting time, only the car that will actually stop to take on a passenger will flash a light in the hall. Ordinarily, the first car traveling past the landing in the direction desired must automatically stop; but when a car is full, the attendant, by throwing a switch on his control board, may relay all calls to the next available car.

When we have finally been let out at the seventy-ninth floor, we find ourselves turning over in our minds some possible explanations for what we have experienced. Without human intervention we have been whisked some 940 feet from the ground—about seven stories higher than the McAlpin, Biltmore, and Pennsylvania Hotels piled on top of each other—lights have flashed, the car has stopped at desired floors, and doors have opened. How silly seem the tin-clad dummies of the scientific lecture, that wink their eyes, salute, and say “hello,” compared to the practical everyday elevator Robot.

The controlling and operating equipment is by no means simple. To interconnect all the electrical circuits required by the elevators in this one building, nearly 8,000,000 feet of rubber-covered wire were necessary—more than enough to reach from Boston to Kansas City. In addition there are thirty-six miles of conduit. The length of the hoisting ropes, compensating ropes, and governor ropes exceeds 120 miles.

Accelerating, slowing down, leveling, and stopping of a car is accomplished chiefly through the assistance of what is known as a “selector.” This device, located in the motor room directly above each shaftway, has a sliding member that is run up and down past groups of contacts—in a small way following exactly the position of the elevator in the shaft—by a steel tape attached to the car.

If, by the pressing of a stopping button, the contacts of a certain group are made active, when the sliding member of the selector touches that group the circuits will be automatically manipulated to properly level and stop the car. The doors, which are opened and closed by an electric motor, are actuated simultaneously.

Not only was it necessary to provide electrical and mechanical devices to attend to the normal operation of the elevators, but devices to attend also to their safety. So much attention has been given to the question of safety that the chances of meeting with an accident in an elevator in this new installation are four or five times smaller than the chances of an accident in your automobile.

“What if a cable should break?” someone asks. The answer may be surprising. The safety of the car would not be interfered with. The cables are frequently inspected, and there are six cables to support each car, though the cars in the two highest banks of the Empire State Building have eight cables. Should flaws pass undetected, and one, two, three, four, or even five cables break, the car would not drop, as one cable is sufficient to carry the whole load! Of course an attendant will not continue to run a car with even one cable broken. The passengers would be left off at the nearest landing, and the elevator would not be put into service again until the cable had been replaced.

The present law in New York City limits the speed of elevators to 700 feet a minute. Certain that this law will soon be changed, eighteen of the Empire State elevators are arranged for a future speed of 800 feet a minute, eighteen for 1,000 feet, and eighteen more for 1,200 feet. The latter are the fastest passenger elevators ever made.

According to Otis engineers, the speed limit with modern equipment is not determined by factors of safety but by the normal distance between stops. In a department store, where stops must be made at every floor, 500 feet a minute would be more sensible than 1,200; but where a clear jump of nearly 800 feet must be made the lower speed is ridiculous.

That the traffic may be handled with the greatest expediency, an indicating panel and a dispatching panel are adjacent to each bank of cars. On one, lights show at a glance the position of every elevator in the bank; two columns of lights of a different color indicate the floors at which buttons have been pushed by waiting passengers. On the other panel are telephone, switches, and the control of an automatic dispatching device.

Ordinarily this device signals the attendant of a car when his car is the next to leave, then gives him another signal at the precise moment he should initiate the closing of the doors. Its operation may be speeded or retarded to suit the traffic, at the will of the dispatcher, or the dispatcher may start or recall cars independent of the device, by manipulating the switches.

Each elevator has a telephone, interconnected through an automatic 200-station switchboard with each other, with the starter, the engineer, the superintendent, and with a station on each floor.

The highest rise of any of the cars is made by Freight Elevator No. 1, which travels from the sub-basement to the eightieth floor, 986 feet. None of the cars that ascend from the lobby go higher. Two local cars provide service between the seventy-ninth and the eighty-sixth floors. It is planned to have another elevator in the mooring mast, rising to an observation platform 1,210 feet above the ground.