Testing The Best: A Weekend With Mobilegs Crutches 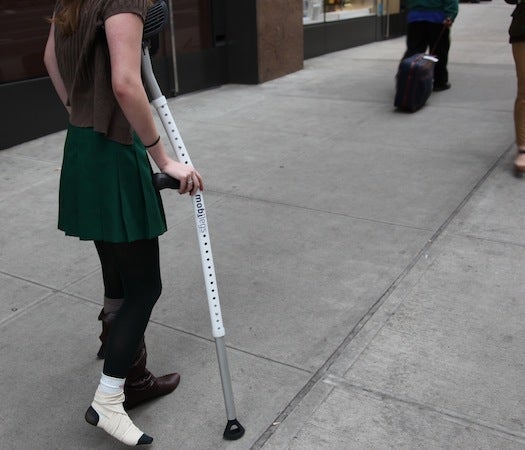 When I came into the office hobbling like Igor last week, thanks to a Muay Thai-related sprained ankle, any regular boss would’ve just offered a “get well soon.” Instead, my boss tells me we have some high-tech, ergonomically designed crutches left from Best of What’s New, and won’t I please take them for the holiday weekend? Sometimes it’s good to work at PopSci.

And so the Mobilegs, which became known to my family as my “space crutches,” carried me across the country, through the six different airports it took to get to Indiana and back. As the South Bend airport TSA employee so succinctly put it as she pulled them out of the X-ray machine, “these sure are different, aren’t they?”

Once I figured out how to hold the damn things (which takes a minute), there was no going back. The spring-loaded, flexible armrests never dug into my arms, even when they were supporting both me and my luggage. The ergonomic handles, while allowing my hands a comfortable grip, were incidentally also perfect for supporting a dangling duffel bag. They have a sneaker-esque tread on the bottom, for which I was particularly thankful as I clumped across the Cleveland tarmac in the pouring rain to climb the stairs to my plane. They’re also light enough to toss into an overhead bin with minimal difficulty.

The only drawbacks I experienced were some slight wear and tear on the bottom treads, and a squeakiness of the right armrest which made me sound a bit like a chew toy while walking around. The wear and tear is a bit troublesome–after only a few days of heavy use, the rubber treads started to come off in little bits, a problem more traditional crutches don’t really have.

The Mobilegs are so comfortable that I actually continued using them for a couple days after I really needed to, just because it was preferable to limping. When I saw people on the street using normal crutches, I pitied them. And now, one week later, I’m almost completely healed, and plan on going back to Muay Thai today–which probably wouldn’t have happened if I had continued dragging my foot around like dead weight all weekend. So thanks, space crutches. I’ll kick some ass for you.