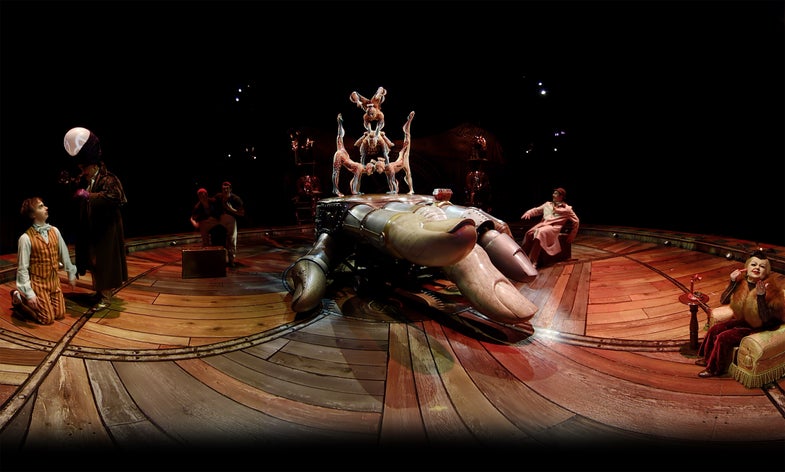 The new Cirque du Soleil virtual reality experience will let audience members feel like they are a part of the show. André Lauzon
SHARE

When you think of Cirque du Soleil, the words that most likely come to mind are “theatrics,” “acrobatics” and “prolific.” Since its founding in 1984, the Montreal, Canada-based company has produced 37 shows and employs nearly 4,000 people across the world. What you may not realize is that the words “technology leader” belong on that list, too. The latest foray of the entertainment company: virtual reality.

I recently had the honor of hosting a conversation on stage during the Web Summit conference in Dublin, Ireland with Jacques Méthé, president of Cirque du Soleil Media. He filled me in on the latest developments, and gave me a glimpse of what’s in store for the international brand when it comes to technology.

To the outside world, I’m certain I looked like an idiot as I spun around wearing the Samsung Gear Virtual Reality device and helmet on my head, watching “KURIOS: Cabinet of Curiosities.” But it was worth it. I was completely engulfed in the technology.

Thanks to virtual reality, I was actually a part of that show. I saw acrobats dancing around me. A little lady sat on the ground nearby, uttering things in a munchkin-like voice. I turned around to see a magician creeping up behind, too close for comfort. It was by far the most immersive—and intimate—technology I’ve ever been a part of. Méthé says that’s exactly what Cirque du Soleil was going for. 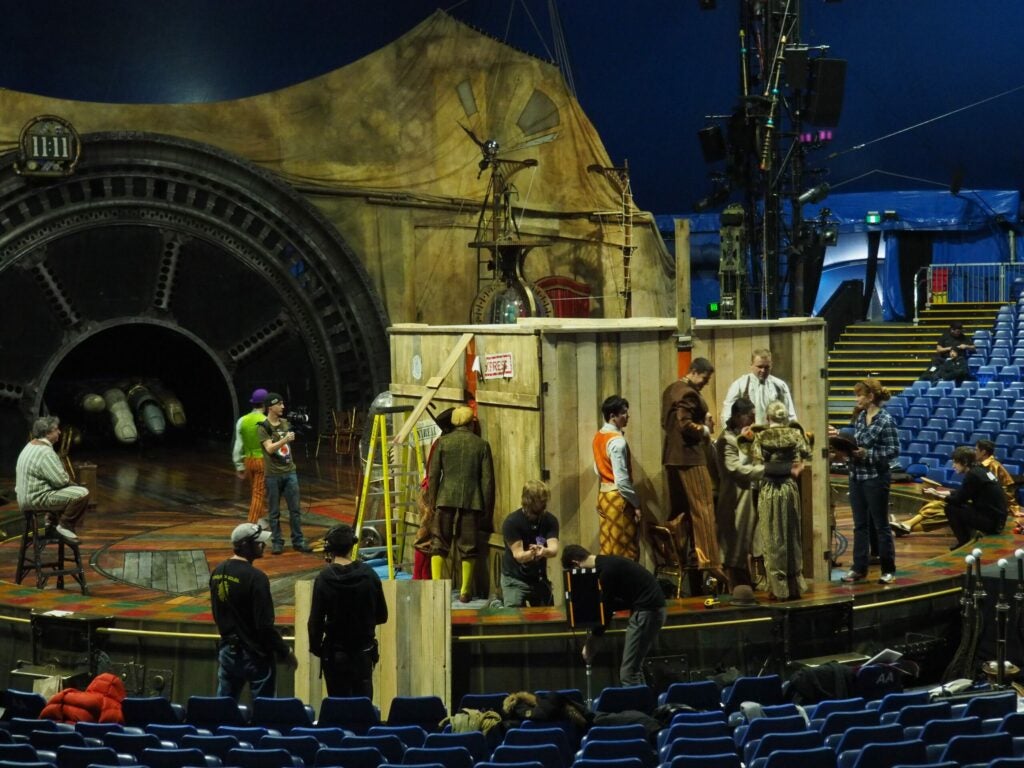 Behind the Scenes at Cirque du Soleil

For the first time, audiences will be able to experience what it’s like to be part of a Cirque du Soleil show, thanks to virtual reality.

“The purpose here is not to show you a show, but to put you on stage with the artists and making this whole performance for you,” says Méthé.

In doing so, Cirque du Soleil is first out of the gate to bring together a live production and virtual reality.

“We wanted to be the first because it’s always important to be with the first wave,” says Méthé. “Cirque is a first wave kind of company.”

The plot of “KURIO” revolves around an inventor’s curio cabinet. It’s loaded with “curiosities”—including, well, me, thanks to virtual reality. All of the characters lurk around me, investigating my presence. “You are one of these curiosities and you join this bunch of really curious people,” says Méthé.

Virtual reality is, hands down, the big buzzword for 2015/2016. But the perennial question, when it comes to tech, is this: will it be consumer friendly and enough of a household name that people will actually buy it? Or will it become the next 3D TV? How do we not screw this up for the consumer? 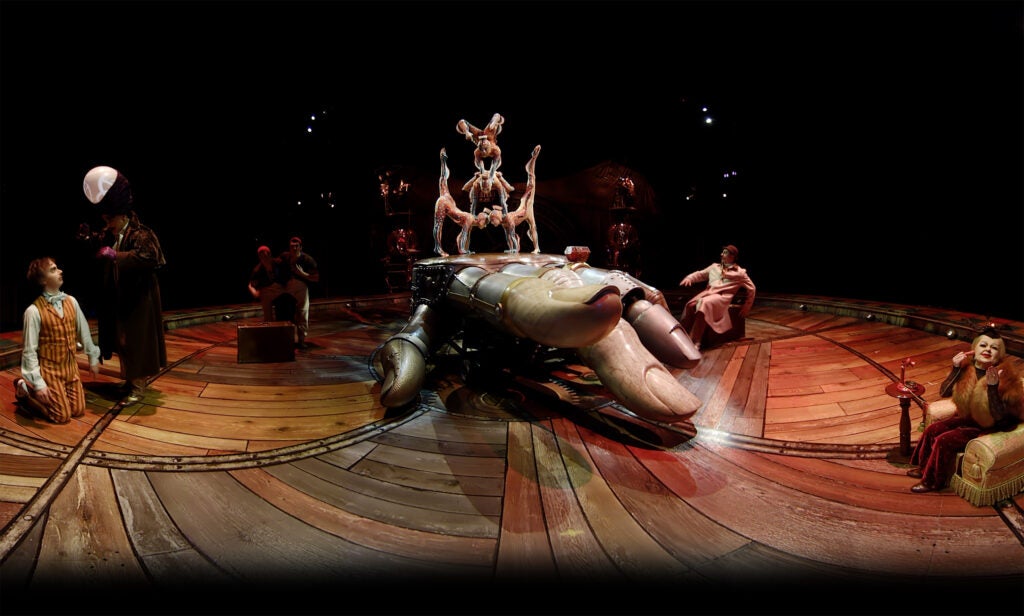 Behind the scenes at Cirque du Soleil

The new Cirque du Soleil virtual reality experience will let audience members feel like they are a part of the show.

Méthé says that because the technology is so young, his team approached it with caution. Rather than investing huge amounts of capital upfront, Cirque du Soleil partnered with Samsung, creator of the virtual reality device, and Felix & Paul Studios in Montreal, which created the special camera used for recording the experience, and approached the endeavor as a team.

The goal, in bringing virtual reality to the production, was to make available at least two angles at all times, says Méthé. “Why would you show things only in front of you when the device can show you all around you, and on top of you and almost below you?” he asks. The camera has many lenses and microphones, and allows for 360-degrees of views and immersive sounds.

Because of that, the recording process is relatively straightforward. It’s the post-production aspect—allowing for multiple angles as the viewer spins around—that’s complicated.

“The hardest part here is post production, because you need to put all of these images together into something that is completely seamless and stereoscopic,” says Méthé.

When asked about the future of virtual reality, Méthé admits that he doesn’t have a crystal ball (although many of the Cirque du Soleil shows do). But he envisions an exciting future for the technology—on the stage, as well as in the world at large. He predicts that, as with all technology, prices in virtual reality will come down and it will, in time, connect people across the world in a manner that’s much more intimate than a flat computer screen. If it takes off, virtual reality could be used to connect patients and doctors; it could deliver entertainment to people who live far away or can’t afford it; it could allow for a fun escape for sick kids and the list goes on. 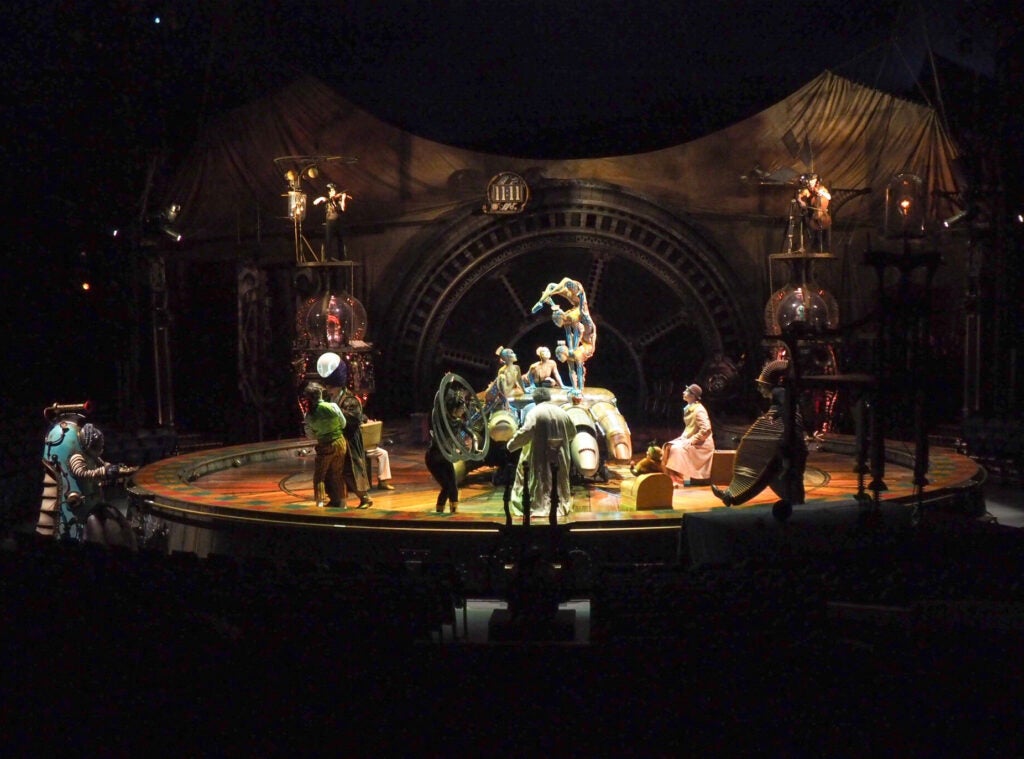 Behind the Scenes at Cirque du Soleil

Virtual reality isn’t the only tech that Cirque du Soleil has in the works. Méthé says that the entertainment company is using an increasing amount of digital technology in the shows, themselves, including its latest show, “Toruk the First Flight,” inspired by James Cameron’s Avatar (the live arena tour begins this month). He says Cirque du Soleil is also working on projects that will appeal to a younger audience, including an animated series for kids that will debut on Netflix in 2016.

“We’re just at the beginning of exploring new ways to tell our stories,” says Méthé.

You can catch the full audio of the conversation with Jacques Méthé, and more, on Katie Linendoll’s podcast, at http://www.Katie.show/