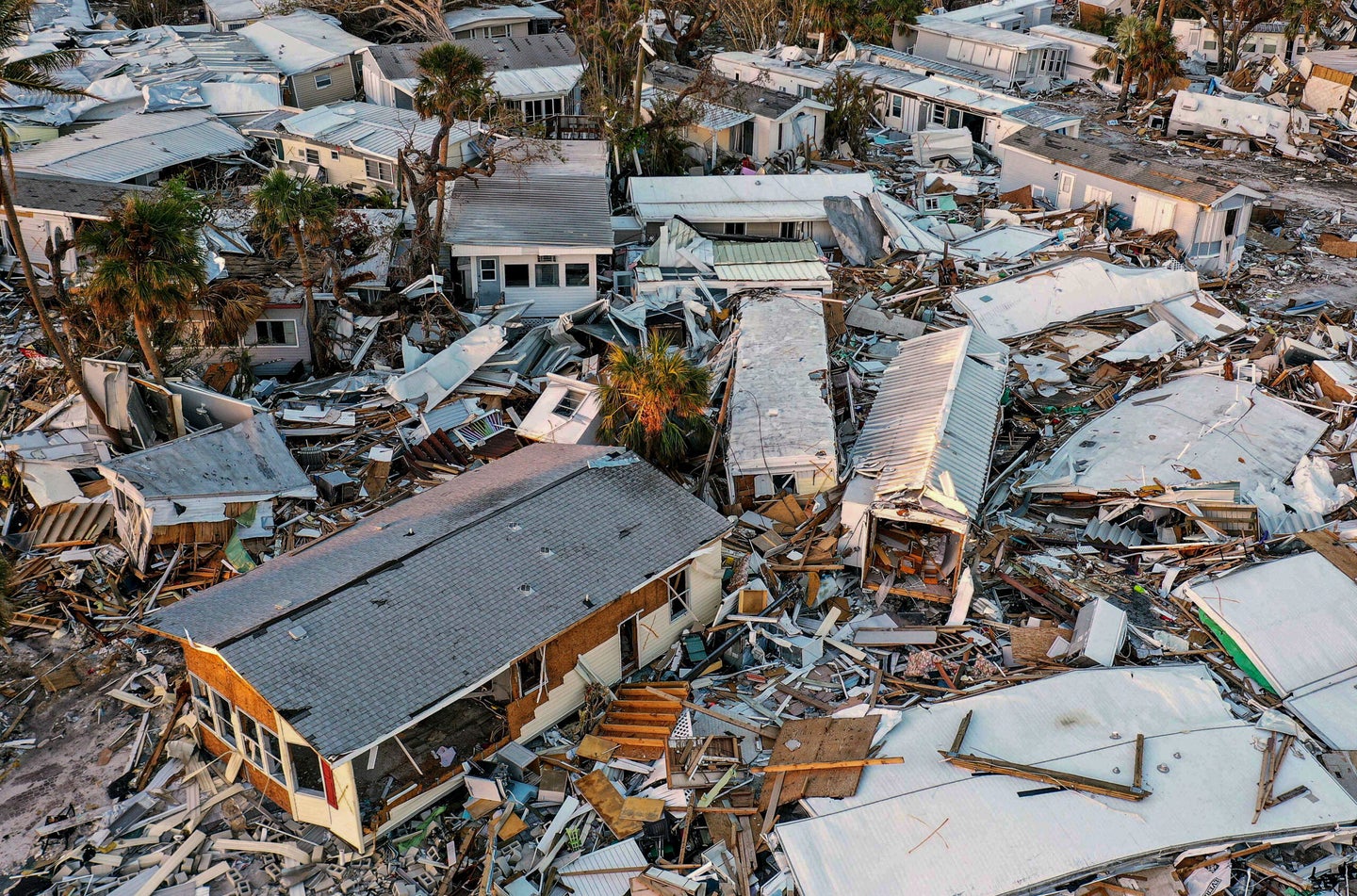 This article was originally featured on KHN.

All kinds of natural disasters—hurricanes, tornadoes, floods, wildfires, dangerous heat waves—pose substantial risks to older adults. Yet, not enough seniors prepare for these events in advance, and efforts to encourage them to do so have been largely unsuccessful.

The most recent horrific example was Hurricane Ian, the massive storm that in September smashed into Florida’s southwestern coast—a haven for retirees—with winds up to 150 mph and storm surges exceeding 12 feet in some areas. At least 120 people died, most of them in Florida. Of those who perished, two-thirds were 60 or older. Many reportedly drowned and were found in their homes.

Why didn’t more older adults leave for safer areas, as authorities recommended? Understanding this is critically important as the population of older people expands and natural disasters become more frequent and intense with climate change.

“I think the story of Hurricane Ian that people will remember is the story of people who didn’t evacuate,” said Jeff Johnson, AARP’s Florida state director.

Even before the storm, there were worrisome signs that disaster preparedness was lagging. In an AARP survey this summer of 1,005 Florida residents 45 and older, 67% reported having a natural disaster emergency plan, compared with 75% in 2019. The declines were most notable among people with low incomes (less than $50,000 a year) and those who owned their homes.

Meanwhile, 61% of Florida residents 45 and older said they planned to shelter in place during the next bad storm. In 2019, the comparable figure was 55%.

Johnson said concerns about the covid-19 pandemic and inflation’s impact on budgets may have contributed to “a lot of people who were just not mentally prepared to leave.” More broadly, he faulted disaster preparation checklists that target seniors.

Mostly, these resources tell older adults to complete a long list of tasks before a crisis occurs. “Coming out of Ian, what’s become clear is that giving seniors materials with lots of steps they need to follow ends up being overwhelming,” Johnson told me. “The checklists aren’t working.”

Among the items that seniors are advised to assemble: enough nonperishable food, water, and medications for several days; cash for 30 days of living expenses; hearing aids and glasses; flashlights and battery-powered lamps; extra batteries; and first-aid supplies.

Beyond that, older adults are encouraged to create a list of people who can help them in an emergency, familiarize themselves with evacuation routes, arrange for transportation, and compile essential documents such as wills, powers of attorney, and lists of their medical providers and medications.

Doing all this is especially challenging for older adults with hearing and vision impairments, cognitive problems, difficulties with mobility, and serious chronic illnesses such as heart disease or diabetes.

Also at heightened risk are seniors without cars, cellphones that broadcast emergency alerts, extra money for lodging, or family members and friends who can help them get organized or take them in, if necessary, according to Lori Peek, director of the Natural Hazards Center and a professor of sociology at the University of Colorado-Boulder.

“It’s not age alone that renders elderly people vulnerable in disasters,” she noted. “It’s the intersection of age with other social forces” that affects people who are poor and represent racial and ethnic minorities.

This lesson has been painfully learned during the covid pandemic, which has killed enormous numbers of vulnerable seniors. But it hasn’t been incorporated into disaster preparedness and response yet.

Sue Anne Bell, an assistant professor at the University of Michigan, who studies the health effects of disasters, said this must change. “We need to focus disaster preparedness on these vulnerable populations,” she said, adding that a one-size-fits-all approach won’t work and that outreach to vulnerable seniors needs to be tailored to their particular circumstances.

Coming up with better strategies to boost older adults’ ability to cope with disasters should be a national priority, not one specific to areas beset by hurricanes, because lack of preparedness is widespread.

In May 2019, Bell’s colleagues at the University of Michigan’s National Poll on Healthy Aging surveyed 2,256 adults ages 50 to 80 about emergency planning for natural or man-made disasters. Although nearly 3 in 4 respondents said they had experienced an event of this kind, just over half had a week’s supply of food and water available, and only 40% said they had talked to family or friends about how they would evacuate if necessary.

Least likely to have prepared for emergencies were seniors who live alone, a growing portion of the older population.

Of enormous concern are older adults with Alzheimer’s disease or other types of cognitive impairment living in their own homes, a larger group than those living in institutions.

When Lindsay Peterson, a research assistant professor at the University of South Florida, interviewed 52 family caregivers in 2021 and 2022, all of them said they would never take a loved one with dementia to a disaster shelter. Although Florida has created “special needs” shelters for people with disabilities or medical concerns, they’re noisy and chaotic and lack privacy.

Even older adults without dementia are loath to go to shelters because of these issues and because they don’t want to identify themselves as needing assistance, Peek noted.

Using feedback from her research, Peterson this year created a disaster preparedness guide for dementia caregivers in concert with the Alzheimer’s Association that presents information in an easy-to-understand format.

“A lot of caregivers told us, ‘Please help us do this but make it simpler. Every day I wake up and there’s a new crisis,’” Peterson said.

She noted that institutions such as nursing homes have been a focus of disaster planning for older adults in the wake of disasters such as Hurricane Katrina in New Orleans in 2005 and Superstorm Sandy, which hit the New York City metro area and New Jersey especially hard in 2012.

Now, the field needs to do more to address the needs of the vast majority of older adults who live at home, Peterson suggested.

What might that include? A report published by the Federal Emergency Management Agency and AARP in July calls for bringing together organizations that serve older adults and local, state, and federal agencies responsible for emergency preparedness on a regular basis. Together, they could plan for reducing the impact of disasters on seniors.

Separately, a January 2020 report by the American Red Cross and the American Academy of Nursing recommends that home health agencies and other organizations serving older adults at home develop plans for helping clients through disasters. And more opportunities for older adults to participate in community-based disaster training should be made available.

Think of this as age-friendly disaster planning. Until now, the focus has been on individuals taking responsibility for themselves. This is a more communal approach, focused on building a stronger network of community support for older adults in times of crisis.

“All of us are thinking now that communities can’t be age-friendly or dementia-friendly if they’re not disaster-resilient,” said Johnson of AARP Florida. “And everyone who’s been through Ian, I suspect, will be more vigilant going forward, because people have been scared straight.”