The massive lake system is full of ships taken down in seasonal storms, now preserved by cold fresh water. 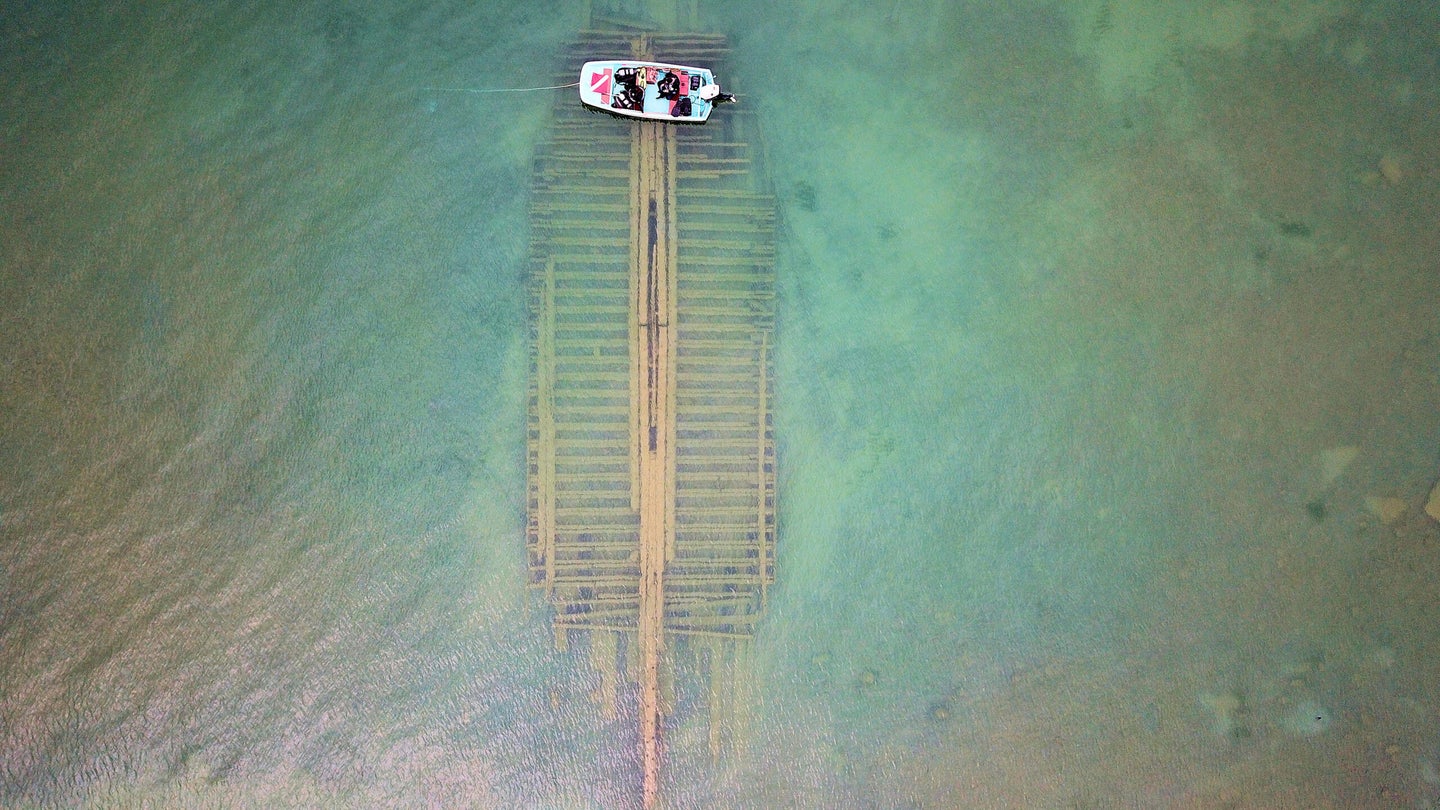 Snow and waves sprayed the famous Edmund Fitzgerald on November 10, 1975, as the ship traversed through a violent fall storm over Lake Superior. The ship, which had set out the day before to bring iron taconite pellets from Superior, Wisconsin, to Detroit, Michigan, suffered a few damages to its structure around 3:30 pm, and was sunk during the dangerous weather later that evening. The 729 foot ship went down into the waters of the lake, taking all 29 crew members with it.

Folk singer Gordon Lightfoot’s famous song, “The Wreck of the Edmund Fitzgerald,” commemorates the sinking of this ship, the largest to traverse the Great Lakes at the time. Other wrecks have inspired folks songs, too, like the “Lady Elgin” and “The Eastland,” saluting the voracious storms and currents of these lakes.

[Related: X-rays are revealing new clues about a shipwreck from 1545]

The ferocity of the Great Lakes waters have taken down thousands of other boats, with the cold, fresh water preserving their remains, and even holding onto the passengers as the frigid water temperatures keep bodies from floating up after decomposition begins. Some of these wreck remains make for popular diving sites, while others remain undiscovered in the deep waters. Although these waters remain violent come storm season, safety requirements and tech advancements have helped prevent more wrecks from happening in recent years.

The “gales of November” are not just a lyric in Lightfoot’s song. They’re a yearly, dangerous weather pattern that rocks the shores of the Great Lakes, causing massive storms with up to 50-mile-an-hour winds and100-mile-an-hour gusts. They’ve resulted in wave heights of just under 30 feet on Lake Superiort, and rumored wave heights of above 40 feet.

The cause of these massive storms are air systems from across the globe that mix over the Great Lakes, making for a hectic battleground of air pressure. Moist, warm cells originate in the Gulf of Mexico and make their way north, while cold Arctic systems strengthen and make their way south and east towards the lakes. The two meet over waters of the Great Lakes in the fall, which have spent the summer basking in the sun. The different air pressures then battle over the relatively warm water, which can intensify the storms they create even more.

In 1903, a bulletin published by the Weather Bureau, the name of the National Weather Service at the time, outlined over 230 major storms in the Great Lakes region from the past 25 year prior. Of the list of storms, 45 of them happened in November, more than any other month of the year. Even over a century ago, the Great Lakes were known for their massive fall storms.

In the case of the Edmund Fitzgerald, recorded wind gusts reached 75 knots, or over 85 miles an hour, the night of its fateful sinking. A low-pressure storm system came northeast until it hit the Great Lakes, intensifying as it moved over the waters. According to transcripts from that night, the final communication from the Fitzgerald was from its captain saying “we are holding our own.” The ship is believed to have sunk shortly after, very suddenly. Radio transmissions between the S.S. Arthur M. Anderson, the ship that ended up leading the search for the Fitzgerald, and the Coast Guard that evening painted a portrait of the concern for the Fitzgerald lost in the dangerous weather.

The sinking of ships like the Fitgerald are eternalized in songs that remind of the perilous nature of the lakes, and how quickly the waters can change. These folk ballads safeguard the tales of these wrecks in the Midwest.

“As you explore these songs and find out more about them, a lot of them do preserve a lot of accurate detail. That was sort of the goal of it. It was a way to communicate,” says Misty Jackson, Great Lakes and Midwest archaeology specialist at Arbre Croche Cultural Resources LLC, “to preserve the memory of these things at the time when they came out.”

The fall weather conditions took down so many ships, whether they were remembered in song or not, combined with the rush for merchants to get as many boats out of port to reserve goods before winter takes hold. But massive amounts of ships across the Great Lakes have gone down at all times of year. In one of the deadliest patches of the Eastern Seaboard, called the Graveyard of the Atlantic, it’s estimated that around 5,000 ships have gone down in recorded history. Roughly 6,000 ships have gone down in recorded history the Great Lakes. Now, these wrecks lie under cold, fresh water.

While the surface of the lakes can create a perfect scenario for taking a ship down, the waters underneath have the best conditions for keeping them intact. Boats that go down in the Great Lakes benefit from the temperatures at certain depths, according to Kevin Ailes, shipwreck preservationist and diver. The cool temperatures, reaching near freezing below 100 feet deep and further, mostly keep the ship’s wood from rotting.

Divers like Ailes have the luxury of being able to relatively easily reach many of these ships, as so many shipwrecks have happened close to shore. Ailes explains that these wrecks are more accessible, better preserved, and less looted than East Coast shipwrecks, because of the cold water temperatures, physical proximity, and general respect in the diving community. There is a “take pictures and leave only bubbles,” mindset, as Ailes describes it, for most divers.

While the ships are mostly safe from rot and human intervention, there are other concerns for these pieces of history. One of the latest problems for these ships are quagga mussels, an invasive freshwater mussel native to Ukraine that latches onto the wood of these shipwrecks.

“When they do break off, because they have tendrils that have gone into the wood, they do take some of the wood along with them.” Ailes says. “They are eroding away at the shipwrecks.” The mussels over time cover details of boats on the lakebed, as well, reducing details that divers can see.

The quagga mussels bring a curious other element to the table, though. Ailes explains that because the bivalves are filter feeders, they have actually helped to clear particulate matter from the water. This has greatly increased the visibility for divers, and Ailes likens the clarity to that of salt water even at 50 or sometimes 100 feet below the surface.

Visibility can be greatly affected by algae blooms, however, which are becoming more of a concern as water temperatures even at the depths of the Great Lakes are increasing. Warmer temperatures may in turn bring about more algae blooms. Ailes also says that these blooms bring an increase of sediment and muck on the lake bottom, which may even bury some wreck remains.

Laws in place in the Great Lakes region help keep these historical pieces safe, and more protections continue to come for various areas in the Great Lakes, including the recently designated Wisconsin Shipwreck Coast National Marine Sanctuary. The National Oceanic and Atmospheric Administration designated the 962-square-mile section of Lake Michigan as protected in June, and it’s expected that dozens of shipwrecks will be imaged here using photogrammetry, a type of 3D modeling now within budget after the designation allowed access to federal funding.

“You do not have to have a permit just to dive and look and take pictures,” says Jackson, “or technically even to do any kind of survey that is non invasive.”

Non-invasive techniques that researchers use to record some of these shipwrecks, besides just photographing and filming them, also include side-scan sonar, which images wrecks that might lie particularly deep underwater. More invasive forms of studying wrecks, like removals of specific artifacts or entire boats, require a bit more planning. Permits are available for excavation, but Jackson explains that it can be extremely difficult and expensive to preserve wrecks once they are brought up.

“These vessels are far better preserved left underwater,” Jackson says. Because of this, most boats find their final resting place underwater.

Despite other massive, hurricane-strength storms continuing to occur over the last 25 years, the Great Lakes haven’t lost a commercial vessel since the wreck of the Fitzgerald. Advances in navigational technology, safety inspections by the Coast Guard, and cargo ship load limits have all helped to reduce the number of wrecks, among other factors. Other smaller vessels have been lost, but wrecks have decreased in number continuously since the 1950s. Of the boats lost between 1950 and 2000, only 6 percent were lost in the ’90s.

Traffic control systems in more congested areas also help keep boats safe, like the vessel traffic service in the Sioux Saint Marie area in Michigan. Coast Guard members monitor ships in this region, and can conduct their directions and operations if necessary.

“If there’s any need to do any vessel controls due to low visibility or fog, they’ll put those in place,” says Lorne Thomas, Chief of External Affairs for the Coast Guard’s 9th district, which covers the Great Lakes region. Coast guard members might, for example, limit or slow the entry of vessels in bad conditions.

Thomas explains there is no traffic management on the bulk of the Great Lakes outside of some of the choke points, but all vessels above 300 gross tons are required to have certified pilots on board. This requirement means at least one person on board has been certified by the Coast Guard in boat pilotage, and is the expert on navigation and traversing dangerous waters. Canadian ships take on a certified US pilot, where US vessel ships usually have a captain or other crew member certified themselves.

Besides having pilots for navigation, most boats these days rely on GPS for crossing the lakes—but navigation aids like lights and buoys help supplement their journeys. Gone are the days of relying on maps and lighthouses, and even just radar, as boats have many more options for navigation. Lighthouses even got a face lift to help keep those on the water safe.

“The old lighthouses with rotating lenses at the top have been pretty much replaced by much more modern beacons that may be on the property, but not necessarily at the top of the lighthouse anymore,” Thomas says.

All these contribute to increased safety on the waters of the Great Lakes, but new risks might be on the horizon. Climate change causes warming waters, and in some cases, rise of water levels in the lakes. The way these water temperatures and levels will affect navigation, weather patterns, and coastlines is unknown, but might be the next in line of challenges for the Coast Guard to face to keep vessels safe.

The Great Lakes are filled with history under their surface, and those traversing them can never control their turbulent nature. But as technology advances, more individuals can safely explore these unique waters and the graveyards they’ve created.