Male dolphins form alliances to help each other pick up mates

Outside of humans, Indo-Pacific bottlenose dolphins are the only species to have 'multi-level' alliances. 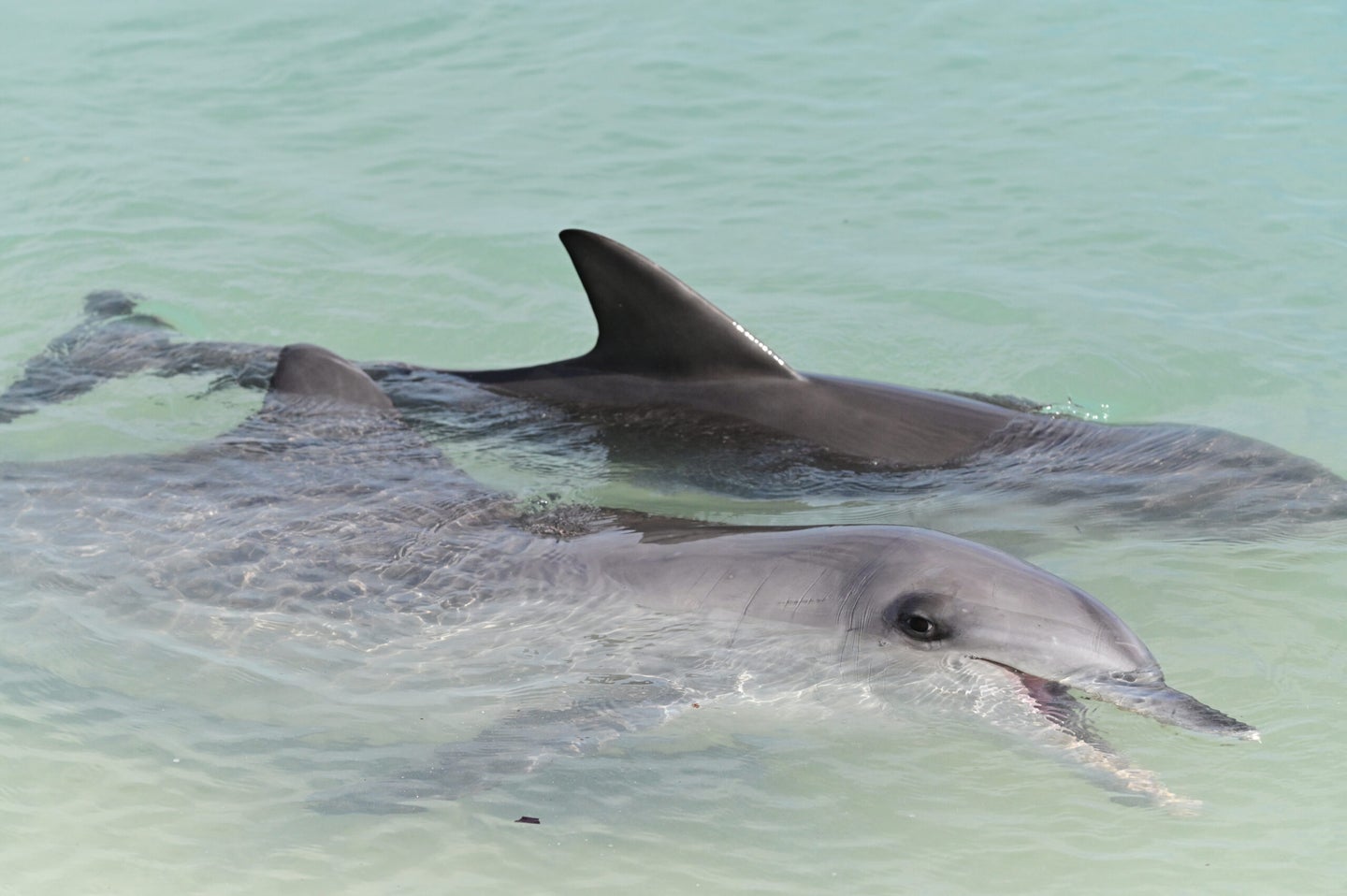 Dolphins have been capturing our imaginations for decades due to their acrobatics, jovial and charismatic looking faces, and intelligence. Now, researchers are gaining even more knowledge on their complex social networks.

A paper published yesterday in The Proceedings of the National Academy of Sciences (PNAS) claims that male bottlenose dolphins form the largest known multi-level alliance network outside humans. Humans form alliances for varying strategic reasons (economic, social, political, etc.) and dolphins appear to form similar complicated strategic relationships with each other. The international team of scientists say that these cooperative relationships between groups increase male access to a contested resource: female mates.

Researchers at the University of Bristol, University of Zurich, and University of Massachusetts looked at association and consortship (or, short-term mating relationships) data to model the structure of alliances between 121 adult male Indo-Pacific bottlenose dolphins at Shark Bay. The bay is a UNESCO world heritage site in the Gascoyne region in Western Australia and has a number of “exceptional natural features, including one of the largest and most diverse seagrass beds in the world,” according to UNESCO.

In the late 1980s, the team had previously discovered that adult male dolphins swam around in pairs and trios, cooperating to ‘herd’ the single females that were ready to conceive. They first witnessed two squads cooperate to attack another group of dolphins, showing that just like humans, dolphins have cliques within larger alliances.

“Cooperation between allies is widespread in human societies and one of the hallmarks of our success,” said co-lead author Stephanie King, associate professor of biological sciences at the University of Bristol, in a press release. “Our capacity to build strategic, cooperative relationships at multiple social levels, such as trade or military alliances both nationally and internationally, was once thought unique to our species. Not only have we shown that male bottlenose dolphins form the largest known multilevel alliance network outside humans, but that cooperative relationships between groups, rather than simply alliance size, allows males to spend more time with females, thereby increasing their reproductive success.”

Research published in 2021 showed that the male dolphins responded strongly to all of the allies that had consistently aided them in the past, even if they weren’t currently close buddies. Additionally, they didn’t respond strongly to males who hadn’t consistently helped in the past, even if they were currently friends. This demonstrates that these dolphins form social concepts of ‘team membership’, organizing allies according to a shared history of cooperation.

[Related: Five animals that can sense things you can’t.]

Intergroup cooperation in humans was thought to be unique and dependent upon the evolution of pair bonds and parental care by males. These are the two other features that distinguish humans from our common ancestor with chimpanzees. “Our results show that intergroup alliances can emerge without these features, from a social and mating system that is more chimpanzee like,” said co-lead author Richard Connor, professor emeritus at the University of Massachusetts who is now affiliated with Florida International University.

This research builds on exactly 40 years of studying the dolphins of Shark Bay and the 30th anniversary of the team publishing their discovery of two levels of male alliance formation.

“It is rare for non-primate research to be conducted from an anthropology department,” Michael Krützen, an author on the study and the Head of the Anthropology Institute at the University of Zurich, said in the release. “But our study shows that important insights about the evolution of characteristics previously thought to be uniquely human can be gained by examining other highly social, large-brained taxa”.