Dolphins Know Other Dolphins By Name Even After Decades Apart

Even humans have trouble remembering the names of people they met 20 years ago. But not dolphins! 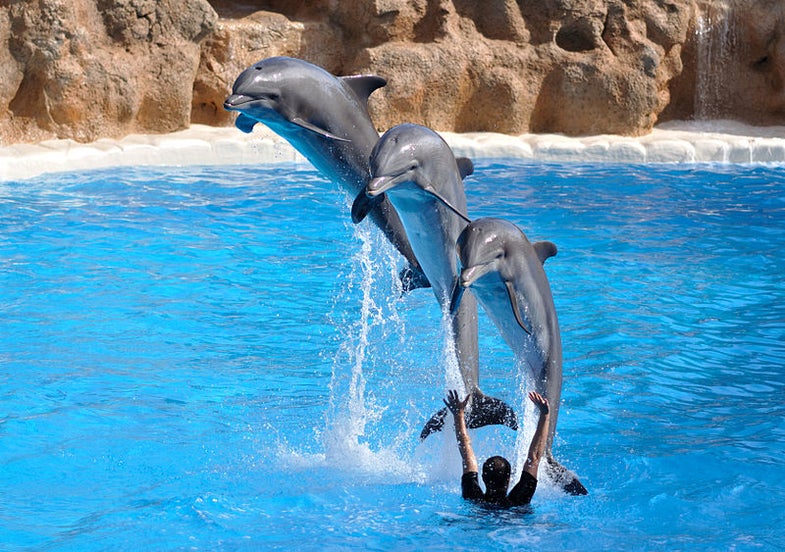 Last month, a study indicated that dolphins call each other by names, of a sort: they have a particular whistle unique to each dolphin, and when a dolphin hears its own whistle-name called, it responds. And now a study, published in the Proceedings of the Royal Society B, suggests that dolphins can remember the names of other dolphins for decades. That’d be useful if you want to grab an old buddy and go conching.

Jason Bruck, at the University of Chicago, tested 43 bottlenose dolphins of varying ages that have been shuffled around, tank to tank. The dolphins had all lived with each other at some point, but for different lengths of time; some had lived together for a few months, some for years. Some lived together at the time of testing, and some hadn’t seen each other for decades.

He recorded all of their individual whistle-names, as well as the whistle-names of a few dolphins that were unfamiliar to his test dolphins. Then he played these whistle-names through an underwater speaker to gauge their reaction. The dolphins responded very obviously to the whistle-names of past friends, approaching the speaker eagerly, hovering around it, sometimes even trying to whistle back at it. But for an unknown dolphin’s whistle-name, they showed far less interest.

The dolphins showed a pretty amazing length of memory; one remembered a tankmate from over 20 years prior. “This research shows,” he writes in the paper’s abstract, “that dolphins have the potential for lifelong memory for each other regardless of relatedness, sex or duration of association.” You can currently read the article for free over here.