World leaders promise to end deforestation. Is that even possible?

Protecting the world's forests is crucial for combating climate change, but agreeing on how to do so is tricky. 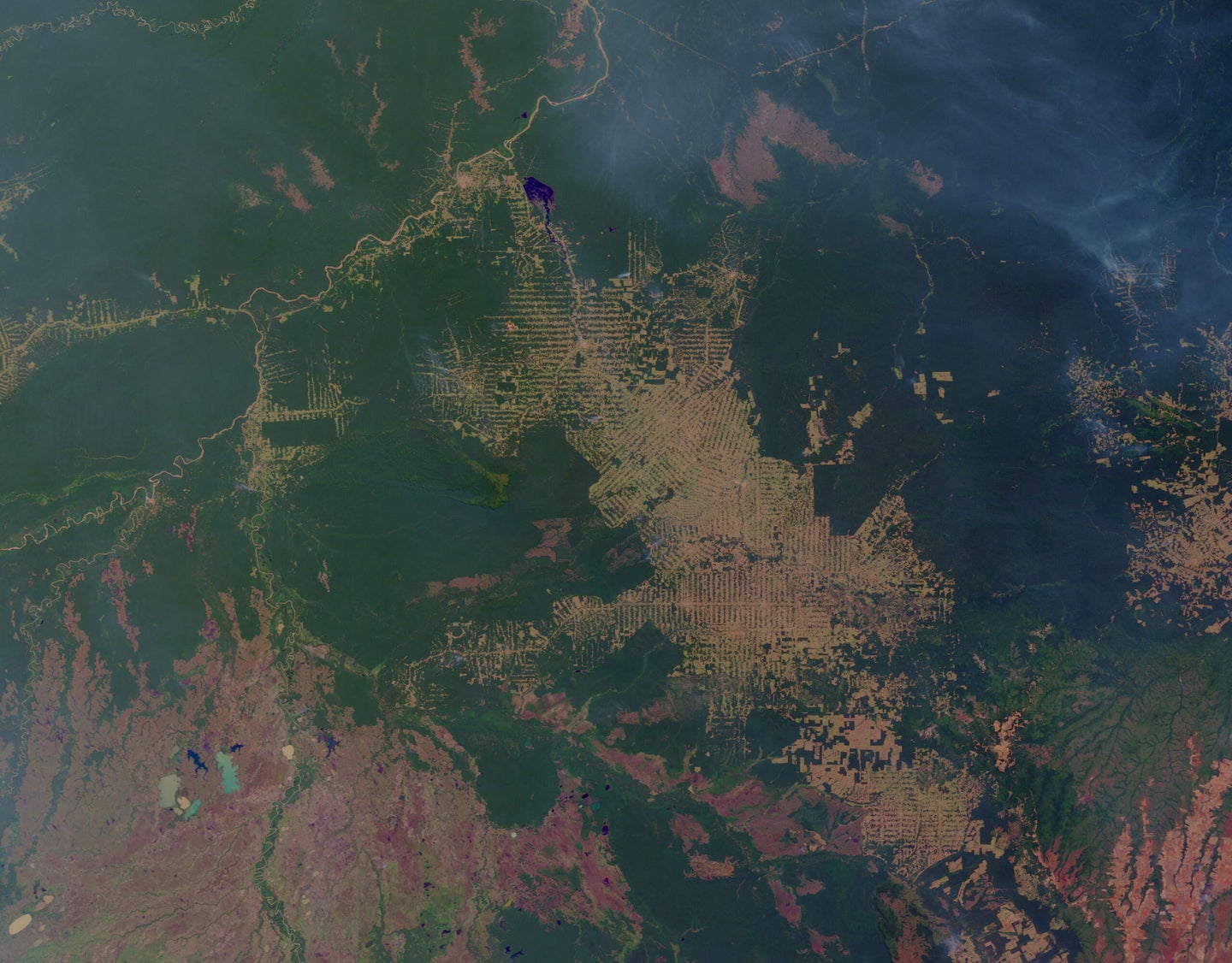 Farms and ranches spreading from roads in the state of Rondônia in the Brazilian Amazon. NASA Earth Observatory
SHARE

In the opening days of global climate change conference COP26, more than a hundred countries signed a declaration saying that they would reform land use, clean up agriculture, trade, and “reverse forest loss and degradation by 2030.” The countries, including the United States, Brazil, Indonesia, and the Democratic Republic of the Congo, contain 90 percent of the world’s forest cover, and the declaration came along with $20 billion worth of pledges from governments and private industries.

Deforestation leads to an enormous amount of carbon emissions. Lumber  rots, and the organic matter stored in the forest floor begins to break down. Stopping that process would reduce global emissions, and reforestation could begin to soak up atmospheric carbon. The IPCC estimates that better forest-management practices could reduce emissions by 14 gigatons of carbon a year in 2030—nearly twice the annual carbon emissions of the United States.

Given that decarbonizing the US economy is projected to cost trillions of dollars, a global commitment of $20 billion for forests doesn’t seem like a lot, says Jason Schatz, science lead at Descartes Labs, a company that builds deforestation models based on satellite data. “It’s awesome, that’s more than we’ve ever done before, but on the other hand, he says, “this is a huge opportunity sitting on the table and it’s getting so little.”

The declaration is a key part of keeping the world on track to avoid the worst of climate change. But whether countries will follow through on that need is another story.

After decades of protests from environmental activists, the US and Canada have both taken steps to slow logging of primary forest for paper and timber. A plan in the 1990s ended logging in some of the Pacific Northwest’s last remaining old-growth forests, while British Columbia passed a law meant to protect old-growth trees in 2020, though it has faced criticism for overemphasizing the plan’s benefits, while leaving many large trees available for logging.

In the tropics, forests are often cleared not just for wood, but to expand fields, plantations, and ranches. Meeting the commitment would likely mean reforming profitable commodity markets which buy from oil palm plantations in Southeast Asia, cacao farms in West Africa, and cattle and soy in Brazil.

There’s been progress on curbing forest-replacing industries before: a report on global forest health from the World Resources Institute found that over the past decade, Indonesia and Malaysia have managed to curb the conversion of tropical forest into palm plantations. That’s particularly significant for Indonesia, a historical center of rainforest destruction that has lost the equivalent of one Texas’ worth of forests over the last 50 years. The authors chalk the success in Indonesia up to a pause in plantation licenses and a permanent ban on forest clearing.

Even in the absence of specific government deforestation policies, private companies have played a role in previous successes. In the early 2000s, several massive companies pledged to stop buying soy from deforested plots of land in the Amazon. Recent research in Nature showed the plan reduced deforestation by thousands of square miles.

“The soy moratorium is an absolute success story,” says Holly Gibbs, a geographer at the University of Wisconsin and the senior author of the Nature study. “These companies that are fueling the deforestation, building ports, building roads, finally they were stepping up to take responsibility to pay the costs.”

Schatz says that it’s now almost impossible for deforestation to go undetected. Satellite imaging technology has gotten so good that it will soon be able to pick out not just cleared ground, but forest that’s been thinned for agriculture. The real challenge is in knowing who is profiting. A satellite can’t tell you the name of the company that bought the oil from a newly cleared palm plantation or what became of those chopped trees.

“It’s hard to translate all those satellite monitoring tools into actual reductions without having full supply chain traceability where you can tie specific deforestation events and carbon loss to a specific company’s supply chain,” Schatz says.

He says that international policies or guidelines on how to track supply chains would be helpful in closing that gap. “There are some laws coming out in the UK and the EU certifying certain goods as ‘deforestation free,’”  he says. “If that kind of data can be compelled by governments, we would be in a great spot. Then we could apply all the satellite data we’re developing to actual supply chains, then there’d be no mystery.”

Gibbs says that tools to do that, especially with cattle, are becoming available. “I think there’s tremendous hope in what the companies are doing, and I think they need a lot more pressure,” Gibbs says. “Like when a company promises to clean their supply chain five years from now, that’s ridiculous.”

Despite regional successes, the global picture doesn’t look good. In 2014, a smaller group of 39 countries signed an agreement called the New York Declaration that aimed to cut tropical deforestation in half globally by 2020. According to an analysis from conservation news site MongaBay, parties that signed the declaration, including Canada, Indonesia, and several states in the Brazilian Amazon, have made bigger strides towards deforestation than the global average. But signatories still didn’t hit their target: instead, tree loss in their countries went up 14 percent.

Successes under the declaration have been fleeting. Since nationalist president Jair Bolsanaro took power in Brazil in 2019 with the backing of right-wing agricultural interests in the country’s interior, chainsaws have roared back to life. Even reform-minded companies need that kind of public support: as the research on the soy moratorium in Brazil pointed out, government support, from centralized property registration to environmental monitoring, was key to the success of industry-led efforts.

Even if countries follow through on the commitment, they may have different understandings of what it means to “halt deforestation.”

As Reuters reported, Indonesia has actually changed its tune in the days since it endorsed the commitment. Environment minister Siti Nurbaya wrote on Twitter that “Forcing Indonesia to (reach) zero deforestation in 2030 is clearly inappropriate and unfair.” Instead, she suggested that the country interpreted the commitment to mean that by 2030, it would sustainably manage its forests.

Sustainable forest management could mean policies that allow cutting old-growth forest as long as the land was replanted later, or offsetting cut forests by replanting elsewhere. In theory, those replanted forests  could reabsorb carbon from harvested trees. But in practice, says Sophie Gilbert, a forest ecologist at the University of Idaho, old-growth ecosystems can store carbon very differently from young forest. In the Tongass National Forest in Alaska, for example, the majority of carbon gets locked up in giant, old trees, Gilbert says. Planting a whole bunch of new trees won’t always recreate that effect.