Exploring the complicated link between volcanoes and religion

Did an eruption turn Icelandic vikings into Christians? 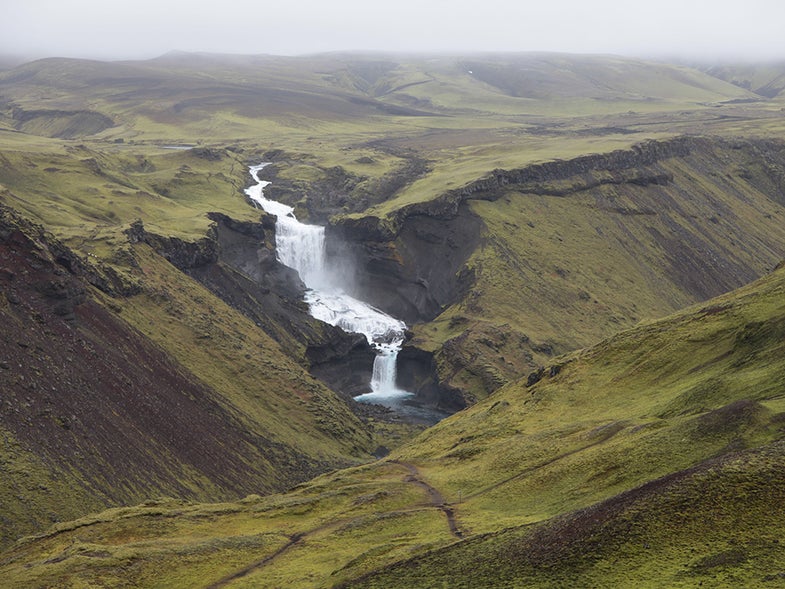 In the late tenth century, the pagans and Christians of Iceland were gathering at Þingvellir (pronounced Thingvellir), a region in the Western part of the country surrounded by lava fields, to debate whether the entire nation ought to convert to Christianity. Then a volcano erupted. According to legend, a pagan stood and declared that the gods were angry and Iceland should reject Christianity. But then the prominent chieftain Snorri Goði (pronounced gothi) stood and asked the room, “Then what were the gods arguing about when the lava we are now standing on burned?” This account, passed on by Scandinavian literature expert Sian Grønlie of Oxford University, is typical of Iceland in that era: pagans dealing with the rise of Christianity as the latter’s all-encompassing explanation for the world replaced local rites and customs. All the while, the nation’s volcanoes were as active as ever, with each eruption described as a miracle or just another Tuesday depending on who you asked and whose worldview stood to benefit from an explanation. “One thing that struck me working on volcanoes around the world is that pretty much anywhere you find volcanoes that have been active in living memory, you find cosmologies that are shaped around that activity,” says Clive Oppenheimer, a volcanologist at University of Cambridge. “It would be very strange if you didn’t fit a volcano and its activity somehow into your cosmology if you lived around one. It would be very strange if you pretended it wasn’t there or you didn’t wonder about its activity.” Oppenheimer recently implicated one volcanic eruption in particular as a cause for Iceland’s official conversion to Christianity, or at least as a tool used to justify that conversion to the next generation. The Eldgjá eruption of the 10th century is the largest volcanic eruption in Iceland’s known history. In March, Oppenheimer finally pinned down the exact year in which the eruption occurred—something past researchers had only been able to guesstimate.

Researchers previously presumed, based on ice cores from Greenland, that the eruption happened anywhere from 932 to 942. When a major volcano erupts, sulfurous dust and ash billow out into the atmosphere, some of which may end up landing around the north pole. Layers of ice gradually grow to form chronological records of weather and atmospheric conditions. Researchers can drill down, essentially looking back into time to see changing seasons and major natural events from centuries before.

But wind can pull the ice—and whatever particles it trapped—away from the surface, and scientists can place their drill in the wrong spot. For one reason or another, the ice cores are rarely perfect. So when Oppenheimer learned that Eldgjá actually erupted in 939 and didn’t settle down until well into 940, it was because he—almost accidentally—found a new way to look back in time.

“I didn’t set out to investigate Eldgjá or to date the eruption,” says Oppenheimer, “I was actually trying to date another eruption called Changbaishan on the border of China and North Korea.”

Oppenheimer happened to find trees killed by the Millenium Eruption of Changbaishan volcano that had also been alive during a solar storm in 775. Solar storms cause large spikes in the radioactive isotopes measured in carbon dating that can be found by analyzing a tree’s rings. That storm left its mark on tree rings around the world, as well as in ice cores, which allowed scientists to precisely calculate the year in which it occurred.

Because scientists already knew exactly when the solar storm happened, all Oppenheimer had to do was count the rings of trees killed by the Changbaishan eruption. Once he had that date, he could essentially calibrate the ice cores affected by Eldgjá to arrive at the correct date for that eruption as well.

For a research project so grounded in precision, Oppenheimer and his team also published a second, more speculative side of their work that has some Iceland historians up in arms, generating some fantastic headlines along the lines of “Ancient volcanic eruption made vikings convert to Christianity.”

In his research article, Oppenheimer compared Eldgjá’s devastating eruption to accounts in the Icelandic poem Voluspá, written some 60 years later as Iceland was converting to Christianity. Oppenheimer suggests that it tells a story very relevant to the country at that time: the death of the old gods and their replacement with a singular deity.

The poem—which includes scenes like steam and fire bursting from the ground, acid rain, the sun going dark, and several cold, woeful summers—could reasonably be an account of a major volcanic eruption like Eldgjá’s.

“I don’t think there’s anyone who would question that there are references to someone who’s seen a volcanic eruption,” says Oppenheimer.

But a number of historians who have studied Iceland’s conversion to Christianity and were unaffiliated with this new research, including Sian Grønlie, reject Oppenheimer’s logic.

“[This article] does not take into account what we know about the oral nature of poems like Voluspá,” says Gísli Sigurðsson, a historian at University of Iceland. He agrees that the visuals of the poem likely allude to Icelandic volcanoes, but given that the poem could have existed for generations before someone put it to paper, along with the fact that apocalyptic imagery is quite common in mythology, it’s impossible to draw a conclusive link between Voluspá and Iceland’s conversion.

Historians also commented on the other factors that led to Iceland’s official switch to Christianity. Grønlie explains that this happened after a consensual decision made by the Althing, Iceland’s national parliament, in either 999 or 1000, depending on which calendar you use. It was all very civil; the pagan representatives decided that everyone in Iceland—about 40,000 people at the time—should become Christian, but some pagan practices would continue. No miracles or apocalypse required.

“I find a relation between volcanic eruptions and the introduction of Christianity a pure fantasy,” says Jens Ulf-Moller, a historian who studies Iceland’s conversion.

Ulf-Moller explains that Iceland’s Christians, who existed since the nation was first settled in 874 AD, were likely influenced by surrounding Irish, Scottish, and Norwegian populations, which had already converted to Christianity and Catholicism. It’s not like there wasn’t a single Christian on the island; pagans and Christians had been sharing the landmass for generations.

Iceland was dependent on trade with Christian Norway, and because Christians were often reluctant to do business with pagans, the nation’s democratic approach to official conversion was a matter of practicality. Before conversion, many vikings would undergo prime-signing, a rite that involved marking themselves with a cross to acknowledge Christianity’s presence and significance even though they personally had not converted.

Also, Grønlie explains, the reference to the “powerful one who rules all” arriving to the seat of judgment only appeared in a second version of Voluspá, which was written much later.

“I think there’s no reason to assume that this was originally part of the poem—it’s been added later to Christianize it. So it’s slightly deceptive of the researchers not to have mentioned that this stanza is a variant found only it a late manuscript,” says Grønlie. “I can’t see how the volcanic imagery in the poem is being used to persuade anyone to convert. Rather, it has enriched the poet’s imaginative recreation of the pagan Ragnarok.”

Oppenheimer knows that his argument about Iceland’s religious history goes out on a limb. “We’re trying to be a bit provocative in this paper by suggesting that these things are linked. It’s speculative and provocative, and I hope it will stimulate further research,” he says.

So we know that Eldgjá didn’t make the vikings kneel down and pray to Jesus. But we also know that it was devastating. There are plenty of written records of a similar eruption from the Icelandic volcano Laki in 1783, which killed off one-fifth of the country’s population over a matter of years. It also poisoned much of their crops, livestock, and horses. As Oppenheimer pointed out, a priest by the name of Jón Steingrímsson didn’t hesitate to frame his vivid accounts as God’s displeasure with the wicked people. Icelandic society more or less operated at the subsistence level until the 19th century, so it’s not a huge leap to assume similar devastation occurred when Eldgjá erupted.

But for more recent case studies on how religion and cultures are shaped by volcanos, and a glimpse at how we might respond to a major eruption today, we need to look elsewhere. For instance, traditional Hawai’ian beliefs did and continue to depend on volcanic activity. When a volcano erupted, it was not uncommon to make offerings to Pele, the goddess of fire and volcanoes. Even after Christianity eventually replaced more traditional beliefs, leaders continued to pray for volcanoes to return to dormancy, though engaging in a traditional ritual while praying to the Christian god instead of Pele was seen as an act of defiance.

Or consider the Mormon missionary William Cluff, who in the middle of the 19th century traveled to Hawai’i. In a unique twist on an “atheists in foxholes” moment, Cluff’s thoughts went to Pele when he became temporarily trapped within a volcano. In his analysis of Cluff’s powerful experience, Brigham Young University philosopher David Grandy declares that there must be truth to traditional Hawai’ian beliefs, though he is careful not to elevate them to the same level as Mormonism.

Even more recently we have the 2006 earthquake on Java and a 2016 quake near Sumatra, both in Indonesia. Indonesia is home to myriad officially-recognized religions and even more indigenous religious practices that are always changing over time and according to the interests of different people, says Judith Schlehe, a cultural anthropologist at Germany’s University of Freiburg who has spent years living and researching in Indonesia. She explains that after the 2006 quake, some in the area believed they would be protected by sea and volcano deities who were treated as local governors, just as ancient Greek cities had their own patron gods. Because of that, the people were shocked that an earthquake happened at all.

In the aftermath of the earthquakes, Schlehe found that people’s explanations for the destruction matched their own complaints—things they wanted changed about society or the current state of politics and the economy. Many argued that the spirits had sent a warning, and others claimed to have special powers and connections to spirits.

“I suppose and conclude from literature research that the basic urge for and the way of meaning-making is very similar for all humans when we are shocked by a natural disaster,” says Schlehe. “We try to relate to it, create resonance, rationalize, embody, control, exploit it, and we contextualize the event.”

Above all else, Schlehe insists that Indonesia and Java ought to be de-exoticized. It is perhaps easy to think of ancient vikings falling to their knees and praying because they can’t possibly understand why the ground beneath their feet is splitting as fire explodes into the sky. But even today, people’s theology will continue to shift in response to the major events around them. Just because it most recently happened far from home doesn’t make it less real.

“…We humans—even if we find all kinds of explanations, rationalizations and technical devices—can never achieve complete control over natural events,” says Schlehe.