In habitat restoration, the need for darkness is largely overlooked. But for some species, it is necessary for survival. 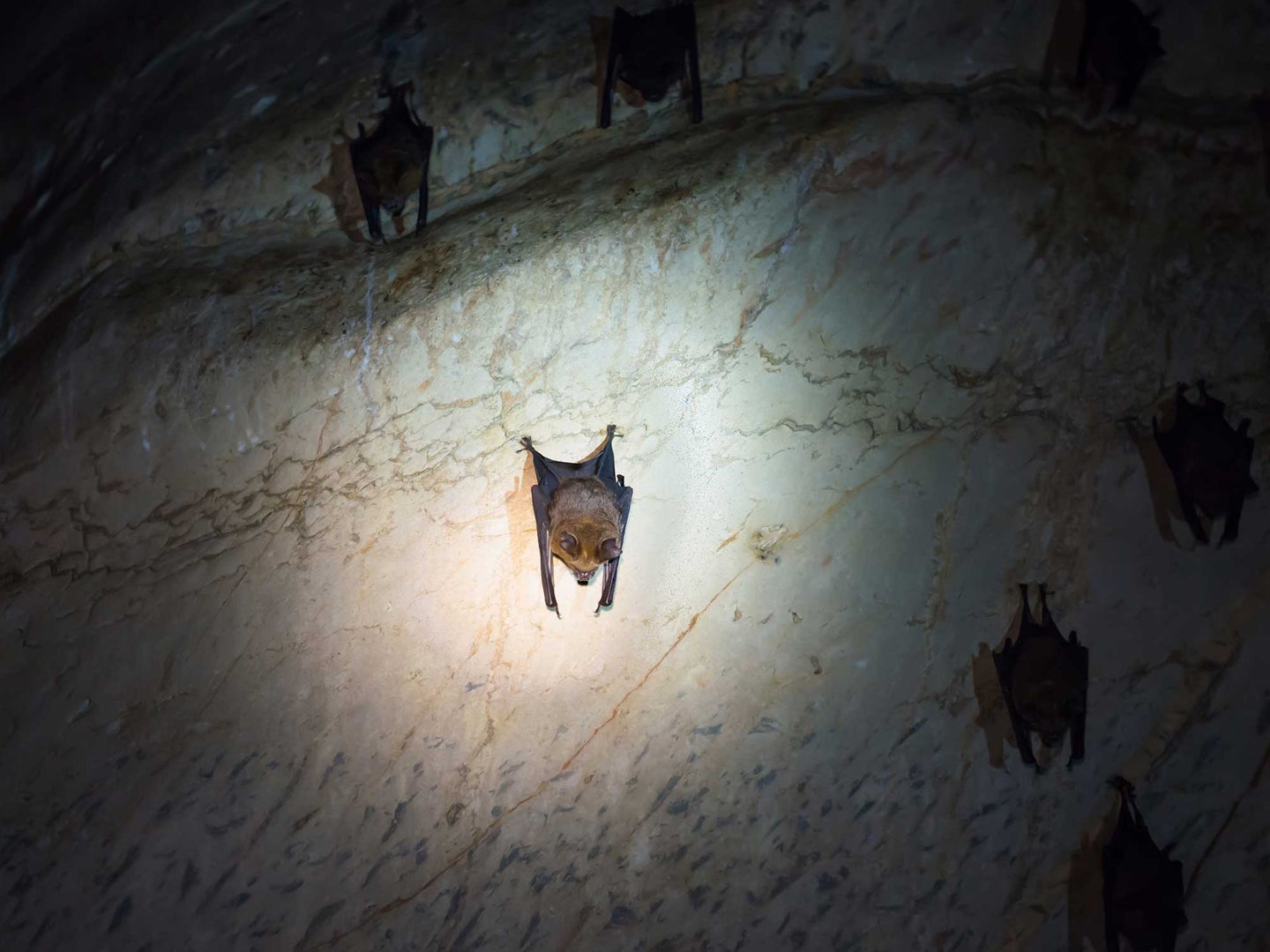 A FEW YEARS AFTER a public-private partnership established the Nature Reserve of Orange County to protect and restore southern California’s rare coastal sage scrub habitat, biologists documented the presence of 35 native reptiles and amphibians on the 37,000-acre site. They also noted two conspicuous absences: the California glossy snake and the long-nosed snake.

Both snakes are nocturnal, preying primarily upon sleeping lizards. Catherine Rich and Travis Longcore, editors of a 2013 book on the effects of artificial night lighting, named light pollution as the leading hypothesis for the snakes’ absence in much of urbanized southern California. The snakes’ habitat, for the most part, looks perfect, said Longcore in an interview with Undark. But when it comes to species that would normally be active during the new moon, when there’s very little natural light, “We just don’t find them in very light-polluted sites,” he said.

For modern humans, the night sky is the stuff of poetry, romance, and spiritual wisdom. To be cut off from it is painful, but not usually a matter of life and death. Wildlife, on the other hand, may struggle to survive when artificial light disrupts the night. It’s widely known, for example, that sea turtle hatchlings become disoriented in the presence of bright city lights and may wander away from the ocean, increasing their risk of being eaten by predators.

Less well-known, but equally vexing, is the role artificial light can play in habitat fragmentation. In March of this year, Longcore and a group of 20 researchers published a paper describing darkness as a critical component of healthy, functioning habitats. The authors drew on a body of research conducted over the past two decades that suggests artificial light at night restricts the range of some species, making it more difficult for them to forage and find mates. Artificial light, in this sense, functions similarly to roads, fences, and walls—physical barriers that biologists have long understood pose a threat to sensitive species.

When it comes to habitat restoration, the need for darkness is largely overlooked. Louise Misztal is executive director of Sky Island Alliance, an environmental nonprofit helping to map light pollution along an 84-mile stretch of isolated mountains along the U.S.-Mexico border, among other projects aimed at improving the distinct Sky Island habitat. Despite her group’s efforts and a steady increase in scientific interest, light still isn’t really a part of the conservation, said Misztal. “I haven’t noticed any real uptick in that, in light being a focal point of habitat restoration.”

It’s a significant oversight, scientists say, given that artificial nighttime light affects a large part of the globe. In the United States, nearly half of the land surface is bathed in artificial light from sundown to sunup. Across the Atlantic, the situation is even more pronounced, with 88 percent of European land surface affected. In total, around a third of the world’s population can’t see the Milky Way from their own backyards, and for every human being who misses the night sky, there are countless nocturnal animals that become disoriented and vulnerable when artificial light erases the night.

TO SUPPORT PLANT and animal communities, wrote the authors of the March paper, it’s important to identify, preserve, and restore dark infrastructure. In an email to Undark, Longcore defined this as “a system of protected areas, corridors, and stepping stones that provide natural darkness, or close to it, across the landscape. A system that provides the multiple benefits of the night, just as green infrastructure provides the multiple benefits of living systems.”

Longcore, an environmental scientist who works with UCLA’s Institute of the Environment & Sustainability, has been studying the effects of nighttime light pollution for over 20 years. During this time, habitat restoration as a conservation strategy has been ramping up exponentially. A 2018 review identified more than 3,000 research papers on the subject of ecological restoration published between 1997 and 2017. Yet as the March paper noted, the benefits of darkness are still notably absent from almost all international conservation strategies.

Artificial nighttime lighting isn’t talked about much locally, either. A 2018 paper that presented a framework for ecological restoration in urban ecosystems mentioned environmental stressors like chemical pollution and invasive vegetation, but it did not specifically mention the presence of artificial light at night, or “ALAN,” as it is frequently shorthanded in the scientific literature. Similarly, a 2021 paper discussing how conservation actions for salmon habitat should be prioritized in the urban waterways of Puget Sound mentioned urban runoff, nonnative species, and climate change, but not ALAN, even though a study from the previous year found that light pollution in Puget Sound makes juvenile salmon about six times more vulnerable to predation.

“I think that’s the one thing that we forget,” said Debra Shier, director of recovery ecology for the San Diego Zoo Wildlife Alliance. Shier works with endangered small mammals like the Pacific pocket mouse and the Stephens’ kangaroo rat. “We’re so used to just flipping on the light because we’re diurnal,” meaning active during the day. But, she explained, “these nocturnal species’ eyes are so sensitive to light. That’s how they function in pure darkness.”

Restoration ecologists and biologists spend a lot of time thinking about the species that will use restored habitat — where they will shelter, how they will find water, what they will eat, what might eat them. But scientists are human. They have much weaker biological motives to seek darkness; in fact, it’s so peripheral to the human worldview that even biologists can forget that darkness, for some species, is necessary for survival.

“We are primates and visual perception steers our actions and many of our emotions,” wrote Steven Handel, a professor of ecology and former director of the Center for Urban Restoration Ecology at Rutgers University in New York, in a 2021 article for Restoration Ecology. “Consequently, the goals of our projects often are based on the diurnal appearance and functioning of sites. Success is regularly measured by aesthetics and the joy of human visitors as they saunter through restored landscapes during the day.”

In an interview with Undark, Handel also noted that restoration projects are often funded by public tax dollars through state and local agencies, and agencies are deeply influenced by public perception. “If you tell them, ‘We want to do some features that will improve nighttime ecology that no one will ever see,’” he said, “that’s a really hard sell to a government agency.”

ARTIFICIAL LIGHT, scientists have learned, disrupts both predators and prey. Consider a Stephens’ kangaroo rat, said Shier, who leads relocation and reintroduction projects for these animals in California. A single rat needs a 30 x 30-meter space in which to live and forage. For a whole population, that number goes up exponentially.

“If there’s light in the area within 40 meters of a kangaroo rat, they just won’t choose to forage there because it’s too risky for them,” she said. That’s a big problem when trying to find suitable places for reintroduction. “We know what the species’ range is, but then you look at all the housing and the lighting, then it just reduces the suitable habitat substantially.”

Predators avoid light too, even those that are unperturbed by buildings and other signs of human occupation. In 1995, Paul Beier documented how a juvenile male mountain lion spent two hours attempting to avoid a well-lit sand factory but was not afraid to enter an unlit industrial park. In the March paper, Longcore came to similar conclusions when he used satellite data to map the darkest parts of the greater Los Angeles area and predicted they would be consistent with the travel corridors used by mountain lions. The presence of artificial nighttime lighting, Longcore said, can have a profound impact on where mountain lions will go and how they will get there. They are smart animals, he added, and understand “lights mean trouble because lights mean people.”

Los Angeles’ mountain lions currently live in small habitats fragmented by potentially lethal barriers like Highway 101, and inbreeding in these populations will continue to be a problem until connectivity can be restored. This is the goal of the world’s largest wildlife crossing, which is currently under construction and will eventually span the busy 101 freeway. Unlike many other habitat restoration projects, this one was designed with darkness in mind, said Robert Rock, a landscape architect and the crossing’s lead designer.

Los Angeles County is a bright place, with skyglow and lighting along the freeway itself, in addition to the reflective light from car headlights. Because those conditions could deter mountain lions and other nocturnal species from using the crossing, designers are adding some unique features to the crossing and its approach, such as earthen berms engineered to block light and sound. They have also worked with the California Department of Transportation for shorter freeway lights, making them cover less area, and their design plans include the use of concrete that has low surface reflectivity to help mitigate the impact of headlights on the freeway.

Rock hopes the difference in lighting along that short section of 101 will act as a signal for motorists, too, reminding them to stay alert as they drive through the habitat restoration zone.

WHILE DARKNESS MAY be good for wildlife, calls to reduce nighttime lighting have sparked concern among some members of the broader public. “We’re constantly battling the fear of darkness,” said Ashley Wilson, director of conservation for the International Dark-Sky Association, which has been promoting “responsible lighting policies” since its founding in 2001. People worry that protecting the night sky means turning off all the lights, all the time, said Wilson.

Such an all-or-nothing approach in not necessary. Instead, simple changes can make a meaningful difference. These include directing light downward, using the proper intensity, and setting motion sensor lights to stay on for no more than five minutes, said Wilson. And people can shut off lights entirely in places where they aren’t really needed for safety.

Some countries have already taken large-scale steps to protect sensitive species in developed areas. “Europe is a bit more advanced on this than we are in the United States,” said Longcore. Sweden, for example, has created a policy that leaves stretches of its roadways unlit in order to provide safe crossing areas for animals that shun light.

Finding the right strategy for each target species in each specific area isn’t always straightforward, though. Different species respond to different approaches. Shier said motion-activated light is much less bothersome for kangaroo rats than light that stays on all night long, simply because motion sensors don’t tend to be triggered very often, especially in residential areas where people aren’t usually out late at night. Elsewhere, research has shown that some species of light-averse bats like long-eared bats and mouse-eared bats will avoid light on the white and green spectrum, but are just as happy to forage under red lights as they are in total darkness. Still, red light isn’t the solution for all bat species—the lesser horseshoe bat avoids all light, including red. Scientists might need to do more research to figure out the best lighting for different habitats.

“Ultimately, we need to have these species coexist with humans,” said Shier. “There’s really not enough land on the planet for us to manage this species over here, and keep humans over here.” That means turning the lights off in some places but changing them in others, and trying to find a compromise that makes both people and wildlife feel like darkness is a safe place to be.