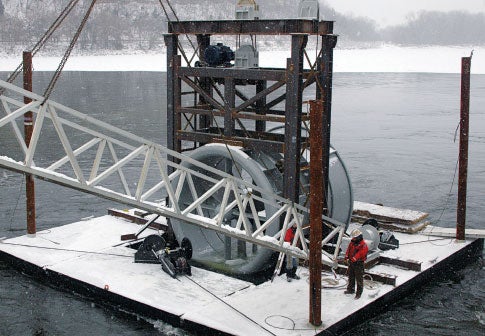 The Big Picture: Conventional hydroelectric power (think of the Hoover Dam) provides 7 percent of the electricity in the U.S. But the only way to increase that number without damming more rivers — which causes widespread ecological damage both above and below the dam — is to use nonconventional hydropower sources that capture energy from the movement of waves, rivers and tides.

The future of hydropower is taking shape just downstream from a standard hydroelectric dam in Hastings, Minnesota. The power isn’t hydroelectric, though; it’s hydro_kinetic_, generated from the motion of free-flowing water.

Installed this winter in –30° weather and switched on in January, the Houston-based Hydro Green Energy’s pilot plant is the first federally licensed hydrokinetic project in the U.S. Like an underwater wind turbine, it will produce electricity by using the high-velocity current gushing out of an existing hydroelectric dam to turn a 12-foot, three-blade fan. Known as “run-of-river” hydrokinetic, Hydro Green’s technology is similar to turbines that are being used to tap tidal power in Europe, except it’s optimized to work in water flowing in just one direction (tidal turbines use water flowing both in and out).

To generate utility-scale power, turbines would be combined into arrays. They could be used in free-flowing rivers too, but coupling them with existing hydroelectric dams eases the Federal Energy Regulatory Commission’s licensing process and offers close access to the electricity grid. Hydro Green says that its technology can create power much more cheaply than a windmill can (4 to 7 cents per kilowatt-hour, compared with 10 cents per kilowatt-hour for wind).

The main goal of the plant, which is rated for 100 kilowatts — enough to power 40 homes — is to answer some essential, basic questions: How do you build blades strong enough to withstand the constant flow of water? (Another company, Verdant, installed an experimental hydrokinetic project in New York City’s East River in 2007, only to have the rotors snap days later). How do you balance the presence of a turbine with the local ecosystem — for example, how does a hydrokinetic plant affect the river’s fish population? This spring, Hydro Green embarked on a $500,000 study to determine the impact of the turbines on six species of river fish, and a second, 150-kilowatt turbine will soon be up and running.