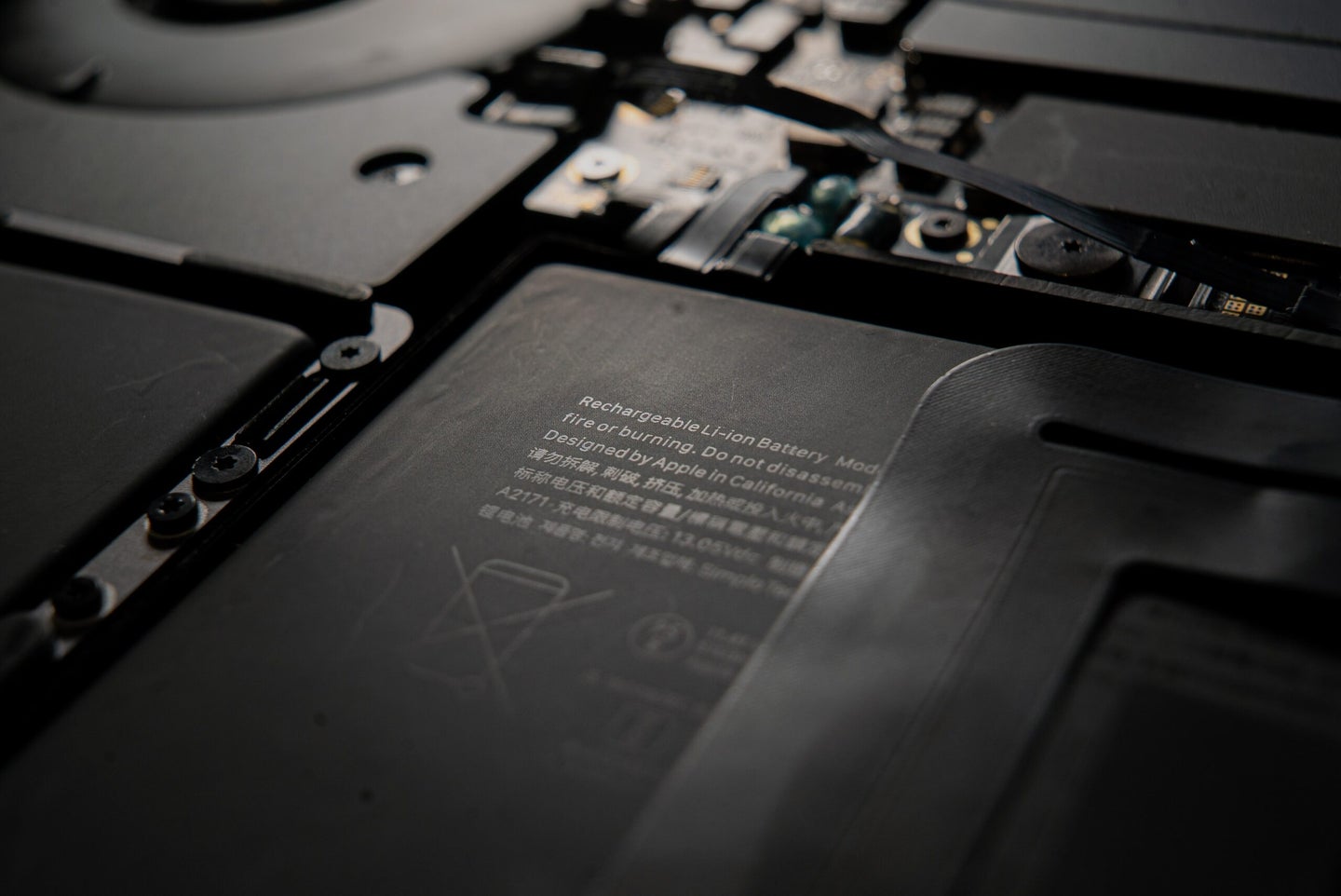 The first step is not throwing your old gadgets in with the regular recycling. Mika Baumeister on Unsplash
SHARE

Lithium-ion batteries are omnipresent—they are in laptops, TVs, mobile phones, electric vehicles, e-cigarettes, power tools, and even in some greeting cards. In 2019, the global lithium-ion battery market was valued at $36.7 billion. By 2027, it is projected to grow to more than $129 billion.

This energy storage technology has been transformational for the clean energy sector, all thanks to lithium-cobalt oxides’ high energy density. But on the flip side, these power sources are infamous for being volatile and turning into fire hazards—particularly at the end of their life cycle. In the last few years, dead lithium-ion batteries were responsible for catastrophic fires breaking out in various recycling plants in the US, UK, France, and China.

In 2016, a devastating fire broke out at the Shoreway Environmental Center in San Carlos, California, resulting in damages worth $6.8 million. The cause of the fire was an improperly recycled lithium-ion battery. They have also caused disasters in landfills and garbage trucks. It is estimated that the US and Canada have incurred losses worth more than $1.2 billion because of lithium-ion battery fires.

The core problem takes place in end-of-life old lithium-ion batteries which end up in the trash or recycling bins. During collecting and recycling processes, these batteries can go undetected in piles of garbage. They can get crushed after getting compressed in a truck, accidentally run over by a loader, or jostled around on conveyor belts in waste facilities.

When the barrier between the cathode and the anode of a lithium-ion battery ruptures, it causes a breakaway thermal reaction from the lithium molecules. These molecules can then reach extremely high temperatures within a short time and ignite or explode.

[Related: Electric vehicle fires are rare, but challenging to extinguish.]

“What makes this technology such a disruptive energy storage device is that they are inherently unstable,” says Michael Timpane, vice president of Resource Recycling Systems, a sustainability and recycling consultancy firm based in Michigan.

“Studies have proved that compared to the number of lithium-ion batteries being sold every year, not a lot goes through e-waste or hazardous waste systems for recycling,” adds Timpane, who has spent the last four years researching this safety hazard with the Environmental Protection Agency. “No one knows the exact number but a whole bunch of these batteries end up in the garbage. The challenge has been in keeping them out of the solid waste stream.”

While recycling batteries is not new for the e-waste industry, used lithium-ion batteries are a new challenge. After all, it is difficult to recover lithium and other rare metals such as cobalt during the recycling process. Since 2021, battery manufacturers like China’s BYD Co, Toyota Motor Corp, and GM, have been working towards making lithium-ion batteries more stable for electric vehicles by using different types of metal such as manganese and phosphate and less cobalt. But Timpane estimates it might take five years to a decade before the technology gets a much-needed upgrade.

Although the average life cycle of light-duty lithium-ion batteries is close to 15 years, by 2030, it is estimated that at least 2,619,000 metric tons of lithium-ion batteries will need to be recycled. The recycling industry in the US has set up new plants with advanced technology and higher capacities to prepare for this surge.

It is crucial to inform communities about the risks of discarding old electronic products with lithium-ion batteries in recycling bins, adds Timpane. Awareness campaigns, like the Call2Recycle project in Akron, Ohio, highlight the need to drop these items only in authorized locations and can go a long way in preventing fire accidents from taking place in the first place.

[Related: ‘Lithium Valley’ could save one of the most polluted areas in California.]

“Many people don’t know the difference between a lithium-ion battery and a common cell battery,” he says. “Prohibiting the disposal of lithium-ion batteries in the solid waste stream and enforcement of that rule will help.”

Another issue is the lack of consistent labeling standards for lithium-ion batteries. While some of the labels only have recycling arrows or text that says “handle carefully” or “call your municipality”, Timpane argues that these vague texts do not adequately inform consumers on how to safely discard old electronic devices.

Timpane adds that in the past year, new lithium-ion batteries being manufactured cannot be removed from devices anymore. “The battery manufacturing community has been responsive and is proactively engaging with the government. In the recent past, their label consistency has also been getting better,” he says. Still, older batteries could still pose a risks to recycling and solid waste plants.

As a rule, once you decide to dispose of your old electronic devices, avoid the blue recycling bin. Instead, make the effort to call the manufacturer and inquire about their collection program or a nearby certified recycling provider who can safely handle hazardous materials.