The Science Of Bubbles

More than just good for a bath, bubbles are a focus of new research 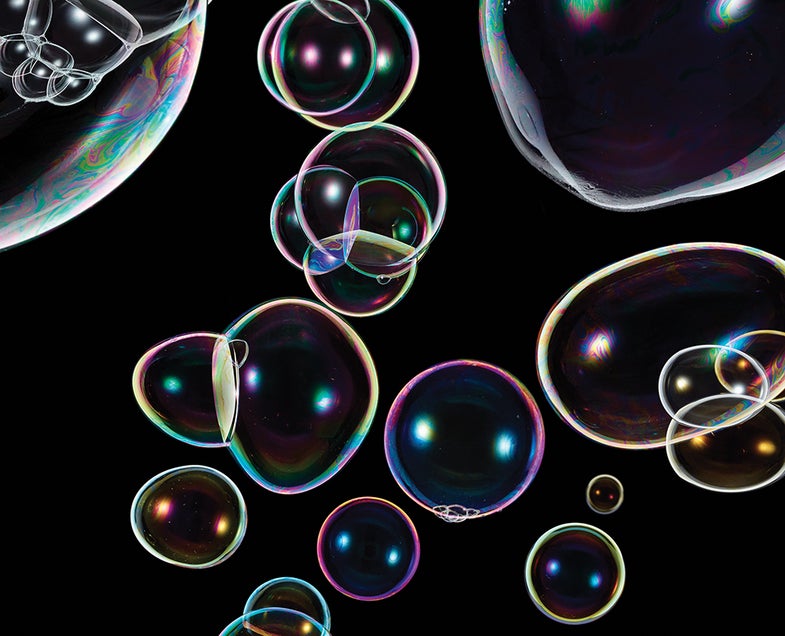 Bubbles may seem pretty ordinary. We tend to think of them just as beverage enhancers or entertainment for small children. But scientists are uncovering another side to bubbles: They can perform computations, drive climate, and even act as weapons. “I could teach an entire course on bubbles,” says James Bird, a mechanical engineer and bubble expert at Boston Univer-sity. “The more I learn about them, the more I realize how much we don’t know.” Here, in celebration of summer, the unofficial season of the bubble, we offer a glimpse into the hidden world of this common, albeit little understood, form.

Scientists have found that when a mantis shrimp strikes, its claw pulls water molecules away from one another, creating a pocket of low pressure in which the water vaporizes. The vapor forms an unstable bubble which quickly implodes, emitting enough force in the process to pummel unsuspecting prey.

Russian engineers used a technique called super-cavitation to propel the Shkval torpedo to a record-setting 230 mph (200 knots). As the nose of the torpedo deflects water, it creates a bubble of vapor which decreases the torpedo’s contact with the surrounding liquid, reducing friction and increasing speed.

Bubbles can be bits. Researchers made logic gates with bubbles that move through etched tubes and act like electrons in circuits. Because bubbles—unlike electrons—can also carry chemical payloads, a bubble computer could, in theory, ferry medications in addition to doing computations.

“In effect, bubbles are helping the ocean breathe,” says Helen Czerski of the University College London. She showed that, upon popping, bubbles within breaking waves release aerosols of salt and sulphur, seeding clouds. She has also shown that bubbles are integral to healthy gas exchange in oceans.