Farewell To H.R. Giger, Architect Of Our Nightmares

The Swiss surrealist behind the "Alien" film franchise has died at 74. 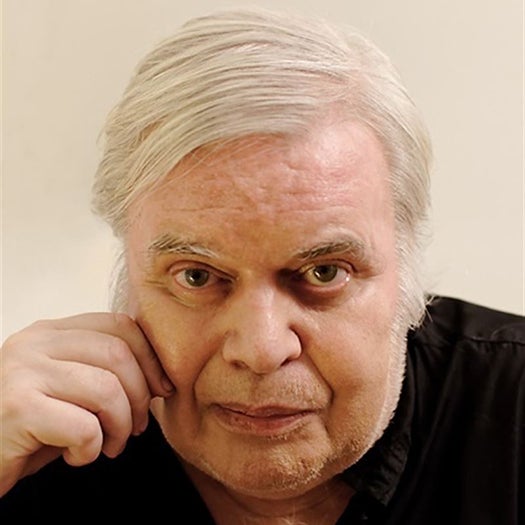 In my mind, the only way to watch _Alien _is in a dark room, where the only source of light is the TV or the laptop as you’re taken on the nightmare tour of a brooding spaceship. This is, I think, how H.R. Giger, the Swiss surrealist artist who created the xenomorph of the _Alien _franchise, would’ve wanted it.

Giger died in the hospital Monday at the age of 74. There will be countless eulogies pouring in today for the man, which is surprising, maybe, considering the collective nightmares he imprinted on (now multiple) generations of science fiction fans. But there may not be anyone who deserves the recognition more.

A sculptor, painter, album designer, and, finally, set designer, Giger created a dark vision of the future that would seem at odds with most sci-fi of its day. Alien _followed the crew of the spaceship _Nostromo, as it’s invaded by a creature that slowly, viciously, and assuredly begins hunting and killing them. Released in 1979, it preceded the other great, brooding film of its time, Blade Runner, by three years, but the two works couldn’t be more different. While Blade Runner imagined a future Los Angeles that was expansive and melancholy, _Alien _was a haunted house film that only happened to take place on a spaceship — it had the metallic surfaces of other movies, but the creeping menace of the film was an otherworldly horror, a gross hiccup of evolution.

If most films saw mechanization as the specter of the future, Giger saw it in biology; indeed, Giger was reportedly only in charge on creating the “alien” aspects of the film, as opposed to the industrial settings. Today’s crop of sci-fi films, I’d argue, borrow more heavily from the epic rather than the claustrophobic feel Giger helped mold. Still: If his vision is underrepresented, it’s because so few could match it in scope.

You could attribute much of that aesthetic to the director of Alien, Ridley Scott, and later, in the first sequel, to James Cameron, but you can’t underestimate the inherent grotesqueness of Giger’s creation. Test footage from the film was uncovered a while back, and even outside the actual movie, the creature is unnerving. (No small wonder it launched so many adaptations in comics and other mediums.)

How did he do it? Many remarked on the disturbing sexual imagery of the alien and other designs, and that’s likely part of it, if a little Freudian. But it’s easier to say this: He was an artist in every sense. The design for the film’s so-called “chestburster” — the young alien that burrows inside and breaks through a character’s chest — was based on artist Francis Bacon’s abstract painting Three Studies for Figures at the Base of a Crucifixion. If any others films about creatures from another world devouring hapless space miners were inspired by post-war fine art, please inform the Ph.D students, because they have a thesis on their hands.

There’s one more reason Giger’s xenomorph stays with us: It’s that voice of the unknown that haunts all exploration, whether in space, or scientific research back on Earth. While most dystopian works have focused on the worst possible consequences of what we were already creating — nuclear power, say, or cloning — Giger perhaps understood that the real terror in the modern world was what we couldn’t predict, and what we weren’t prepared to understand.

The alien spends the vast majority of the film encased in shadow; we get a glimpse here, a quick shot there, until the harrowing end. If I watch the movie in the dark, with only the light from a screen, maybe it’s because I’m convinced I’ll catch a glimpse of something I’ve never seen before.