Why Peter Thiel Pays Students To Drop Out Of School

Dream investor Peter Thiel is giving budding scientists a financial leg up, but with a controversial twist. 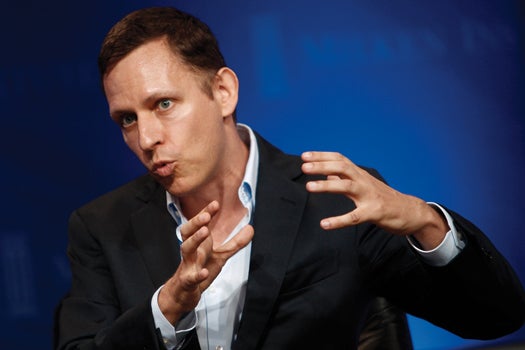 Four years ago, billionaire entrepreneur Peter Thiel announced the Thiel Fellowship, a two-year start-up accelerator for young science and tech prodigies. The program awards 20 kids under age 20 $100,000 each to pursue world-changing innovations and businesses. The one caveat: They have to drop out of school to get it. The unorthodox program did not go over well with many. Larry Summers, former Harvard president and U.S. Treasury secretary, told attendees at a conference last October that it was “the single most misdirected bit of philanthropy in this decade.” He called the fellowship “meretricious in its impact and the signals that it sends to a broader society.”

Thiel, a 46-year-old tech prodigy himself, has never hewed to convention. He co-founded PayPal in 1998, and in 2004 became the first outside investor in Facebook. He then sank his wealth and business acumen into global venture-capital and hedge funds, which have invested in such startups as SpaceX, LinkedIn, Yelp, and Spotify. Thiel, in other words, has a long history of backing winning entrepreneurs, and now he’s betting on the potential of his fellows. Some 500 teenagers apply each year for a slot. “These people are phenomenally talented,” he says, “so I think this subset will make a very big difference in the years and decades ahead.”

A college education, Thiel argues, is grossly overpriced and contributes to a national student-debt burden that now exceeds $1 trillion. He’s not aiming to fix the U.S. education system, but says he is challenging the assumption that college is the only route to success. “How did we ever get to the place where we have a one-size-fits-all society?” he says. “I think we need more diversity, some genuinely different paths for people.”

I think we need more diversity, some genuinely different paths for people.

Certainly some of the more than 80 Thiel fellows excelled far more outside the classroom. Take, for example, Thomas Sohmers, who abandoned high school last year as a 17-year-old junior in Hudson, Massachusetts. “I was an absolutely horrible student,” he says. He let some grades slip to a D while spending most of his time at MIT’s Institute for Soldier Nano-technologies, where he had started working as an intern in eighth grade. During his fellowship, Sohmers and his MIT mentor co-founded REX Computing, a start-up that develops energy–efficient, high-performance microprocessors to power servers and supercomputers.

His trajectory isn’t unusual. The Thiel program allows fellows to pursue independent projects while connecting them to a network of mentors. Nearly 60 fellows have turned those pursuits into companies and nonprofits in fields such as synthetic biology, aerospace, and neural prosthetics. Collectively they have raised more than $100 million in funding.

Thiel wants more self-motivated, talented kids to have more avenues to chase their dreams, and he praises initiatives such as Y Combinator and Techstars, which both offer seed money and mentorship opportunities. “We want to be a part of a broader effort to think about how we as a society can accelerate innovation and progress,” Thiel says.

Some universities have taken offense. “I don’t like it,” says Bill Aulet, managing director of the Martin Trust Center for MIT Entrepreneurship. “We shouldn’t pay people to drop out of school.” Such accelerators have reframed the quest for higher education—and colleges have noticed. “We’re not losing students to Stanford or Harvard,” Aulet says. “Our competition is places like Thiel or Y Combinator.”

Schools, in turn, have begun to offer more support to entrepreneurs on campus. MIT, for example, has been building a summer program called Global Founders’ Skills Accelerator. It awards up to $20,000 to teams of students, recruited internationally, that meet mutually agreed upon project milestones. Harvard, Stanford, and Yale have also expanded their entrepreneurship programs.

Even Thiel acknowledges that college probably offers more opportunities for many kids. In fact, he taught a class on entrepreneurism at Stanford, his alma mater. And some of Thiel’s fellows have gone back to school. Eden Full, now 22, returned to Princeton after developing SunSaluter, a device that helps solar panels track the sun. Now a senior in mechanical engineering, she juggles running a nonprofit with her coursework. “The Thiel Fellowship changed my life, but so has Princeton,” Full says. “I would not be the person I am today without both of these experiences.”