Which is More Powerful: A Giant Microscope or a Giant Telescope?

A battle of resolution 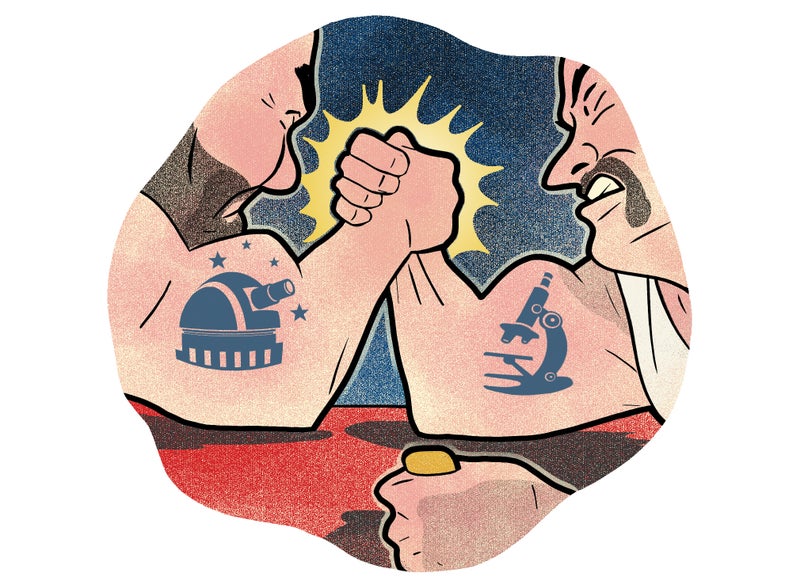 The Scanning Transmission Electron Holography Microscope stands 15 feet tall and weighs 14,000 pounds. “It’s such a powerful machine,” says Rodney Herring, who runs the microscope facility at the University of Victoria in Canada. It can image at an unprocessed resolution of 35 trillionths of a meter, making it more powerful than any other microscope in the world.

And any telescope too.

Microscopes like Herring’s take images using electrons, which have a wavelength five orders of magnitude smaller than that of light. Telescopes can’t use the same approach, because electrons from a far-off source would be deflected or absorbed before they made their way to Earth.

“Electrons don’t reach us, but light does,” says Herring, which is one reason that “we can see a lot better looking down at small things than we can looking out at big things.”

Microscopists can also manipulate their samples. According to Mark Neil, an optical physicist at Imperial College London, illuminating a sample with a pair of lasers can improve the resolution of a normal microscope, from 300 nanometers to 10 nm. Electron microscopes like Herring’s push that down even farther, into the atomic scale.

It’s hard to find a comparable measure for a giant telescope. Astronomers are less concerned with linear resolution than they are with angular resolution, measured in arc-seconds (1/3,600 of a degree). The Hubble Space Telescope, for example, can take images less than 0.1 arc-seconds. The European Extremely Large Telescope—currently under construction on a Chilean mountaintop—will have an angular resolution of 0.01 arc-seconds or better.

Correction, March 1, 2016: The original version of this story incorrectly identified the University of Victoria’s location as being in Vancouver. It’s actually located on Vancouver Island in Victoria.