Why hasn’t the U.S. adopted the metric system? 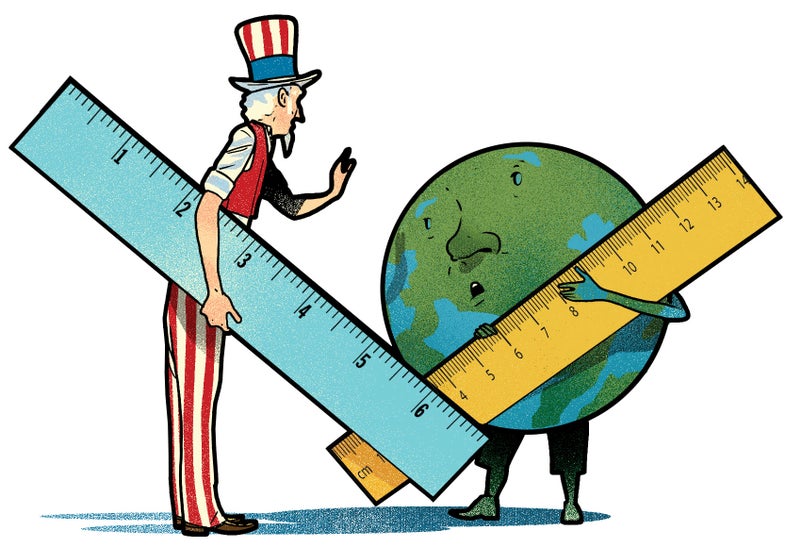 While most nations use the metric system—those units of decimals that are universally employed in science—the U.S. still clings to pounds, inches, and feet. Despite several high-profile attempts to change that, Americans refuse to convert.

Thomas Jefferson first tried to move the nation toward a decimal-based system in 1789. But without support from scientists, his idea flopped. More than a century later, in 1906, telephone inventor Alexander Graham Bell told Congress that “few people have any adequate conception of the amount of unnecessary labor involved in the use of our present weights and measures.”

Strong words, but still no change.

Things looked promising in 1968, when Congress authorized a three-year study that eventually recommended converting to metric and laid out a 10-year plan to get there. But they did not make the switch mandatory. Instead, business owners and people who opposed big government and globalization—and who saw conversion as ceding control—won the battle for hearts and minds. A Gallup poll at the time showed that 45 percent of Americans opposed the switch.

The benefits of switching are negligible, but the costs are huge.

Today, the problem with metric is the same as it’s always been: The benefits of switching are negligible, but the costs are huge. Manufacturers would have to convert values on packaging. Everyday people would have to replace their tape measures, switch to metric wrenches, waste time figuring out what it means to say its 20 degrees Celsius outside.

Even metric fans see the hassle. “Like all educated people, I just assumed it made perfect sense to go metric,” says Donald Hillger, president of the U.S. Metric Association, which was founded a century ago to promote conversion. “Now I look at it and think: ‘Exactly what am I personally going to get from this? I’m going to get annoyed.’”

Still, metric creep is already here. We buy soda by liters, machine car parts in milli­meters, and measure medicine in milligrams. “It’s going to happen,” Hillger says, “but at the rate we’re going, it will take a while.”

Appropriately, it will be a game of inches.

Have a burning question? Email it to ask@popsci.com.