Gray Matter: Watch A Hybrid Rocket Burn From The Inside Out

Seeing through a rocket engine is easier than you might think. 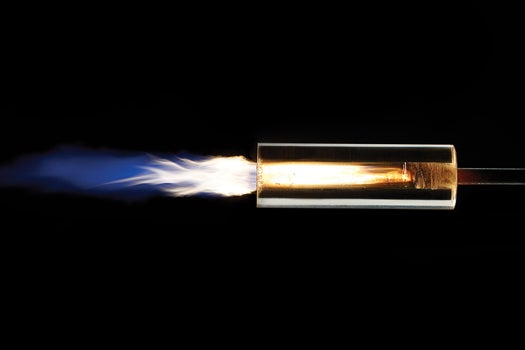 Space tourism front-runner Virgin Galactic hopes to launch customers toward the edge of space later this year. To get them there, in a winged craft called SpaceShipTwo, the company will light up hybrid-fuel rockets. 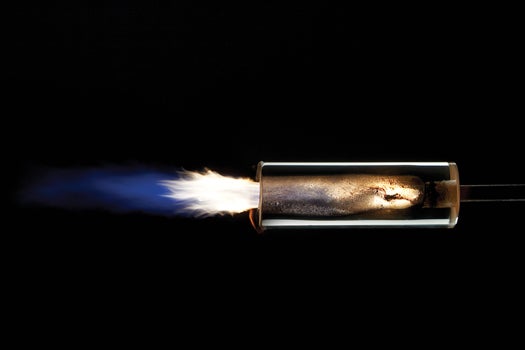 A proper nozzle could increase thrust, but the acrylic fuel serves as its own simple nozzle in this model. The smoldering acrylic rod burns rapidly in the presence of pure oxygen gas.

Learning how rocket engines work can be tricky, so wouldn’t it be cool to see through one? This is easier than you might think.

I built a transparent rocket by drilling a half-inch-wide hole through the length of a 6-inch-long by 2-inch-wide acrylic rod. That’s the whole engine: The acrylic tube is the fuel, housing, and nozzle, all in one piece. To ensure the fuel would burn rapidly, I inserted a half-inch-thick metal pipe in one end and blew pure oxygen gas through the acrylic. (Liquid oxygen would be more authentic but far more dangerous; it’s hard to handle and can lead to explosions.)

I stuck a wad of flaming paper towel into the acrylic rod to light it, then opened the oxygen-gas valve to generate a modest amount of thrust. Increasing the gas flow boosted the engine’s power, transforming a gentle pencil flame into a roaring blast. 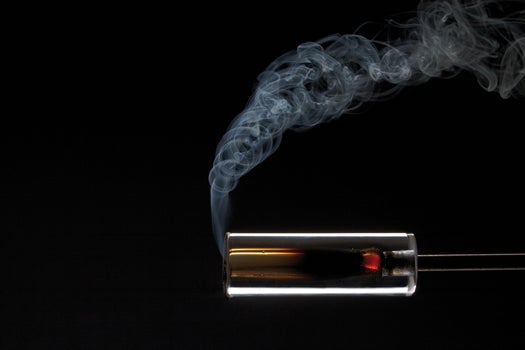 Cutting the oxygen stops this hybrid rocket from burning acrylic and melting into goo.

The rocket is hypnotic: It’s like watching a fire from the point of view of the fuel. The force of combustion drives forward ripples of gooey, burning plastic until finally, the whole cylinder starts to melt. Then it’s time to cut the gas and figure out what to do with a flaming, half-molten mass of acrylic.