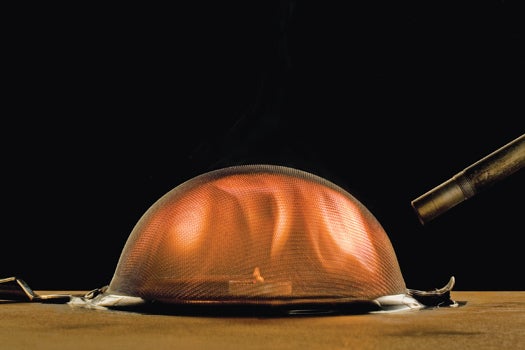 A fine-mesh kitchen sieve with a candle inside simulates a Davy miner’s safety lamp. An explosive mixture of propane gas and air is blown in from the outside. If the mesh is fine enough, the fire will stop at the screen even as the explosive gas flows through it.

If you were a coal miner in the early 1800s, the light you used was an open-flame oil lamp—even though mines were sometimes filled with “fire-damp,” a volatile mixture of air and methane gas. Explosions were inevitable, and at times threw bodies from mine shafts like grapeshot from a cannon. Humphry Davy became a national hero when, in 1815, he found a remedy: Surround the lamp flame with mosquito screen.

Davy, one of the world’s first professional scientists, solved the problem by systematically studying what happened when gases burned. He started with the observation that gas flames would not travel down long, thin metal tubes because the metal draws heat from the flame, lowering the temperature of the gas below the ignition point.

He tried making the tubes thinner and shorter, until he discovered that thin tubes needed to be only about as long as their diameter to prevent fire from traveling their length. The logical end point was fine metal mesh, which you could think of like thousands of very short tubes arranged in a grid.

As bizarre as it sounds (and I really didn’t believe it until I saw it with my own eyes), you can blow an explosive mixture of gases through a fine wire mesh toward a candle flame and, when the gas explodes, the fire stops dead at the mesh—this despite the fact that the gas came right through the holes in the mesh and is just as explosive on the outside as it is on the inside.

Davy refused to patent his invention, preferring to bask in the glory of his role as the miner’s savior. His lamp remained in use, and his name was a household word, right up until the invention of electric light. Today his lamp is all but forgotten, but his reputation as one of the first and greatest chemists lives on. 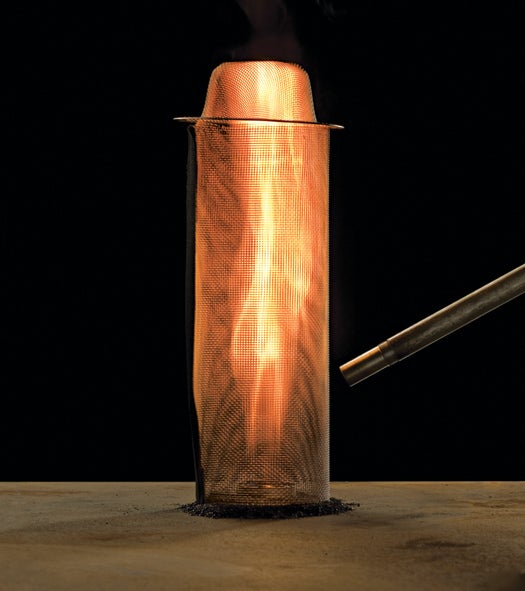