More on Turbines, Cars, and Insanity 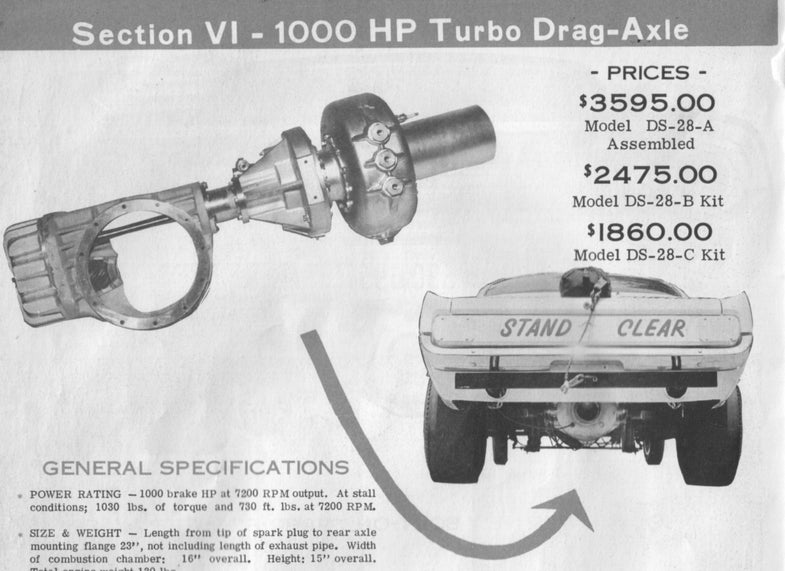 Our own John Carnett’s jet-powered ATV is not the first four wheeled vehicle to sport a turbine. The wheel-scorchingly awesome history of this idea goes back significantly further, to at least the Turbonique hot-rod hop up parts of the middle sixties. BangShift has uncovered videos of Turbonique turbine dragsters (Beetles, go-karts, you name it) in action. Tire smoke, turbine roars, and a staid corporate video explaining how it all works after the jump.

With a selection of products, all about as reasonable as the “1000 HP Turbo Drag Axle” pictured here, Turbonique was one of the most outrageous in an outrageous era of drag racing.

Culling from Hot Rod Magazine’s explanation of these turbines and their fuel (via Jalopnik):

The term monopropellant describes a fuel that will ignite and burn without the presence of atmospheric oxygen. As a point of comparison, the nitromethane used in Top Fuel dragsters is a semi-monopropellant. It requires a little outside oxygen for complete combustion, but only a small fraction of what is required to burn gasoline, alcohol, or kerosene. Most gas turbines run on petroleum-based fuels that require plenty of air to support combustion. They take in atmospheric air at the front and compress it to a high temperature and pressure. Fuel is then sprayed into this hot air, which ignites, creating the high-pressure gases that drive the turbine wheel and make torque. The problem is that a typical air-breathing gas turbine uses over half of its total turbine power to drive the compressor. Turbonique engineers sidestepped the problem and simply replaced the weighty, expensive, and inefficient compressor with a high-pressure storage bottle containing Normal Propyl Nitrate (Thermolene), a stable, milk-white liquid fuel that brings its own oxygen to the party and that moves the engine into the category of a rocket because it can run without the benefit of atmospheric oxygen. When the Thermolene is introduced to the combustion chamber at 600 psi and ignited by a glorified spark plug connected to an on/off switch, the immediate result is an intense release of hot gases to spin the turbine blades. Anti-swirl turbine wheel vanes prevented flames from exiting the tailpipe, but a special wheel was optional for “spectacular flaming night runs.”

The newfound videos, while not shot in resplendent HD as with the Whirl, are incredible. Keep an eye out for the Rocket Go-Kart in the first, and listen to the company’s promotional video explanation of the products in the second.

“According to all accounts this kart went from zero to 150mph in 4 seconds before becoming airborne and sliding out of control.” Turbonique fan site