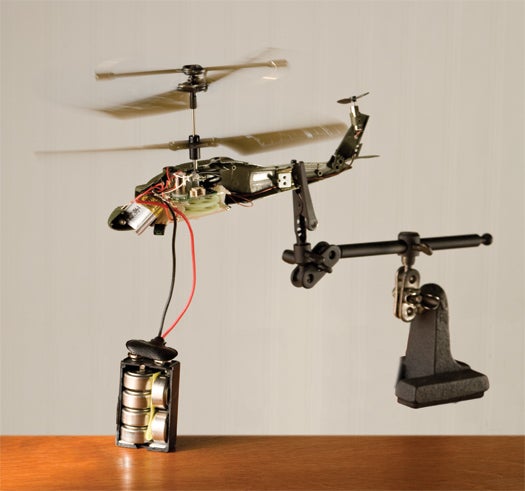 Photographed a Air Battery powering a toy Helicopter and plane and the parts of a battery for Popular Science Gray Matter Febuary issue. Mike Walker
SHARE

A battery that runs on air? Why, that’s almost as good as a car that runs on water! Those cars are fantasy, but batteries that run on air are actually quite common, especially among older people. Tiny zinc-air batteries are widely used in hearing aids, where they have replaced toxic mercury-based batteries in providing a small but steady stream of power. They supply more energy for their size than any other battery, because they draw some of their power straight from the air.

All batteries generate power with two chemical reactions: one that produces electrons at the anode (negative terminal) and one that absorbs them at the cathode (positive terminal). This creates a circulation of electrons—an electrical current—from the anode to the cathode. Most batteries contain all the chemicals needed for both reactions.

But zinc-air batteries contain only the anode-side chemical, zinc metal, which is converted to zincate ions and then zinc oxide. This releases two electrons per atom of zinc, which are absorbed by oxygen on the cathode side.

Zinc-air batteries can pack more power into a smaller space than other batteries for the same reason that jets run for longer than rockets. Rockets, which must operate in the vacuum of space, have to carry both fuel and oxygen to burn it with. Jets need to carry only the fuel, since they can pull in oxygen from the air.

The downside is that jets can’t produce as much thrust as rockets, because there’s a limit to how fast they can suck in air. Zinc-air batteries have the same limitation. They can deliver a large amount of energy, but only relatively slowly; they’re like endurance runners, not sprinters—the tortoise to Energizer’s bunny.

Inside a Zinc-Air Battery

Because zinc-air batteries must be open to the air, the water inside them eventually evaporates, limiting their life span. But future cells could use electrolytes made of ionic fluids, which do not evaporate. The potential exists for rechargeable zinc-air batteries with 10 times the capacity of today’s cells.