Alkali metals react strongly with water—but which one creates the biggest explosion? 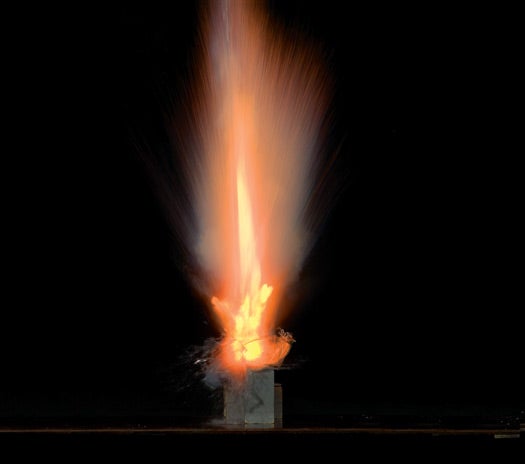 Running down the far-left column of the periodic table, the readily available alkali metals: lithium, sodium, potassium, rubidium and cesium—all generate potentially explosive hydrogen gas when they touch water. The strength with which they react with H2O goes up steadily in the order listed. Lithium just sizzles, whereas cesium explodes powerfully and instantly. You’d expect that to mean that cesium makes the biggest explosion, but it’s not the case.

In fact, the British TV science show Brainiac demonstrated alkali metal explosions a few years ago, and when the producers found that cesium failed to produce a giant explosion, they fixed the results using dynamite. (Which is a lousy thing for a science show to do—it made me feel bad for years because I could never replicate their demonstration.) 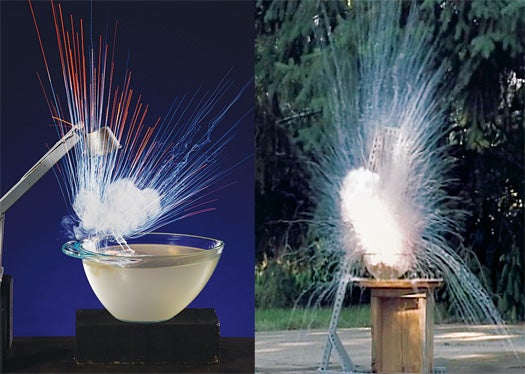 When dropped in water, potassium (left) catches fire instantly and throws molten material several yards, while cesium (right) creates a larger explosion. The reactions of these metals are not nearly as powerful as sodium explosions, however.

The power of the explosion depends on how quickly the metal gets hot enough to ignite the hydrogen gas that the reaction generates. Lithium typically never gets to the threshold of about 930ºF needed to burn the gas, so there’s no explosion. Potassium, rubidium and cesium react so fast that they immediately ignite the hydrogen, resulting in rapid burning but small explosions.

The sweet spot is sodium: It generates lots of hydrogen gas that builds up above the water, and then seconds later the gas ignites, producing a thunderous explosion that throws molten sodium balls in all directions. Good times if that’s what you were looking for; permanent blindness if you weren’t expecting it.

As the old saying goes, in theory there is no difference between theory and practice, but in practice there is. That’s why sodium—the cheapest and least toxic alkali metal—is by far the most fun one to throw in a lake.

WARNING! Handling alkali metals is advanced chemistry–they’re extraordinarily dangerous and can blind you with flaming balls of liquid metal that react with skin and eyes.