How does this copper earring glow without any flame or current? 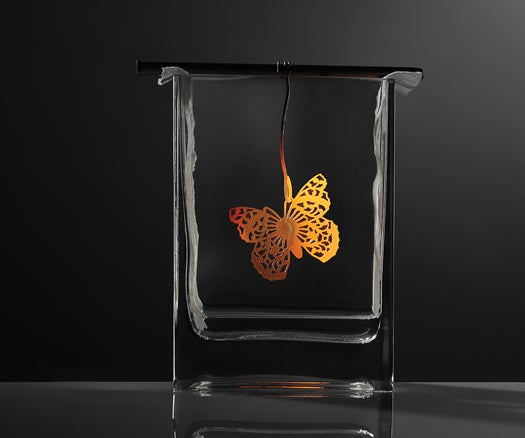 The copper earring you see here had already been glowing bright orange for half an hour when we took the photograph. There is no flame under it, no electric current through it. Underneath is a pool of volatile and highly flammable acetone, but the liquid is not on fire. So where is the heat coming from?

Acetone vapor and oxygen from the air are combining and releasing heat on the surface of the copper, at a much lower temperature than acetone normally burns (but still hot enough to make the earring glow). The copper provides a sort of backdoor that overcomes the resistance (called the activation energy) that normally prevents acetone from reacting, except at higher temperatures.

Copper enables the reaction, but it is not consumed by it. (The earring can keep doing this indefinitely without being used up.) That property defines what it means to be a catalyst.

The most familiar examples of catalysts are the catalytic converters in cars, which finish the incomplete combustion of gasoline using platinum or palladium. Catalysts are important long before the gas makes it to the car, too. Platinum and rhenium are used to “reform” crude oil: to rearrange hydrocarbons into the specific molecules that make up gasoline.

Catalysts greatly reduce the energy, time and complexity of equipment required to do the reforming, and thus make the process far more efficient. In this sense, catalysis can be very green, which seems ironic when describing anything about the petroleum industry. In fact, catalysts can reduce energy use in a wide range of other large-scale chemical manufacturing processes as well.

I like the commonly used slogan “a catalyst for change” because it’s a rare example of a phrase that is scientifically perfect. It describes an organization that makes things happen while continuing unchanged in its mission. That, in simple terms, is exactly what catalysts do.