Bacon: the Other White Heat

You know bacon is delicious, but did you know it contains enough energy to melt metal? 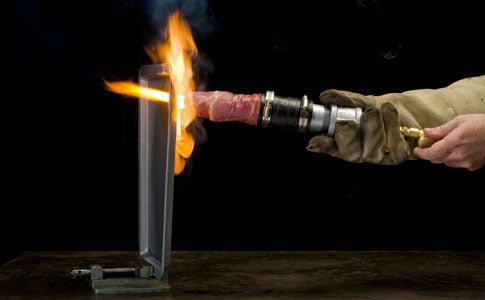 I recently committed myself to the goal, before the weekend was out, of creating a device entirely from bacon and using it to cut a steel pan in half. My initial attempts were failures, but I knew success was within reach when I was able to ignite and melt the pan using seven beef sticks and a cucumber.

No, seriously. The device I built was a form of thermal lance. A thermal lance, typically made of iron instead of bacon, is used to cut up scrap metal and rescue people from collapsed buildings. It works by blowing pure oxygen gas through a pipe packed with iron and magnesium rods. These metals are surprisingly flammable in pure oxygen, releasing a huge amount of heat as they are consumed. The result is a jet of superheated iron plasma coming out of the end of the pipe. For sheer destructive force, few tools match a thermal lance. But iron isn’t the only thing that’s flammable in a stream of pure oxygen.

The author wrapped slices of prosciutto around fiberglass rods, baked them dry, and bundled seven tubes into a bacon fuel core

Bacon is fattening because it contains a lot of chemical energy tied up in its proteins, and especially in its fat. You can release that energy either by digesting it or by burning it with a healthy supply of oxygen. The challenge isn’t creating the heat; it’s engineering a bacon structure strong enough to withstand the stress of a 5,000°F bacon plasma flame.

I used prosciutto (Italian for “expensive bacon”) because it is a superior engineering grade of meat. I wrapped slices of it into thin tubes and baked them overnight in a warm oven to drive off all the water. Then I bundled seven of those together, wrapped them in additional slices, and baked the bundle again until it was hard and dry.

From Table to Torch 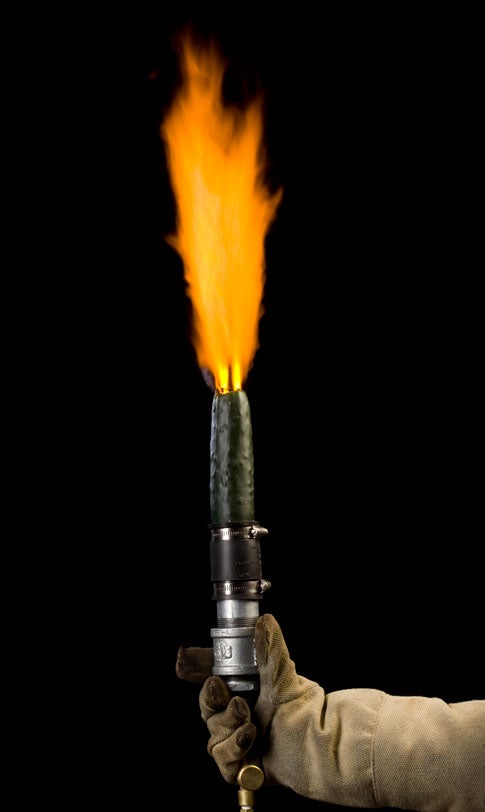 A cucumber makes an even better edible thermal-lance housing, since its outer rind contains the pressure of the very hot flame without burning up

To make an airtight, less-flammable outer casing, I wrapped this fuel core with uncooked prosciutto before attaching one end of it to an oxygen hose. You can’t imagine the feeling of triumph when I first saw the telltale signs of burning iron: sparks bursting from the metal, and then a rush of flame out of the other side as I witnessed perhaps the first-ever example of bacon-cut steel. And the lance kept on burning for about a minute.

It turns out there are much easier ways to do this. For example, while researching how to build a vegetarian lance, I hit on the perfect pipe material — hollowed-out cucumbers. The pressure-containment capacity of a standard cucumber is remarkable, and the smooth skin makes it easy to create an airtight seal with the pipe delivering oxygen to the device. A cucumber packed with beef sticks will burn for almost two minutes, and a completely vegetarian version stuffed with breadsticks, though not quite as long-lasting, still produces a very impressive flame.

The lesson here is that food is a source of serious amounts of energy. Pure oxygen helps release it in a much shorter time than usual, but it’s really the chemical energy in the bacon that makes the steel pan burn. Whether it’s worth building a bacon lance to demonstrate this — well, only you can be the judge of that.

Achtung! Theodore Gray is trained in lab safety. Don’t try this at home. See more of Gray’s work at periodictable.com.