Eat your heart out, Lance. This amateur-built recumbent may soon break its own record by hitting 82 mph 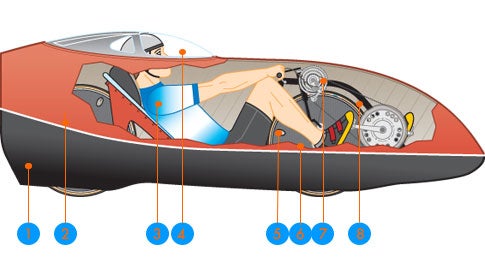 In October 2005, a dozen or so bicyclists will haul butt down a flat two-lane state highway near Battle Mountain, Nevada, reaching speeds of more than 60 mph. That’s no typo. It’s par for the five-mile course at the sixth annual World Human Powered Speed Challenge.

The favorite to go the fastest is Sam Whittingham, a compact Canadian who set the world record-a staggering 81 mph-on a streamlined recumbent called the Varna Diablo II that he rides lying down like a man in a bathtub. His bike, like those raced by most of his rivals, is more DIY than R&D. Its creator, Bulgarian migr George Georgiev, trained as a sculptor, not an engineer, and it shows in the Diablo’s deceptively simple design. Georgiev fashioned the body purely by intuition, although subsequent wind-tunnel tests confirmed its remarkable aerodynamic efficiency. He literally built the bike around his 5’7″ rider, arranging components to minimize its size and, therefore, the hole it punches in the air.

Whittingham’s record has stood since 2002, but Georgiev remains convinced that the Diablo’s speed-ometer can be pushed one more notch to claim the $23,000 .deciMach Prize, offered by a committee of human-powered-vehicle enthusiasts for the first HPV to exceed one tenth the speed of sound (82 mph for this race). If not, G
eorgiev will build Whittingham a new fully enclosed bike, and they’ll try again.

1. The Diablo’s base is a composite tub that serves as the monocoque chassis to which the body and subframe are attached.

2. The body is made from carbon fiber and Kevlar, so it’s light, strong and good at insulating the driver from road rash. (Whittingham has walked away from an inadvertent crash test at more than 80 mph.)

3. Whittingham, a former member of the Canadian national bicycling team, sits on the floor of the tub. His seat back is made of surplus Boeing aircraft flooring.

4. Whittingham steers with handlebars attached to the front wheel and looks out a plastic canopy. This makes the Diablo easier to control than fully enclosed bikes, which have no way to see out and use video screens and remote steering.

6. The Diablo uses a front disc brake [not visible] because at high speeds, conventional caliper brakes would cause the rims to overheat, blowing the tires.

7. The front-wheel-drive
powertrain features a pair of chains that meet at an intermediate gear axle, fitted with a special hub that allows for more than twice as much gear reduction as
a conventional racing bike.

8. Most components are hung on a motorcycle-strength 4130-chromoly-steel subframe bolted to a bracket that’s glued to the tub.

This year’s World Human Powered Speed Challenge will take place October 3 through 8 on a smooth, straight, level stretch of State Route 305 near Battle Mountain, Nevada. Riders have four miles to get up to speed before a timed 200-meter trap. Runs are made between 5 p.m. and 7 p.m., when the wind typically dies down and the road is closed for record attempts. Spectators are welcome. Learn more at wisil.recumbents.com.