University of Warwick researchers have developed a new material that is conductive, piezoresistant, and printable in the latest generation of consumer 3-D printers. 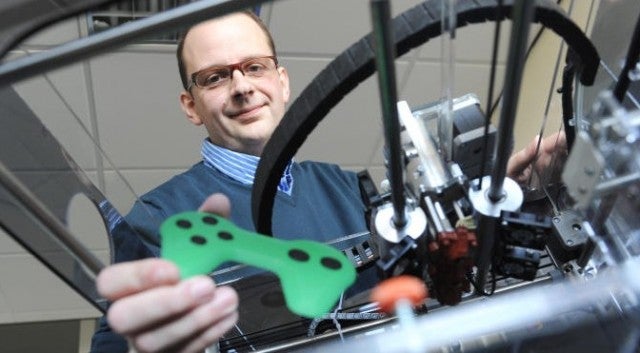 For a long time now, the ability to print electronic circuitry and components on commercially available 3-D printers has been viewed as the development that will thrust 3-D printing out of its current nascent maker space and into the mainstream of both manufacturing and home fabrication. And while it’s already been demonstrated on specialized printers in the lab, researcher at the University of Warwick in the UK have developed a low-cost material they’ve named “carbomorph” that is conductive, piezoresistive, and printable in currently available, consumer-affordable 3-D printers.

Carbomorph is essentially a carbon filler within a matrix of biodegradable polyester, a medium that can pass through the printer head of a machine like the Bits and Bytes BFB3000 that the Warwick team has now used to create everything from touch-sensitive gaming controllers, a motion-sensing glove, and a mug that knows how much liquid is in it. These things are pretty far from printing, say, a smartphone or a computer in one go, yet they represent an important step forward.

For instance, using their multi-head printer the team fabricated its motion sensing glove from polylactic acid (or PLA, a kind of polyester derived form renewable resources like corn starch) and were able to embed it with strips of carbomorph. Because of its conductivity, the carbomorph can be connected to simple circuit boards and the like. And its piezoresistance means that when the strips are bent or otherwise stressed, their resistance changes–and that resistance can be measured by the aforementioned circuit board attached to the glove. The result is a 3-D printed glove with embedded sensor architecture that knows the degree to which the fingers are extended or clenched.

This might be great for motion capture technology or something like that, but think of broader applications like game controllers that could not only be custom printed to fit a user’s hand, but that could also tell not only that the user is pressing a button but how firmly or softly the button is being pressed. This would open up whole new avenues of controllability, enhancing the way we interface with our electronics. With the ability to embed piezoelectric resistance into the very construction of our smartphones, television remotes, and other gadgetry, there are all kinds of opportunities to improve tactile control of electronic interfaces.

The next step here, of course, is the printing of more complex electronic structures, things like wires and cables and eventually batteries and circuit boards themselves, so the final product that rolls out of a 3-D printer is actually a final product. That’s likely still a ways off, but the fact that the Warwick team has embedded electronic sensing capacity into products printed on consumer machines bodes well for that future.

[University of Warwick via ExtremeTech]