Instant Kool-Aid is a Marvel of Technology 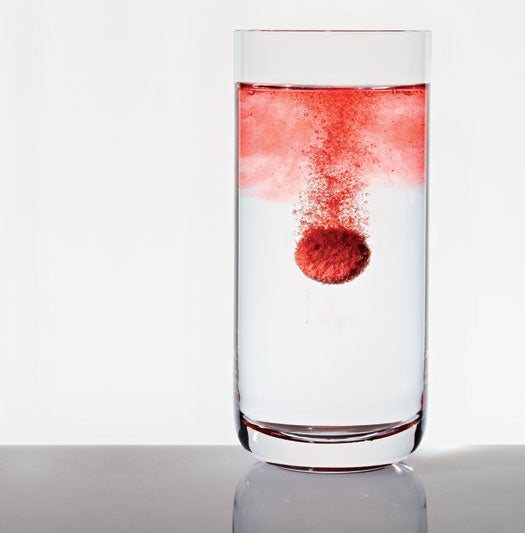 When you think of technology, you probably think of computers and jet engines and such. But there are other feats of engineering that are equally sophisticated, just less obviously so. Instant Kool-Aid, for example.

There are two fundamental problems in creating a small tablet that quickly turns a glass of water into a fruity drink. The first is finding a way to disperse the ingredients without forcing an impatient customer to stir them. The solution is sodium bicarbonate and citric acid, a mixture perhaps best known as the plop-plop, fizz-fizz of Alka-Seltzer. These chemicals react with water to form carbon dioxide gas, breaking up the pill, dispersing its contents, and leaving behind just a small amount of sodium citrate, a harmless substance found in citrus fruits. 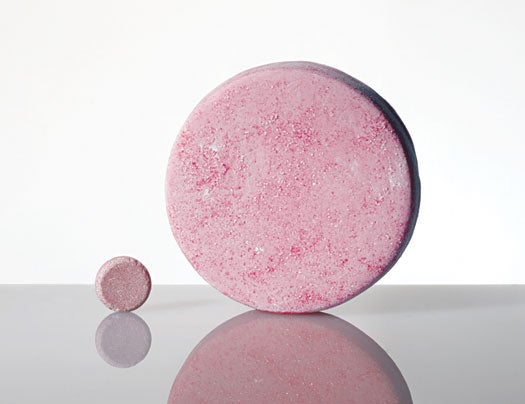 A sugar-based tablet like the one we made would have to be many times the size of an aspartame-based instant Kool-Aid tablet to make the drink equally sweet.

The second problem—making the drink sweet enough—is more difficult. It would take far too much ordinary sugar to fit in a small pill. This part of the problem was solved in 1879 with the chemist Constantin Fahlberg’s discovery of the first artificial super-sweetener, saccharin. Instant Kool-Aid (introduced by Kraft as Kool-Aid Fun Fizz last year) incorporates a more recently developed sugar substitute, aspartame, better known as NutraSweet. Aspartame is 200 times as sweet by weight as cane sugar and represents a very high level of sophistication in chemical engineering; it was discovered by a chemist who was assembling proteins into a polypeptide while trying to design a new treatment for ulcers. All the sweet needed for eight ounces of Kool-Aid fits in a pinch of aspartame.

The drink innovation I’d really like to see, though, still remains tantalizingly out of reach: a pill that heats a cup of coffee. Self-heating coffee does exist, but only in bulky containers that keep the chemicals that do the heating separate from the coffee you drink. Sadly for coffee lovers, no one has yet figured out how to make a mixture that fits in a pill and wouldn’t poison you if you tried to drink it.