Meet your friendly neighborhood Spider-Kid! It’s the stuff of childhood dreams, right? A boy in Cambridge, England, can climb the... 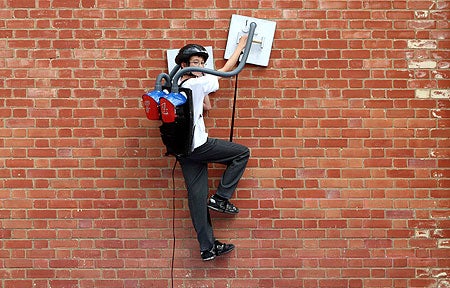 Meet your friendly neighborhood Spider-Kid! It’s the stuff of childhood dreams, right? A boy in Cambridge, England, can climb the walls just like his favorite superhero.

OK, Vacuum-Boy’s powers are slightly less subtle than Peter Parker’s. But you have to love 13-year-old Hibiki Kono’s creativity. He spent five months designing and building his Spider-Man gear from a pair of cheap 1,400-watt vacuums bought at Tesco (like a British Wal-Mart) and some suction pads.

The British press quotes Hibiki saying he used to dress up as Spider-Man when he was younger and he loves all the movies: “It’s great to be able to climb walls like him.”

Vacuum-backpack whirring, Hibiki picks his way along a brick wall, blue crash pad below. He says he would go higher but his instructors won’t let him. As for his mother, she thinks it’s brilliant, he says. “But she won’t let me use it in my bedroom as she’s worried I may pull down the ceiling,” the Sun quotes him saying.

[the Mirror, the Sun]