You Built What?! The Electronic Didgeridoo 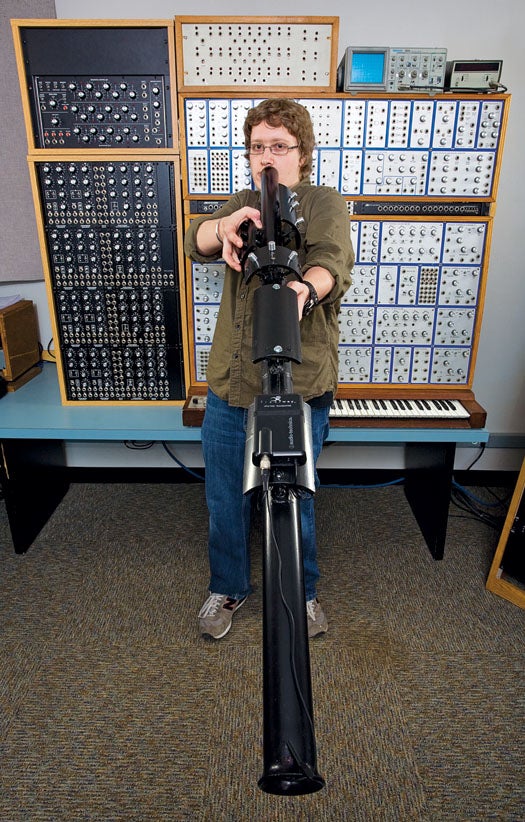 Photographed Kyle at the School of the Art Institute with his electric didgeridoo. Mike Walker
SHARE

Kyle Evans, a 24-year-old artist, bought his first didgeridoo in a small shop in Cairns, Australia, three years ago. The owner helped him pick out one of his handmade Aboriginal instruments, and after Evans taught himself to play, he decided to build an enhanced version: an electronically modified, Bluetooth-enhanced PVC pipe that cranks out didgeridoo-like sound with added digital flourishes.

Traditional didgeridoos are simple wind instruments made from hollowed-out trees. While learning to play the one from Cairns, Evans was also getting into computer-synthesized music, and he noticed similarities between the sounds. His first attempt to combine the two, involving a Big Gulp mug and a USB link to his laptop, proved too cumbersome, so he designed a Bluetooth version instead.

He cut a length of PVC pipe to form the body of the instrument and then mounted several square sections of a larger-diameter pipe to the outside. These platforms hide the wiring for the Bluetooth board and the control knobs that let him tweak the instrument’s steady drone.

When Evans plays, he blows through a beeswax-coated mouthpiece on one end, as with a traditional didgeridoo, and a wireless microphone positioned inside the far end relays the sound to his computer, which outputs sound to a speaker. At the same time, he can adjust the knobs, wirelessly signaling his computer to modulate the notes. He’s thinking of recording original music for it and has performed with it at some small venues. But the one audience he really wants to play it for are the Aboriginal people whose instrument inspired his invention. 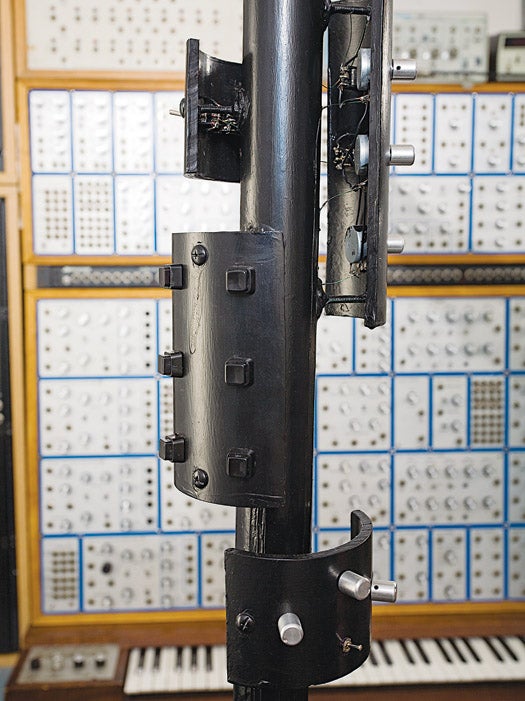 The wiring for the toggle switches and pentiometers, or sound-modulating control knobs, is hidden beneath PVC plates.

Time: 3 Months
Cost: $300
CONTROLS
Evans could have played with one hand holding the didgeridoo and the other on his computer keyboard, but that would have been too unwieldy. He wanted to perform onstage, so he moved the controls onto the instrument. When he adjusts one of the switches or volume-modulating potentiometers, a Bluetooth module beneath the platform relays that change to his laptop. He wrote software that translates the turn of a knob into a modulation of the sound; his laptop sends the synthesized notes through a set of connected speakers.

BODY
Although Evans’s version is the first electronic model that he knows of, the PVC didgeridoo wasn’t his invention. He learned the basics online. He cut out the desired length—longer instruments generate a deeper pitch—molded the beeswax mouthpiece to one end, and heated the other end and pressed it over the top of a wine bottle. That flared the pipe’s end, giving it a bell shape and better sound.

AESTHETICS
His instrument isn’t exactly traditional, but Evans tried to stay in the handmade spirit of the Aboriginal people. He used simple tools like hacksaws instead of precision machines, sketched his design by hand, and painted it all black.

PERFORMANCE
At four and a half feet long, the instrument requires more energy and breath than with most traditional didgeridoos. The bonus, though, is that Evans can give himself breaks. Through the controls, he can signal the computer to switch to feedback and simply hold the last note he played while he catches his breath.