Imagine being able to examine anything you want, at the atomic level, in your living room. If Sacha De’Angeli gets... 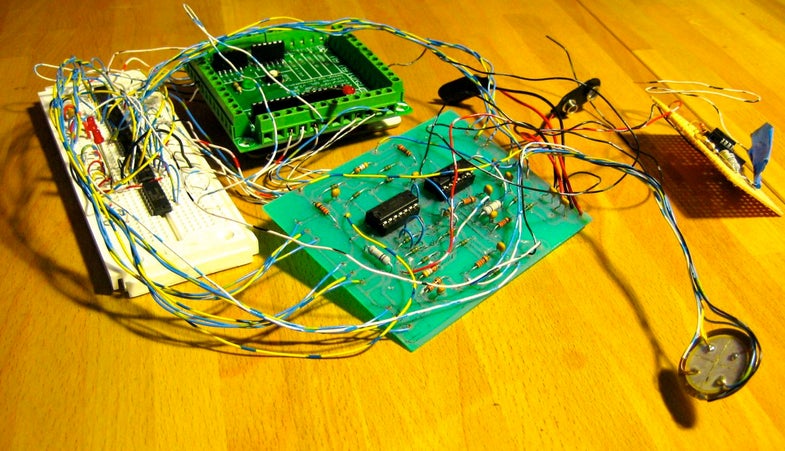 Imagine being able to examine anything you want, at the atomic level, in your living room. If Sacha De’Angeli gets his way, a scanning tunneling electron microscope — currently just the domain of research labs — will be something you can order off the Web, as an easy-to-assemble, open-source kit, for about $1000.

Scanning tunneling electron microscopes — or STMs, for short — are sophisticated imaging tools used in nanoscience and nanotechnology. The heart of the device is a conductive tip, which is guided over the surface to be observed, at a very tiny distance. An applied voltage means that a current flows between the tip and the surface, and the variation of the current reveals clues about the structure of the surface. A computer hooked to the STM processes the data, generating an image of the sample.

De’Angeli, a 34-year-old tinkerer living in Chicago who runs a website called Chemhacker, came up with the idea for the open-source STM while experimenting with creating nanoparticles in his house. He began building the STM in October, at his home and at a nearby hack space called Pumping Station: One, with the assistance of his friends Jordan Bunker and Tim Saylor. “I was trying to make a ferrofluid, and I sort of built a cool recipe to do it, but I wasn’t exactly sure if I made the actual nanoparticles,” De’Angeli says. “You can’t tell what they look like without an electron microscope. Obviously a $30,000 machine isn’t something I can afford for a hobby. I found these projects where people had built scanning tunneling electron microscopes for really not very much money. I started this project I found, that dates back to 2003 by John Alexander, and I started to modernize it a bit.”

Several homegrown recipes abound for building scanning tunneling electron microscopes. One such project, from a research group at the University of Muenster in Germany, is called the SXM; through their website, you can buy a construction kit for 985 euros. But many of these projects, designed by academics, rely on pricey external hardware — like signal generators and oscilloscopes — that the average person might not have. They also don’t always use the most up-to-date technology, and while some have released schematics, none of them are open source. De’Angeli’s project is designed to stand alone, and it is entirely open source, relying on the Arduino, the popular open-source microcontroller board, which is in active use for thousands of projects around the globe. A Python script takes the raw data and pulls it into an image file. D’Angeli’s hope is that average folks — people not affiliated with science departments at all — will start making and using their own STMs at home.

De’Angeli is presenting his project this week at the Open Science Summit in Berkeley. He is careful to note that the open-source STM is still a work in progress, and its first images should be forthcoming within the next few months. “There’s probably some big scary problem that I haven’t been able to think about yet, that’s probably going to come up and bite me,” he says. Considering his tremendous progress so far, it should be finished any time now. “I don’t know the limits of it,” he says. “It’s kind of exciting to see what people will make with it.”