How our readers turned hairpins into resistance units, electric fans into potato slicers, and asbestos shingles into hotplates. 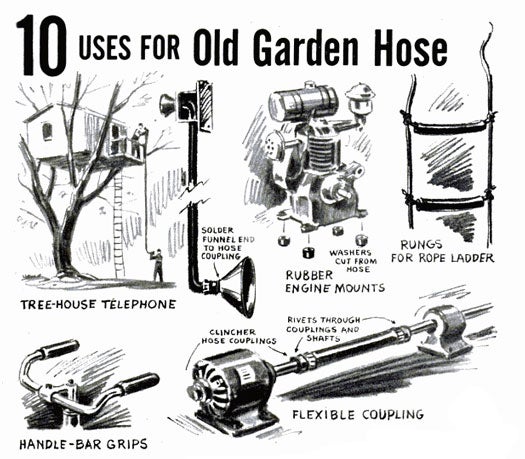 Venture into any apartment, and you’re likely to find an object used for something other than its intended purpose. We’ve seen ground coffee used to repel ants, curtain fabric used as wallpaper, cardboard boxes used as coffee tables, and to the delight of DIY enthusiasts everywhere, a La-Z-Boy converted into a motorized easy chair. While most of us don’t possess the expertise needed to turn chairs into moving vehicles, we’ve all struggled with the question of whether to dispose of an old household item, or to save it in case it came in handy later. Care to guess what PopSci would tell you to do?

We’ve featured some wacky ideas over the past century, including instructions on how to turn razor dispensers into miniature tank models, but most of these projects were proposed by regular people like you and me. During the interwar era, we ran a series of monthly contests that asked readers to devise alternate uses for everyday objects, such as old automobile tires, hairpins, and electric fans. One contestant soldered a hairpin onto his glasses to repair a broken nose piece. Another pinned his daughter’s nose shut for eleven months to correct its stubby appearance. And impressively enough, a cook from Nebraska replaced the blades of his fan with butcher knives to create a potato slicer (now that’s a project we would love to see on video, if home video were a thing in 1919).

After the second World War, we started publishing a “X uses for Y” column where we recommended ways to resurrect various household items. While none of these projects involved freewheeling butcher knives, they project this quaint notion of a simpler time that we love projecting onto the past. Before kids started owning their own cell phones, they could use a garden hose and a couple of cups as a “telephone” line between their tree houses and the ground. Porcelain doorknobs could be used as a pestle for crushing herbs. Spools could be used as jump rope handles. And with a wooden plank, some parchment, a few rubber bands, and an empty coffee can, you could make a toy banjo! All this, just when we were wondering how kids entertained themselves before video games and TV became commonplace.

During the World War I era, we ran a series of monthly contests asking readers to submit ideas for alleviating everyday inconveniences, such as the problem of staying warm, cooling off, and recycling an old automobile tire. When we asked readers to contribute ideas for using extra hairpins, they suggested everything from converting them to test-tube holders, to using them as makeshift corkscrews. Our first prize winner even told us how to turn a wire hairpin into a working resistance unit. Our second prizewinner, whose idea are illustrated on the far left, said that hairpins can be used to repair a broken automobile fan belt.

Those less inclined toward gadgetry were no less creative. One doctor used hairpins as finger splints, while a proud papa claimed that a hairpin fixed the shape of his baby daughter’s “ugly stub-nose”.

This contest, which we ran about a year later, asked readers to suggest alternate uses for an electric fan. Our first prizewinner, who collected $25 for his idea, said that he used an electric fan and wet flannel to turn an icebox into an ice-less refrigerator. Meanwhile, a housewife from Indianapolis turned her electric fan into a hairdryer by making it blow warm air from her kitchen’s gas range. The impressive strangeness doesn’t stop there. Another reader from Nebraska turned his electric fan into a potato slicer by replacing the fan blades with butcher knives.

Just when you thought it couldn’t get more dangerous than a knife-wielding fan, our home workshop section had to publish a misguided article about uses for leftover asbestos shingles. In the office, an asbestos shingle could prevent typewriters and telephones from slipping. In the home, it could be used as a hotplate for cooking or beneath an iron to protect clothing.

Most of the time, extra doorknobs lie forgotten at the bottom of our toolboxes, which is a shame considering their many practical applications. You could use one as a darning egg while sewing, or as a file handle to prevent your fingers from becoming chafed. A porcelain knob could decorate a gatepost, or be used as a pestle for “pulverizing dry herbs,” while a sturdy knob could secure your boat to the boardwalk.

Garden hoses don’t die easily, but when they do wear out, there’s no need to throw out all of that rubber tubing. This feature suggested using pieces of an old garden hose for bicycle handlebar grips, as a tree house “telephone,” (in case the cup and string didn’t cut it), and as rungs for a rope ladder (presumably for the tree house). To prevent splinters from puncturing your children, you could use it as rubber edging along a sandbox. If constructing those DIY projects weren’t enough of a workout, you could also turn your old hose into a gym ring by attaching it to some extra chains.

As girls, we women treasured old thread spools for their uses in dollhouses. With just a few modifications, a thread spool could be easily converted into a miniature dining room set, coffee table, or My Little Pony mane and tail curlers. Our home workshop editor had other ideas, though. With a little bit of paint and an extra wooden frame, you could turn your spools into a toy abacus. Thread spools can be used as jump rope handles (for homemade jump ropes, of course), as pulleys for toys, and as legs for small cabinets. You could even use a thread spool as a handle for that cabinet.

Like thread spools and garden hose, coffee cans are inherently useful around the house. Puncture a few holes along the sides, and your coffee can will become a line marker for a backyard badminton court. Craving barbecue but lacking a grill? Use an empty coffee can as an outdoor cooker by filling the bottom with two inches of sand soaked with gas. On a less hazardous note, you could also turn a large coffee can into a toy banjo by a plank of wood for the fingerboard, and a rubber band or gut for the strings.

Everybody has a bar of soap lying around the house, or at least a disc of leftover soap that just won’t seem to run out. When you’re not cleaning yourself, try using it for the following purpose: to grease nails and screws before working with them, to plug a leak in a home fuel tank, and pick up glass splinters when they’re invisible to the naked eye (just make sure you shave them off the soap afterward). Soap also comes in hand when painting, as rubbing a bit of wet soap on door handles and light switches makes it easier to remove the paint splattered on them. And if you aren’t fond of using gloves, you can dig your fingernails into a bar of soap before painting to ease the task of cleaning your nails afterward.

When not being used for their intended purpose, stepladders function well as temporary furniture. Just ask the woman illustrated on the left, who used it as a pole for her clothesline, for for the church members who who turned a couple of stepladders into a display shelf for their wares. It could also serve as a short footbridge, as a projector stand, and as a creative trellis for your garden.

Wastebaskets aren’t just repositories for trash. They can hold a multitude of other things, such as wet umbrellas, hockey sticks, baseball bats, and miniature trees. During colder months, you can also use a wastebasket to hold newspaper and kindling. And during the summer? As unappetizing as it looks, we recommended substituting a regular picnic basket with a plastic trash can (a clean one, though. Not one that had been unused. This was left unstated, so just trust that it was implied). At least ants and dirt would have a harder time getting into your food.

Speaking of wastebaskets, did you know that your trash can is a gold mine for parts? We encouraged toymakers and home construction enthusiasts to save everything from clothespins, to bottle caps, to plastic eyedropper stems for projects “that would take you a month of Sundays to duplicate from anything else.”

Take a look at the toy tanks on the left. Their bodies were cobbled together from plastic razor blade dispensers, an Elmer’s glue cap, a shaving cream cap, and a dress snap, among other materials. These materials were not only cheap, but they were easy to work with, as you can cut through most bottle caps using a Swiss Army knife or even an industrial-sized pair of scissors.