Tips from a guy who did it. 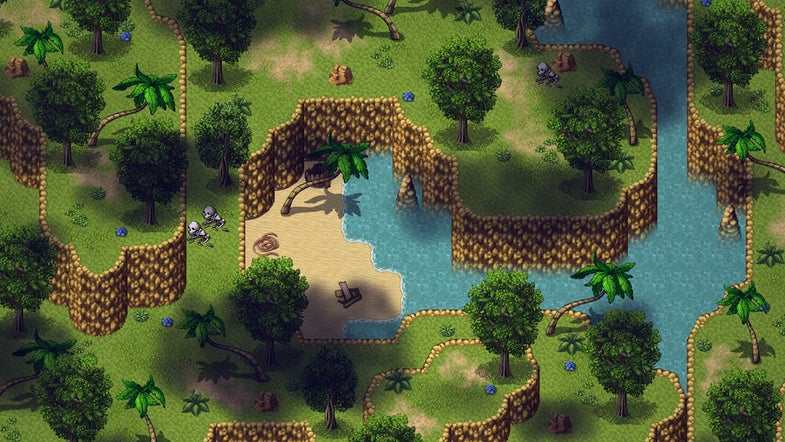 OK before we get started let’s get one thing out of the way. The subject of this piece is our coworker and friend. We like him. This article is not meant to be a review and it is certainly not objective. This is a story about a guy who created an indie video game inspired by those he played as a kid. There you have it, folks. Transparency. Now proceed.

If you’ve got a pulse and a decent memory, you must admit that there are some dreams you had as a pre-teen that you wish you hadn’t given up on for practicality’s sake. It’s the kind of thing you think about rarely, when you read an article about an astronaut or meet a novelist at a party.

So when we learned that our Director of Product Jade Lockwood—of Bonnier Corp., PopSci’s parent company—was wrapping up a project more than two decades in the making, we knew we needed to ask him a few questions. The fact that Lockwood, now 34, decided to build a video game he dreamed up as a middle schooler made our staff that much more curious. Innovation, we love. Geekery, we love. A pitch-perfect throwback fantasy soundtrack—yeah, love that, too.

Lockwood spent thousands of hours over the past six-plus years bringing to life the mythos of his old-school RPG game, Lotia, which came out in June on Steam. We wanted to know how he managed it. I spoke with Lockwood—and of course played the game for, uh, several work hours—to learn about the process, and what it feels like to unleash to the world something of your middle school daydreams.

Lockwood grew up in Brooklyn, gaming with his two brothers. The siblings also spent a lot of time watching movies—he insists they wore out no less than 20 Star Wars tapes from repeated viewings—and playing outside. In fact, as entry fee for running around in the open air, his mother made them write a page-long short story. Lockwood gives a lot of credit to these stories, and his mother. He thinks they were what got him thinking about storytelling in video games.

Plus, she worked at Toys R Us. “She was never into gaming,” Lockwood says, “but somehow brought home the best games.” One of the first “real” RPGs he can remember playing was US Final Fantasy 4, which he started playing when he was 9. A lot of Lotia refers back to that time of initial discovery.

“Some of the dialogue and references in Lotia come from things like Princess Bride and Ghostbusters,” he says. “Stuff from the late ’80s and early ’90s.”

In high school, Lockwood took classes in TV production, website and graphic design, and film editing. After graduating, he decided against college. He spent a year playing video games competitively to pay his rent.

The beginning of Lotia

One of Lockwood’s favorite games was an RPG (role playing game) called Underlight, which he started playing—an average of 35 hours a week, he estimates—when he was 13. At its peak, Underlight had only about 500 concurrent players, and therein was the appeal. Dedicated and respected players could become Game Masters—or GMs—and create the storylines and develop challenges for other players in the game.

“You had to go out and complete that task. If the GMs were pleased with how you fulfilled a task, they’d teach you a new skill. Acquiring skills or leveling up could be a 7-10-month quest.”

At 23, Lockwood bought the rights to Underlight. During this time, he was also managing an internet cafe and online gaming center, so he soon realized a fatal flaw in the game: he loved the story, but its reliance on volunteer GMs, who needed to be aware of what was going on at all times, was unsustainable.

“I had created—along with a group of friends—an entire mythos based on what was originally just anecdotal information in Underlight,” says Lockwood.

Lockwood decided to shut down Underlight and shift his time to developing a new game. This one would have a similarly compelling story, but a more straightforward RPG experience like the Final Fantasy games he grew up with. Lotia wouldn’t rely on GMs for the game to progress. Instead, it would be accessible to as many gaming personalities as possible. A player can go as deep into the lore of the game as they want, or skip the longer pieces of text.

“People skip the cut-scenes, which are pretty cool. Then they say ‘I don’t know what to do.’ Then you have people like myself, who read everything. For Lotia, we wanted to give both those people a good experience.”

When Lockwood explains what people should expect while playing Lotia, he breaks it down into three elements. “You can explore the world visually. You can explore the universe’s lore. You can play with the gear and combat. Or, if you want, you can dig deep into the exploration, combat, and gear, and not pay any attention to the lore.”

Roadblocks—like cycling through three game engines and multiple team members—aren’t uncommon, but they can mean losing months of work. Determined to not let Lotia flatline, Lockwood switched to a game engine called RPG Maker MV, which would allow him to finish the project on his own, even if the rest of the team left.

RPG Maker comes with pre-programmed gameplay mechanics, which can save time, even if you need to churn out custom code to customize it. Vito Galatro and David Schwerstein—the Lead Developer and UI Developer, as well as two other Bonnier employees—helped develop the logic of the game, as well as write the original code for menus and other gameplay mechanics.

“I did less development work than Vito and David,” he says. “They’d program a function or a logic that the character should follow. It was my job to create the map the character walked around on, the book that they’d read, and pick which specifics spots would activate when a player presses a certain button. The hard part, always, is predicting what functions we needed. If we couldn’t foresee that, we could be immediately road blocked.”

So how does it feel to have something so long in the works be out in the wild? “It’s a mixed feeling. I’m glad we’re done. I’m proud that we completed it, and that it has a fair amount of polish to it—even with such a small team and small budget,” he says. “Of course, after you release anything you can pick it apart in 50,000 ways.”

If you’re thinking about embarking on a similar path, keep in mind that Lockwood’s whole work life is managing projects for digital product. It was helpful to already have experience with web performance, coding, logic, and art.

Any regrets? “For the next project,” Lockwood says, “we’ll make sure we have a good marketing strategy. It’s important even when you don’t have a lot to show yet. I was worried about getting hype and then not being able to complete the project, so I held off. If I was going to fail, I would like to fail quietly.”

“Build hype as early as you can. I’d use more social media and I’d reach out to blogs, magazines, and reviewers. That will help your Kickstarter or whatever crowdfunding you are doing,” he says. “I would also stay on top of your Kickstarter with updates. It’s better to have 5,000 people donate $1 than to have 10 people to donate $500.”

Lockwood also encourages aspiring indie game creators to know all the major elements of the project—scope, tools required, play style—before you start. Changing one major element could add months to your timeline and make the project fold in on itself.

For true beginners, Lockwood says, “RPG Maker is a really good foundation tool.” Users can “do a lot of testing without needing a crazy amount of knowledge in any specific skills. There is a community of instructions or code that are open source.”

The next thing you need to do is to articulate your goal. “Are you trying to be the latest, greatest game? If so, that’s a lot harder. For us, we weren’t trying to revolutionize the genre and we got criticized for that. Our goal was to get the story out there. Now that this is done, I wanted it to be something that my kids, when they get a few years older, can actually play and say my dad made this. I wanted to do something for them.”

Lockwood’s work isn’t over yet. Even post-release, he and the rest of the team have been addressing feedback from players and tweaking issues they’ve noticed to smooth out gameplay. While Lockwood’s plans on beginning work on a second game are far away, he says “in the next project we work on, we are going to spice up the features a lot. We wanted to focus on the story of Lotia, but now we can expand on mechanics.”

Lotia is available now on Steam for $8.99. The soundtrack can be streamed on Spotify or iTunes.

If you are interested in playing Lotia, the first 100 people to sign-up for our newsletters via the box below will be given a free Steam Key to download a full copy. Instructions on how to activate your key can be found here.