Your routines might be screwing with your body. Here’s how to fix it.

When to eat, drink, sleep, and think deep thoughts. 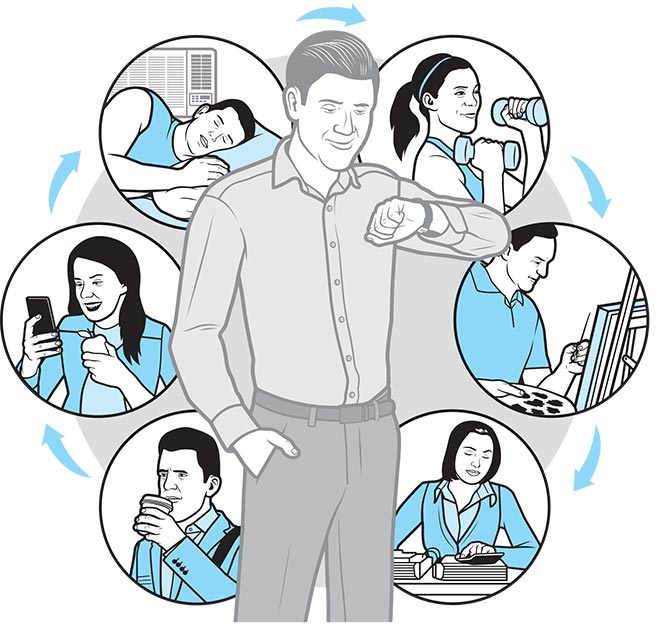 You might think you’re in control of your schedule, but your body evolved to follow a natural rhythm. Sticking closer to that routine can help keep you in tiptop shape.

Sipping caffeine is best done early in the day. Imbibed later, it can reset your body’s clock and prevent sleep. If you’re sure you can take a shot of espresso at 8 p.m. and be snoring by 10, try skipping the caffeine for a few weeks to see what a night of truly good rest feels like.

It’s best to eat your biggest meal early, contrary to a typical American day. Insulin—the hormone that regulates metabolism—peaks in the first half of the day, then steadily drops. So your blood sugar is less likely to skyrocket after a big breakfast than after a comparable dinner.

Around 8 or 9 p.m., our bodies start to cool down, and we sleep better when we have a low core body temperature. But how much shut-eye is ideal? Studies show that those who get six and a half to eight hours are less likely to die prematurely. Eight hours seems to be perfect.

Some people swear by early-morning jogs. But muscle tone is highest around 5 p.m. Even pros get a boost: West Coast NFL teams won more often and by a higher margin in matches after 8 p.m. on the East Coast. Still on Pacific time, their bodies were primed to play.

The evolution of language, religion, and philosophy all started with late-night talks—and research suggests there is still a different cast to our nocturnal musings. So save that short story you’ve been meaning to write for a dark and restless night.

Scientists think we reach maximum alertness between 10 a.m. and 2 p.m., with a peak around noon. For the first few hours after we wake, organs with more basic functions take priority. Once they’re booted up, our brains have a chance to hog some more energy.