How To Hack Your Alarm Clock [Gallery]

From the Popular Science archives: How to make your alarm clock water your lawn, cook you breakfast, turn on a light and more 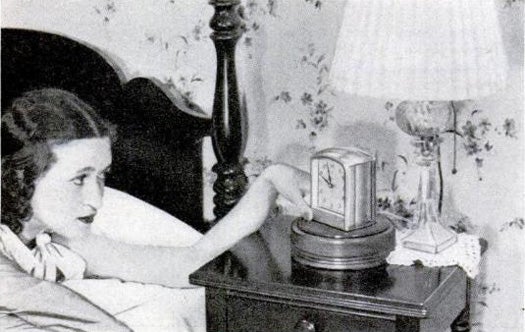 Like anyone who’s ever seen “Pee-Wee’s Big Adventure,” I fervently wish I had a Rube Goldberg machine that made me breakfast for an alarm clock. While vintage PopSci doesn’t have the exact blueprint for that machine, we did cover an alarm-clock attachment that can remotely turn on any electrical appliance, including a stove–meaning you could wake up to the smell of bacon sizzling. Nom.

If breakfast’s not your thing, there are plenty of other tasks you can hack your alarm clock to perform, from watering your lawn to playing music when you wake up. Peruse the archive gallery above for some good ways to put your old alarm clock to use, now that we all use our phones anyway.

Most anyone would prefer waking up to music over a startling, unpleasant beeping or ringing. Before the age of downloadable ringtones, clever DIY-ers still had that option. All they had to do was connect their alarm clock to a phonograph. Setup entails choosing the perfect wake-up music, then clamping the alarm clock’s metal arm to the lever of the record-player just before it touches the disc. When the alarm goes off in the morning, the clock releases the metal arm, the lever touches down and “you are wakened by your favorite musical selection.” Just be sure to change it up once in a while, lest your favorite song be ruined by being associated with waking up.

“Many people need more than an alarm-clock to wake them from sleep. Some need noise, light and water.” Water seems a bit much, but I can attest to the insufficiency of an alarm alone. I always set mine at least an hour before I actually have to get up, knowing I’ll hit the snooze for at least that long. To combat this problem, we suggested this simple, ingenious hack. Just twist a small piece of wire around the socket-switch finger piece of a lighting fixture, and attach a string to the other end. Wind the string around the alarm clock key (it may take you a few tries to figure out just how tightly to wind it), and when the alarm goes off, it will pull the string and switch on the light, “thereby keeping you awake and assuring you of being in the office on time. It is also useful when taking medicine every few hours.”

This might prove dangerous for those prone to quickly falling back asleep after the alarm stops ringing, but it’s great if you’re a quick riser who wants to endure as little noise as possible: You can hack your alarm clock to stop ringing after 10 seconds. Solder a strip of tin to the alarm-setting handle. Then once the alarm goes off and the key starts to wind, it will hit the tin and push the alarm-setting handle forward far enough to turn off the alarm.

Alfred C. Alves of San Antonio Texas invented an alarm clock attachment that uses electricity to start a remote appliance. He fitted an electric switch to the side of the alarm clock, so that the uncoiling alarm spring closes the distance between two electric contacts, and turns on the current to a stove, light or whatever appliance you’d like to connect it to. While you don’t necessarily have to use it to cook your breakfast, that’s obviously the best choice.

Life’s too short to water your own grass. Attach the alarm mechanism of the clock to the valve of a garden hose using a spring-operated lever. Then, when the alarm goes off, the mechanism will release the lever, turning the hose on or off. Also useful for cruelly soaking the paper boy, if you’re into that sort of thing.

If, when you wake up in the morning, your arms are simply too weak to lift your alarm clock from your bedside table and shut it off, wait until you regain your strength and then build this mini-turntable and mount your alarm clock on it. Now you can just lazily swivel it back and forth from the comfort of your bed and never have to exert your atrophying arm muscles again. The turntable is made of two faceplate turnings held together by a wood screw. Be sure to attach a piece of antiskid rug to the bottom so the clock doesn’t slide off your nightstand, forcing you to get out of bed.

Perhaps the most perplexing alarm clock hack found in the pages of Popular Science is this elaborate setup that will automatically close your bedroom window at a specified time. Cool, yes, but so many questions are left unanswered: Is the closing of the window intended to wake you up? If not, couldn’t you just close it yourself once you got out of bed? Do you only need fresh air while asleep? If you can discern the purpose of this invention and would like to replicate it yourself, use a bolt to hold the window up, and mount an alarm clock just below it. Solder a piece of stiff wire to the alarm-winding key and line it up with the hole in the bolt, so when the alarm goes off, the key turns, sliding the bolt away from the window. Use an iron pipe to weight the window, so it will slide down on its own when the bolt is removed.

This clock, which GE calls the “Ever-Set,” automatically resets itself every night. If you want to sleep in on the weekends, all you have to do is pull out the pins for Saturday and Sunday, and the alarm won’t go off. At $12, it’s a steal.