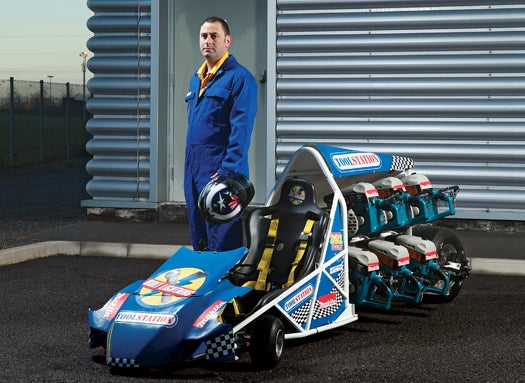 Barry Lee was sitting at his desk one day when his boss at British retailer Toolstation stopped by with a new assignment. He had heard about a drag-racing series for vehicles propelled by power tools, and he wanted to win. “You’re the man to do it,” he told Lee, an IT support manager. Three years, countless man-hours and several versions later, Lee finished Bolt Lightning, a disc-cutter-powered dragster with one speed: fast.

Lee got the job because of his experience working on cars, but he also recruited colleagues with engineering and electronics backgrounds. One of their models for an earlier race was a two-tool setup, but they wanted more power to ensure a victory, and that meant more tools. Four disc cutters didn’t seem like enough, while eight added too much weight. In the end, they settled on six.

After several months of chassis design, early last year Lee and his team acquired some 6.2-horsepower gas-powered Makita disc cutters. They experimented with a mock chassis by screwing together broom handles and pieces of wood, and stacked two rows of three disc cutters instead of installing them all in a single row as they had originally planned. With the cutting discs removed, the motors would turn fan belts attached to the driveshaft, generating 37.2 total horsepower.

The next six months were a blur of wiring, body-forming, chassis fabrication—they scrapped the wooden version for steel—and hunting for parts. “It was live, eat, sleep, drink, and breathe dragster for a while,” Lee says. But this summer, Bolt Lightning dusted more than a dozen competitors, winning the Silverline Power Tool championships with Lee at the wheel. The boss was pleased.

To start the kart, Lee first has to pull the ripcord on each of the six disc cutters, all of which run on two-stroke, fuel-powered engines. “It gets crazy noisy,” he says. At that point the engines are idle. 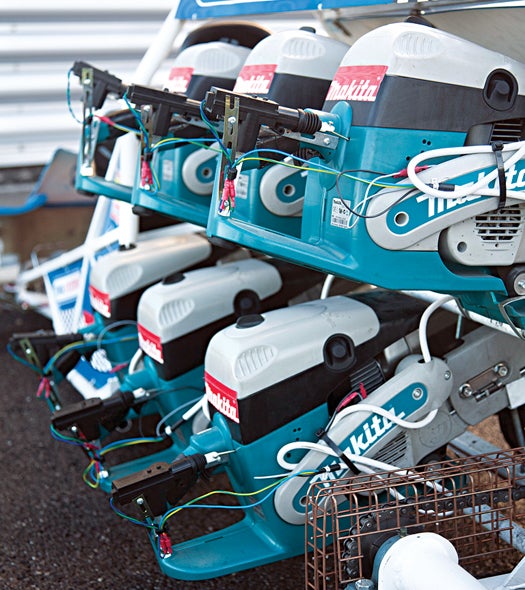 A seventh disc cutter was added to increase acceleration

Bolt Lightning uses an electronic throttle system. Once the engines are idling, Lee straps into the seat and hits a foot pedal that flips two switches located underneath. This activates electronic motors, normally used in the door-locking mechanisms in cars, that the team added to the tools, flicking on the throttles. There’s no accelerator or shifting of gears, so as soon as the switches are flipped the throttles go from 0 to 100 percent.

Lee says the builders chose a three-wheel design to save weight and allow easy access to the drive mechanism at the back. But they weren’t totally focused on staying light; the roughly 450-pound chassis was engineered for strength. The front end began life as a go-kart, but Lee and his colleagues cut and molded the rear of the kart, the roll cage and the engine housing from different kinds of high-strength steel.

The dragster is slightly unstable through turns because of the three-wheel design, and the fact that half the engines sit at the height of the driver’s shoulders. Lee has had it up on two wheels on a few occasions, he says, “but in a straight line, it’s very stable. 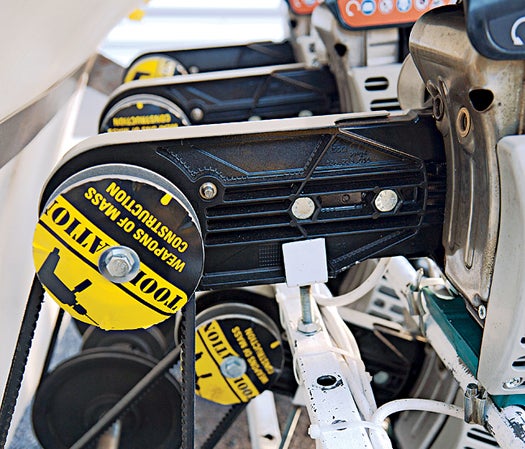 The main race takes place on an outdoor runway in Ilchester, England. Entrants complete several 100-meter straightaway sprints over two days, and Bolt Lightning turned in the top times and speeds. Lee used an Android app on his smartphone to clock the top speed as he drove. The runway had extra room, which was fortunate: The converted go-kart does have a brake, but it’s designed for a much lighter and less powerful vehicle.