You Built What?! A Truck-Sized, Street-Legal Radio Flyer Wagon 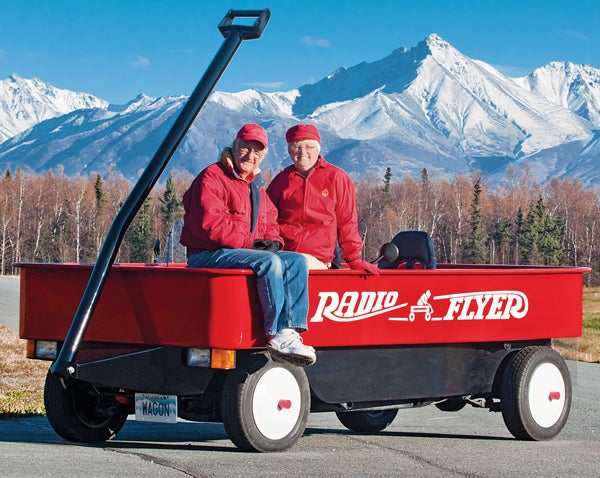 Alaskan Judy Foster had long been asking her husband, Fred Keller, to restore her late father’s old fishing truck, but he always refused. “All that work, and you’d still only have a ’76 Mazda pickup,” he said. In August 2009, he came to her with a different idea: Let’s transform it into a large-scale, highway-legal replica of a Radio Flyer wagon. She gave the concept the nod.

Keller, an amateur engineer, had already designed and built several award-winning planes, and he and Foster had recently begun restoring old cars, including a Model T. The wagon idea stemmed from a Radio Flyer/hot-rod hybrid they had spotted at an Oregon car show. Keller loved it, but the perfectionist in him thought that it would be more fun and challenging to build a replica of the wagon that got all the details, from the scale all the way down to the angle of the handle, exactly right. He started the project by ripping apart the old Mazda pickup, ditching the body, and adding new tires, spark plugs, fan belts, radiator hoses and a number of other parts. The squarish shape of the scaled-up wagon wouldn’t have quite matched the more rectangular, elongated truck frame, so he bought a portable band saw at a pawn shop and cut off everything behind the rear axle.

To build the wagon’s frame, Keller used marine plywood and, for the rounded corners, a mix of PVC foam, epoxy and fiberglass that had been sitting in his garage since his airplane days. The finished wagon is 13.5 feet long and nearly six feet wide. Now the couple cruise in their
roof-free wagon-car whenever weather permits. “My dad would be proud,” Foster says, but she doubts he’d take it fishing.

Both Foster and Keller played with red wagons in their youth, and they wanted their vehicle to be as similar to the original as possible. They not only worked out an exact-scale replica of the handle, constructing it from PVC piping and fiberglass, they also ensured that the angle in its upright position matched that of the original wagon. One difference: Their handle bolts directly to the frame, so it stays in position.

For the car to be highway-legal, it needed real wheels, but Keller made them look as much like the wagon as possible by affixing red laundry-detergent bottle tops to the hubs (he saw one in his garbage during the build and realized it was perfect).

The pair first tried out seats from an old Kia, but Foster didn’t like the look. Eventually they found sleek black racing seats at a local auto- supply store and installed those. The steering wheel is an actual wagon wheel welded to the Mazda’s original steering column.

The real Radio Flyer doesn’t have a windshield, so Keller was hoping they could just go with motorcycle helmets and face shields. The Alaska DMV insisted otherwise, so he cut a windshield out of Lexan plastic and tried out a few different ways of attaching it through test runs on a nearby airstrip. The DMV approved, and they got their vanity plate: “WAGON.”