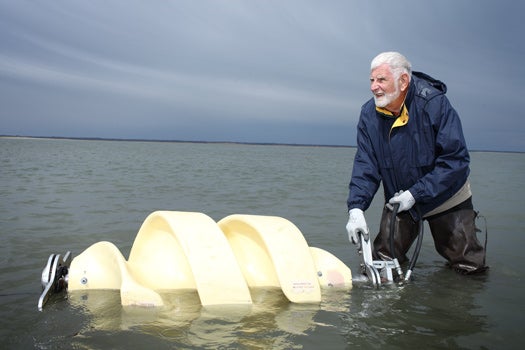 W. Scott Anderson spent the past five decades creating complicated machines for manufacturing, including a lipstick labeler and a plastic-straw maker. So when two years ago the 77-year-old industrial engineer invented a fish-friendly underwater turbine that looks like a giant screw, it seemed a cruel twist of fate that every manufacturer he approached said it was too complex to produce economically. But that didn’t stop him.

There are a handful of companies using windmill-like turbines to capture the untapped energy in tidal streams, bays and inlets and convert it to electricity. But these projects tend to be huge and expensive, and require permanent installations that can disrupt marine life.

The auger creates enough torque to drive a hydraulic pump, which moves oil out of a storage tank through pipes to drive a generator located outside the water. Excess oil pumped in strong currents is diverted to an accumulator tank until the current slows, when it’s used to keep the generator turning at the proper speed.

Anderson’s ECO-Auger is based on a much different design, enabling it to access energy that regular water turbines can’t. Rather than using blades, it produces power when the current spins a drill-shaped device called an auger, which has tapered ends that don’t harm fish. Instead of using gears to drive an attached generator, a hydraulic pump in the nosecone pumps high-pressure oil to turn a generator outside the water. The arrangement lets the turbine capture energy in shallow waters, and to tether to bridges and other structures so that the auger is relatively easy to lift out of the water for maintenance. Whereas most bladed turbines need at least 30 feet of water to operate, Anderson’s smallest units need only 10.

Anderson had used a revolving horizontal corkscrew to feed plastic to machines in his New Jersey factory and knew that ancient Egyptian farmers used augers to irrigate high ground. To see if a water-driven auger could do the job of conventional turbine blades, he tested an eight-inch plastic prototype in a pool, measured the torque, and ran it in a tank of minnows. When he saw that it worked without affecting the fish, he spent four months in his garage handcrafting a two-foot-diameter polyurethane-and-fiberglass auger that in a test captured 14 percent of the water’s energy—not as much as the 25 to 45 percent that huge propeller-driven turbines can get, but Anderson says that percentage will go up as the auger’s diameter increases, and for a fraction of the cost.

Recently the inventor bought two cast-aluminum molds to make the first few six-foot-diameter prototypes and has persuaded a plastic-molding company to produce them in segments. If he gets approval, he will have them spinning in inlets around the world this year. In a 10-knot current, each will generate five to seven kilowatts, enough to power four to six homes. Most important, he wants to show that his method of mass production is sound, so he can move on to the full-scale, 16-foot-diameter augers. “We already know it will work,” he says. “Now it’s just a matter of doing it.”