Most robots covered on this site push the envelope of technology, by working in space or eerily replicating flesh-and-blood humans.... 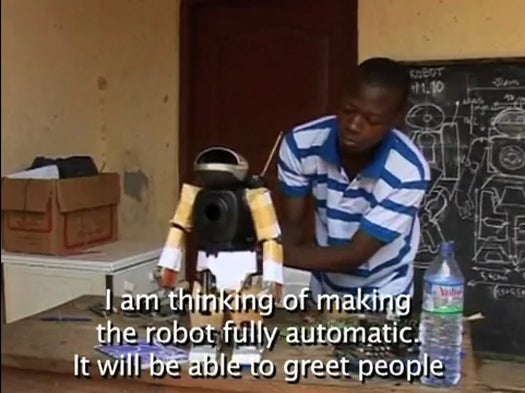 Most robots covered on this site push the envelope of technology, by working in space or eerily replicating flesh-and-blood humans. But for Sam Todo, a student in the Togolese Republic in Africa, robotics is a way to put the outdated technology found in the garbage to new, innovative uses. In this video, Todo displays a humanoid robot he created almost entirely from discarded TV parts.

For now, the robot only walks in straight lines, but Todo is working on future versions that automatically greets people and naturally avoids objects in its path. More than simply showing off his own amazing ingenuity, Todo hopes his robot serves as an inspiration to other Africans to pursue science, math, and engineering.

But, once again, don’t take my word for it! In the video below, check out Todo’s robot in action, and hear in his own words the inspirational power of his little bot.