A couple of weeks ago, we wrote about the BeetleCam, a remote-controlled roving camera that lets photographers take pictures of... 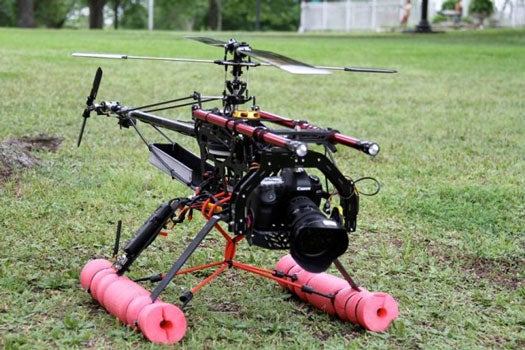 A couple of weeks ago, we wrote about the BeetleCam, a remote-controlled roving camera that lets photographers take pictures of wild animals up close. While clawed critters present one sort of obstacle to a great photo, the perfect shot is often blocked by something we can’t even see: gravity.

Eric Austin, a videographer from Texas, has come up with an ingenious solution for shooting HD-quality aerial videos. His DIY helicam is a Canon DSLR camera rigged up to a remote-controlled helicopter.

Although other videographers have assembled their own helicams, Austin’s video attests to his skills in maneuvering the helicopter as well as in filming.

To build the helicam, Austin used a basic tripod-style camera screw to attach the helicopter to the camera. That allows the camera to detach from the mount, and thus sustain less damage, during a crash. He also wrapped pink foam to the copter’s legs to to soften landings.

Austin adjusts the camera settings prior to takeoff. For still photographs, he uses an external timer to activate the shutter to take one image per second. Since it uses an electric motor, his helicam is quiet, clean, and doesn’t attract much attention.

Although the following video has already enthralled videographers and viewers alike ’round the ‘net, Austin continues to plan for helicam’s future capabilities. Down the road, a second person will control, pan, and tilt the camera while Austin operates the helicopter. His test helicopter has a built-in autopilot GPS that will enable precision flying and altitude hold.