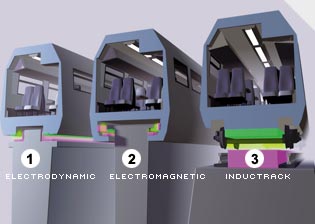 The debut of the worlds first
commercial magnetic levitation rail
system in Shanghai, China, in January
is raising hopes that the United States may finally get onboard.
Urban roadways have never been more congested. A levitating train like Shanghai’s, boosters argue, might be just the ticket for short hops between cities or travel between them.

China’s new 450-passenger maglev train sprints 19 miles between Shanghai’s financial district and its international airport. Reaching 270 mph — albeit for mere seconds before it begins to brake — the train cuts travel time from 30 minutes to less than 8. Ticket price: $6.

If anything, the $1.2 billion project shows that after 30 years, it’s no longer about the technology: Where there’s money, there can be maglev. “Get that Buck Rogers notion out of your head,” says Christopher Brady of Transrapid International USA, whose German parent supplied the technology for the Shanghai shuttle. “This is really just about building a bunch of bridges and slapping some electronics on top.”

Price has long been a hefty barrier, but now American funding appears likely. This fall the Federal Railroad Administration plans to award $950 million to either Pittsburgh or Baltimore-Washington to build the nation’s first maglev line. Transrapid would supply the technology; the project could be complete by 2010. But cities like Atlanta, Las Vegas and Los Angeles are also eyeing maglev. General Atomics in San Diego
is now developing a low-speed version called Inductrack
that relies on passive permanent magnets, like the kind
on fridges. Since the 100 mph train is designed to scale steeper slopes and make tighter turns than its wheeled competitors, General Atomics says cities would spend less money on grading land or knocking down obstacles to accommodate it.