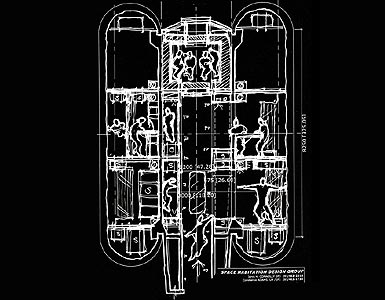 Give the crackerjack engineers of NASA a problem and they’ll solve the hell out of it. But what if the problem they’re solving has nothing to do with the astronauts’ quality of life?

In June 1997 NASA brought in a team of architects to work on the design for an inflatable habitation module suitable for long-duration spaceflight or as an extension node on the International Space Station. NASA engineers had already drawn up the initial plans for TransHab, but architect Constance Adams demonstrated that these proposals made poor use of the space and would likely have a negative psychological effect on the crew. What could have been a devastating clash of cultures turned into a smooth marriage: The architects respected the engineering constraints, and the engineers began considering the critical human factors. In the end, the collaboration led to an ingenious space module and a model for future projects.

Pre-existing Design
A group of structural engineers had drawn up the initial designs before the architects got involved. There was no up or down in these plans–astronauts in different areas would be inverted relative to one another. Besides being disorienting for the crew, this design also constituted an inefficient use of the total volume.

Adams:
“It was clear that the horizontal variation really wasn’t going to do it. They were having a hard time even drawing a picture that showed both sides, where one person would be upright and the other would be upside down. If you can’t imagine it, don’t design it.–

Adams’s Critique
Adams first worked to improve the original proposals, rearranging certain elements to suit the crew. Here (refer to slide show picture 2), she shows two potential seating arrangements meant to enhance socialization. Even these layouts, however, would be too cramped and awkward.

Adams:
“When you’re buying a family home, you don’t want one where the dining room is only four feet wide.”

Redesign: Room to Move and Breathe
Adams factored in the two possible roles for TransHab: as a long-duration spacecraft and as an ISS extension node. She included a central core in which crew would travel to and from the ISS, a radiation shelter surrounded by potable water for a Mars flight, social and meeting rooms, vertical sleeping quarters, and enough space within the rooms for astronauts to stretch out their arms. Another of Adams’s goals was to design a space that could house a total of 12 astronauts–six ISS and six Mars-bound crew–for the pre-mission periods when Trans-Hab is docked.

Adams:
“What are these guys going to need to do during their six-month trip to Mars? With a horizontal scheme, you couldn’t draw all these people doing all these things. Here, every single cubic meter of the volume is being utilized.”

Final Proposal
The final design incorporated the changes suggested by the architects–the astronauts can move, work, exercise, sleep, and socialize freely–while also adhering to the engineering requirements. Adams contends that the final product was a success because each team internalized the guiding principles of the other.

Adams:
“There’s a harmonious sense about the structures and the design that doesn’t come just from the architects.”