We test 4 vehicles to see how well they keep their distance.

Adaptive cruise control may be the future, but it’s not that future. You know the one: The fantasy future of highways that control traffic electronically while drivers kick back like limo passengers. Try that with one of these cars and you’ll wrap yourself around a tree.

Instead, think of adaptive cruise as a full-time digital co-pilot, actively monitoring the traffic ahead and adjusting the throttle-or even applying the brakes-to help you maintain a safe distance from the car in front of you. Should your closing speed exceed the system’s braking limits (most supply up to 20 percent of maximum braking), an alarm warns you to take evasive action.

Obviously, any system designed to assume some of the driver’s responsibility for safe driving is fraught with technical challenges and liability pitfalls. We decided to assess the first four adaptive cruise systems in production, found on the Mercedes-Benz E500, Jaguar XK-R, Infiniti Q45 and Lexus LS430.

There were two types of sensors in our fleet: The Europeans use radar; the Japanese, laser. Radar-based systems bounce microwaves off the target vehicle; lasers read the reflection of the car ahead. Radar has a slight advantage on paper because it’s unaffected by dense fog, heavy snow or rain, or thick smoke and the like, but then drivers should not be using cruise control in those conditions anyway.

The trickiest bit of engineering: accurate target acquisition. If the scanned field is too broad, the system will pick up vehicles in other lanes; if the sensor scans too far forward, it will pick up oncoming traffic around curves, causing needless deceleration.

To determine how well the technology works, we conducted three real-world tests. The results are encouraging, especially from the radar-based systems.

Car ahead is traveling at 45 mph. What is the highest overtaking speed at which the test car’s cruise control will decelerate fully without driver assistance? (4 points)

Arrival Speed: 80 mph Comments: Good response and good braking. The response time was unchanged whether the interval setting was long, middle or short.

Arrival Speed: 70 mph Comments: Responded with vigorous braking, slowing the Jag well before the car ahead. Target acquisition seemed a bit later than in the Mercedes or Infiniti.

Arrival Speed: 70 mph Comments: Slow to react and braked less vigorously than the others, leaving less margin to the car ahead.

Test car is traveling at 55 mph. A second car veers into the lane immediately ahead at 45 mph. How responsive is the test car’s deceleration sequence? (4 points)

The Infiniti’s alarm went off and braking response was good, requiring no driver assistance.

Braking was instantaneous and strong. No alarm went off. Remaining gap to the car ahead was the best.

The Lexus responded with an alarm and immediate if lazy braking, bringing it close to the car ahead and requiring driver assistance.

The E500’s reaction was excellent, with powerful braking. No alarm needed. Stopped with generous distance to car ahead.

The test car, traveling at 55 mph, approaches a motorcycle traveling at 45 mph ahead. Would adaptive cruise control detect this small profile? (4 points)

The Q45 acquired the target quickly, slowed, then inexplicably lost the target and reaccelerated (confirmed in three
successive tests).

The Jaguar acquired the target immediately and braked vigorously, leaving an ample, safe interval to the bike ahead.

The LS430 detected the motorcycle quickly. It decelerated gradually, coming rather close to the bike.

Our test was not scientific, but was designed to assess the real-world usability of adaptive cruise technology. Testing took place about 50 miles north of New York City, near West Point, on four-lane paved public roads. The location allowed for moderate traffic conditions, as well as an assortment of turns and hills. The weather on testing day was clear and sunny, and all the roads were dry. Speeds were measured using the in-car speedometer; no additional equipment was used. 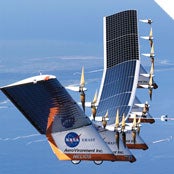 HIGH FLYER
On Aug. 13, 2001, AeroVironment’s Helios, built with NASA, flew to 96,863 feet, higher than any non-rocket-powered airplane ever had. Helios’ 14 tiny propeller motors draw power from 62,000 solar cells. Researchers plan to equip the 247-foot-wingspan craft with a fuel cell so that it can stay aloft for several months.
Vehicles