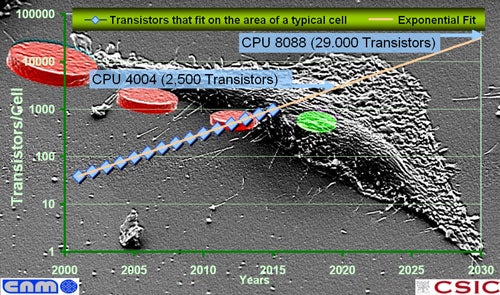 Experiments found that living human cells can ingest or receive injections of silicon chips and continue functioning as usual for the most part. More than 90 percent of chip-containing HeLa cells — the first immortal human cell line derived from a poor, cancer-stricken woman – still survived a week after receiving their silicon loads.

Other studies have tested nanoparticles inside living cells. But silicon chips allow for much easier integration of electronics and mechanical parts, say scientists at the Instituto de Microelectrónica de Barcelona in Spain.

The study published in the aptly-named journal Small opens the doors for possibly putting microprocessors and other silicon-based devices inside cells. That could lead to promising developments for both micro-computing and medicine.

It may also represent a small step toward fulfilling several of the Pentagon’s wishes set forth by DARPA, including engineering immortal controllable synthetic beings with genetic kill-switches. Maybe those mad science dreamers need to think smaller than cyborg beetles.