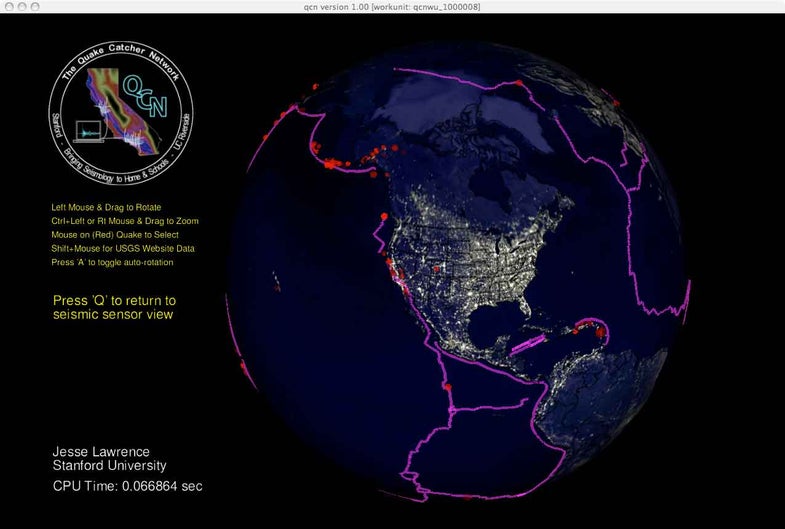 Here’s one genius computer program you might consider pushing virally for science’s sake. The “Quake Catchers” program aims to make earthquake detection a lot easier and cheaper by taking advantage of accelerometers built into MacBooks and other newer laptops, the Los Angeles Times reports.

The accelerometers that are embedded in everything from iPhones to the Nintendo Wii aretiny devices that detect movement. Having software that takes advantage of the tiny devices on thousands of laptops could complement the current system of earthquake sensors installed along fault zones.

Elizabeth Cochran, an earth scientist at the University of California in Riverside, got the idea of harnessing accelerometers for an earthquake network by watching the “Seismac” program on a friend’s MacBook. But whereas Seismac allows you to shake the MacBook and get accelerometer readings for giggles, Cochran hopes “Quake Catchers” can help science and maybe save lives.

The “Quake Catcher” software is designed to record all vibrations on a computer, but only uploads the info if many computers in the same geographic area record “dramatic shaking.”

If the idea catches on in schools, businesses and homes, it might even become part of an early-warning system that detects the outward ripple of an earthquake. Even laptops that don’t have accelerometers can get a $50 sensor with a USB cable that acts similar to an accelerometer.

About 1,000 people have already signed on as “Quake Catchers,” and Cochran’s group hopes to possibly blanket California and beyond. That doesn’t mean we won’t still need our quake-proof buildings, but the software represents readily adaptable technology that’s available now. We’ll just keep dreaming of our active cloaking that counters earthquakes.

Check out the Quake-Catcher Network here.